By entering the next election in a joint list with the students of Rabbi Meir Kahane, chairman of HaBayit HaYehudi Rabbi Rafi Peretz has betrayed the Jewish people and turning his party into a home of racism. 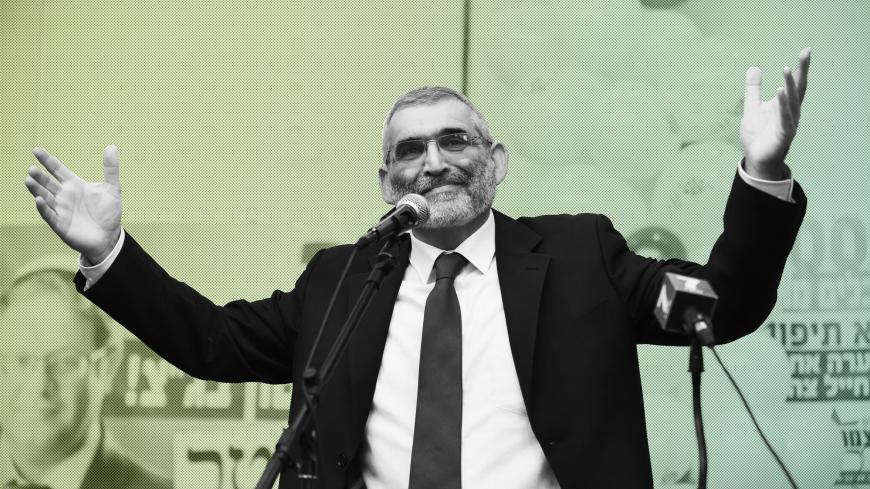 In preparation for the upcoming election on March 2, the chairman of HaBayit HaYehudi, Education Minister Rabbi Rafi Peretz, decided that his party would run as part of a joint list with Otzma Yehudit, a party that failed to pass the electoral threshold in last September’s election. Much has been written over the last year about the racist Otzma Yehudit party. Due to pressure from Prime Minister Benjamin Netanyahu, it ran as part of the Union of Right-Wing Parties last April (together with the HaBayit HaYehudi and the National Union parties), as part of a concerted effort to save the right's votes from factional splintering.

Netanyahu’s jockeying on behalf of Otzma Yehudit before April’s election reeked of political bribery. The prime minister meddled in the affairs of other parties, promising their members rewards if they ran as a single list, to get Peretz to run together with Otzma Yehudit. He even gave Eliyahu Ben Dahan of HaBayit HaYehudi the 28th slot on the Likud list, with an agreement that right after the election, he could switch back to his own party. The state attorney general, already busy with all the other cases facing Netanyahu, did not intervene in this particularly flawed agreement.

The Union of Right-Wing Parties won just five seats in last April’s election, and none of Otzma Yehudit’s representatives entered the Knesset. In last September’s election, Otzma Yehudit decided to run independently. It received 83,000 votes, which may have been worth two seats, but was still not enough to get them across the electoral threshold.

The first polls leading up to the new election this March show that HaBayit HaYehudi and Otzma Yehudit will not pass the threshold if they run separately. The numbers seem to have motivated them to run together, with Itamar Ben Gvir of Otzma Yehudit filling the number-three slot on the joint list. Ben Gvir is infamous for hanging a photo of mass murderer Baruch Goldstein in his home. As a young man, he infamously showed off the emblem that he ripped off Yitzhak Rabin’s car, promising, “We got the car. We’ll get to Rabin too.” It now looks like he will soon join the Knesset, and may even get a powerful position that he has long coveted: chairman of the Knesset’s constitution, law and justice committee.

While the radicalization of the Zionist right is nothing new, Peretz' decision to cooperate with the party representing the disciples of extremist Rabbi Meir Kahane is a new low. In doing so, Peretz is effectively uprooting the most basic principles and ideals of the religious Zionist movement. Unlike the ultra-Orthodox parties, the religious Zionist movement advocated for Zionism first and foremost. Only then did it advocate for Judaism, the Torah and the Land of Israel.

In an article published by Arutz 7 in May, soon after the April election, Rabbi Yair Kartman wrote, “Yosef Burg was one of the most prominent leaders of the religious Zionist movement. He was once asked, ‘What are you more: Zionist or religious?’ He responded, ‘We are the hyphen that connects the two.’”

Under the late Burg’s leadership, the National Religious Party participated in both Mapai and Labor party governments until 1976, after F-15 fighter jets from the United States landed in Israel on the Sabbath. The NRP then voted for a no-confidence motion in the government. While the motion did not pass, Rabin, then prime minister, had no choice but to fire them from his government. It was the first time that religious considerations such as the violation of the Sabbath had superseded Zionist considerations, the fighter jets purchased by Israel after the Yom Kippur War being considered vital to Israel’s military superiority. It was also a landmark in Israel’s strategic security alliance with Washington.

Even after the Likud and Menachem Begin came to power in 1977, the NRP under Burg continued to represent religious Zionism, not messianic Zionism. It was a centrist movement that included members of the religious Kibbutz movement, the long-established agricultural settlements, and city folk who lived a religious Zionist lifestyle. The settlements were not yet at the center of the national discourse, and the hilltop youth were not scurrying across the territories to create illegal outposts. However, as the divisions and rifts within the religious Zionist camp intensified, so did the party’s nationalist wing, which moved to seize a key position in the movement. Settlers and the ultra-Orthodox Zionists assumed control of key party institutions and shifted the movement toward its current preoccupation with the territories. By November 2008, when the NRP became HaBayit HaYehudi, the messianic right was already the main faction in the party.

As minister of education, Peretz is charged with ensuring that Israeli students in the state's both secular and religious educational systems are taught the values of democracy, tolerance, respect of the other and minority rights. But Peretz is actually inviting the disciples of Kahane into his home — the same Kahane who often said that if there is a conflict between being a Jewish state and a democratic state, then democracy can go to hell. If there is a chance that his party will not pass the electoral threshold, Peretz will be willing to embrace the racist followers of Kahane, everyone else be damned.

Peretz’ move prompted furious responses from senior HaBayit HaYehudi party activists and local government officials. They argued that Peretz is joining forces with extremist elements just so that he can maintain his position as party chairman, and called on him to overturn the decision to run together with Otzma Yehudit as a joint list. A very important modern orthodox leader, Rabbi Benny Lau — the nephew of former Israeli Chief Rabbi Israel Lau and cousin to the current chief rabbi — may have been born into and raised in the National Religious Party, but he still saw fit to write this scathing response: “HaBayit HaYehudi announced publicly that it no longer serves as a home to the Jewish people, but only to a certain sector that identifies with the racist ideology of Rabbi Meir Kahane.”

Everything that Netanyahu planted and Peretz tended is now being reaped by the likes of Itamar Ben Gvir.