Has Netanyahu outsmarted himself in push for right-wing merger?

Prime Minister Benjamin Netanyahu is pushing right-wing parties to unite ahead of March elections, but his past success at encouraging such a merger might thwart his efforts this time around. 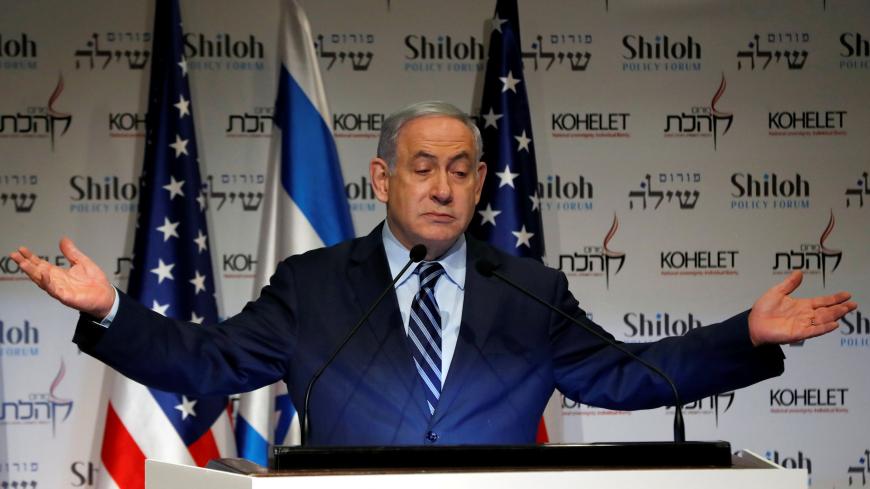 Less than three hours after Labor-Gesher and Meretz announced that they will run on a joint ticket in the March 2 Knesset elections, the co-leaders of the New Right, Defense Minister Naftali Bennett and former Justice Minister Ayelet Shaked, announced that their party will run independently, rejecting a merger with other parties on the political right. According to a Channel 13 news report on Jan. 13, their decision angered Prime Minister Benjamin Netanyahu, who has pretty much dictated every move on the right for the past year.

As a reminder, ahead of the April 2019 elections, after Bennett and Shaked broke from HaBayit HaYehudi to form the New Right, Netanyahu urged the new leader of their former party, Rabbi Rafi Peretz, to join with Otzma Yehudit (Jewish Power), the party founded by the fascist disciples of Rabbi Meir Kahane and long ostracized for its racist views. Netanyahu’s goal was to ensure sufficient support for HaBayit HaYehudi to make it into the Knesset. In fact, the prime minister was the one who paved the way for the abomination of Otzma Yehudit's rehabilitation. Denunciations in Israel and elsewhere, even by his friends and allies at the pro-Israel AIPAC lobby in Washington, failed to sway Netanyahu from his efforts. For him, every vote was kosher, and all means were justified in achieving the end of maintaining power.

Netanyahu promised Peretz the moon and the stars, including naming him education minister if he ran on a ticket with Itamar Ben-Gvir, an Otzma Yehudit leader and fervent admirer of Baruch Goldstein, the settler who massacred Muslim worshipers in Hebron in 1994. In February 2019, as Netanyahu courted Ben-Gvir, it was reported that Ben-Gvir had even been promised a seat on the public panel that approves judicial appointments.

Peretz ultimately caved to Netanyahu’s pressure, although he was never wild about the joint ticket. In return, Netanyahu placed Rabbi Eli Ben-Dahan, from HaBayit HaYehudi, on his Likud list of Knesset candidates. In other words, the prime minister gave HaBayit HaYehudi a free pass at the expense of his own party. The various mergers and aspirations notwithstanding, the results were disappointing: HaBayit HaYehudi and Otzma Yehudit together garnered the equivalent of five Knesset seats, which was not enough for Netanyahu to form a majority coalition, resulting in his decision to call a second round of elections for September.

For the September balloting, the Peretz-Ben-Gvir union, which also included the far right National Union of Bezalel Smotrich, fractured. Peretz, who, as noted, was never fully on board the first time with running with Ben-Gvir, refused to promise the Kahanist party top slots on the newly configured right-wing list of candidates running on the new Yamina joint ticket, which also included Bennett and Shaked. Thus, Otzma Yehudit ran independently. The 83,000 votes garnered by Kahane’s students, 1.88% of the eligible votes cast, were insufficient for their party to cross the electoral threshold of 3.25%, meaning its representatives failed to make it into the Knesset, and all their votes were binned.

Now, ahead of the third round of elections within a year, things are getting even more complicated for Netanyahu. The left has united, but the abomination he approved last year is now foiling a similar union on the right. Thus the move that his fans cheered ahead of the April 2019 elections as nothing short of brilliant could turn out to be a double-edged sword in March 2020.

Polls in recent weeks indicate that if HaBayit HaYehudi and Otzma Yehudit run separately, they will both fall short of the vote threshold. This led the two parties to conclude that they must join forces. On Dec. 20, Peretz and Ben-Gvir issued a video of them smiling, arm in arm, announcing a joint run in March. It is unclear whether Netanyahu engineered the move, but its implication was clear: The Jewish state’s education minister had joined forces with a fascist party whose representative would be in third place on the joint ticket. If the merger generates sufficient votes, the man who pulled the hood ornament off the car of Prime Minister Yitzhak Rabin in 1995 and promised to next deal with Rabin himself will become one of the Knesset’s 120 members. In a Jan. 10 interview with Yedioth Ahronoth, Peretz was effusive with praise for his former and current partner. “Ben Gvir is a very soft person, relaxed, humane and considerate. He’s mellowed,” he said. “He is no longer a Kahanist in the simple sense of the word. He is legitimate.”

Peretz had also been in talks with Bennett, offering him leadership of a broad union of all the Likud’s satellite parties on the right. Bennett, who aspires to remain defense minister once a new government is formed, realized that he would only be able to command such a prize if his party attracts a relatively large number of votes. On the other hand, he also understood the tremendous damage he would sustain if he agreed to take Ben-Gvir and his friends under his auspices. Polls Bennett commissioned reportedly indicated a loss of three Knesset seats for the Likud if the smaller parties were to run on a joint ticket, and he decided to run without them despite the risk it poses for the right-wing bloc.

Netanyahu, still deeply involved in the machinations on the right, is currently busy trying to arrange Knesset immunity for himself against prosecution on bribery indictments. Whether the Knesset Committee formed this week rejects his request or whether the issue will be shelved for debate by the Knesset elected on March 2, the key question is whether he will achieve this time what he failed to achieve in the two 2019 elections — a majority of 61 Knesset seats for his Likud and the other right-wing and ultra-Orthodox parties. Meanwhile, the left, for which Netanyahu has deep derision, has managed to overcome its differences and merge.

The political right is in a mess. On Jan. 14, with a Jan. 15 deadline looming, reports emerged that talks on a joint run by HaBayit HaYehudi and the National Union had failed and that Smotrich had agreed in principle to run with Bennett. If that happens, the joint Peretz-Ben-Gvir ticket is unlikely to cross the electoral threshold. For Netanyahu, it means he may not get another chance to fix the damage.