Ahead of September elections, Israel’s religious right is busy examining their current positions and alliances and whether to continue with the United Right. 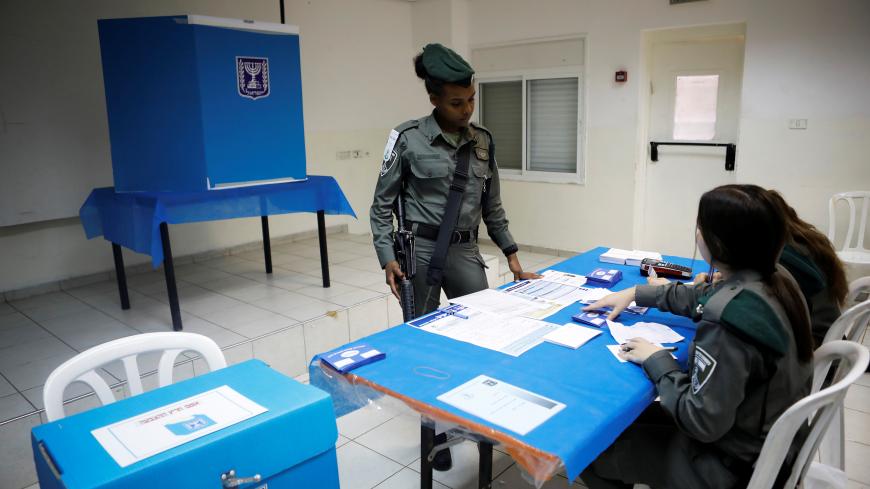 A member of the Israeli Border police prepares to vote in Knesset elections a day before polling stations open in the rest of Israel, Beit Horon settlement, Israeli-occupied West Bank, April 8, 2019. - REUTERS/Nir Elias

The next few weeks will bring news of whether the religious Zionist parties decide to continue as the United Right — the alliance that Prime Minister Benjamin Netanyahu forged from HaBayit HaYehudi, the National Union, and Jewish Power — or whether the more moderate HaBayit HaYehudi will join its former leaders, Naftali Bennett and Ayelet Shaked, who left it before the April elections to establish the New Right.

Many in the moderate religious Zionist camp view a merger with Bennett and Shaked as a much more natural fit and are trying to convince Rafi Peretz, HaBayit HaYehudi's current leader, to part ways with Bezalel Smotrich, chair of the National Union, and Itamar Ben-Gvir, the Jewish Power representative. Smotrich and his small National Union faction call for annexing all of the West Bank and offering Israeli citizenship only to Palestinians who will pledge allegiance to Israel. Jewish Power, founded on the racist teachings of Rabbi Meir Kahane, had to make changes to its platform to avoid disqualification from elections. Compared with these two factions, HaBayit HaYehudi is more moderate.

HaBayit HaYehudi calls for annexing West Bank settlements, but its agenda is also influenced by the leading rabbis of the national-religious stream. In leaving the party, Bennett and Shaked were in part trying to extract themselves from the latter. They sought instead a party that would include secular and traditional Jews and would not advocate religious coercion in any way.

In February, Netanyahu had pushed for the union of the national-religious factions, foreseeing that without it, the three parties would separately fail to pass the vote threshold for entering the Knesset. He did so despite widespread protests, including in his own party, against his efforts on behalf of Jewish Power and its senior candidate, Michael Ben-Ari, who was disqualified by the Central Election Committee and by the High Court because of racist statements.

On a practical, electoral level, Netanyahu was right. The United Right won five mandates, while Bennett and Shaked's New Right failed to meet the vote threshold. A senior member of HaBayit HaYehudi who spoke with Al-Monitor said the discussion will now turn to the character and path of his party. The question, he explained, is whether to allow the “Smotriches,” as he called them, to control the agenda of religious Zionism, to drive away moderate religious and traditional voters, to behave in indecorous ways and to scare the public with visions of a state governed by Jewish religious law and run as “in the days of King David,” to quote Smotrich.

On June 2 at a speech at the Merkaz HaRav Yeshiva for Jerusalem Day and on the following day in a radio interview, Smotrich said that a state governed by Torah law should be established in Israel. On matters of state and religion, Smotrich actually advances positions that are more extreme than those of the ultra-Orthodox. His Torah law statement even led Netanyahu to react, tweeting that Israel would not become a Jewish-law state. Smotrich's associates leaked that with that statement he had ruined his chances of being appointed justice minister, a position he had hoped to occupy in order to revolutionize the legal system.

Indeed, Netanyahu announced the appointment of Amir Ohana of the Likud to head the Justice Ministry. The appointment of Ohana, an openly gay man, was another move by Netanyahu to try to show that he will not be cowed by the dictates of the religious. On the other hand, the day after Ohana's appointment, Netanyahu's associates claimed that Ohana’s appointment was only temporary in that he would not retain the position in the next government if the Likud forms it.

Meanwhile, Netanyahu intends to name Peretz the temporary education minister. This sparked the ire of Smotrich, who tweeted that according to an agreement with HaBayit HaYehudi, he, not Peretz, was supposed to have received the senior post at the Education Ministry and mocked Netanyahu’s credibility.

The incident signaled to senior members of HaBayit HaYehudi that they should work to join Bennett and Shaked, based on the assumption that together they could pass the vote threshold without the National Union. According to briefings and leaks from associates of Peretz, who were angry at Smotrich for opposing his appointment as education minister, the situation had been close to exploding. Peretz, however, preferred to postpone the battle and announced that he had nothing to do with the leaks and that he continues to stand “shoulder to shoulder” with Smotrich, who thanked Peretz but demanded the firing of the staff who had criticized him.

Netanyahu, who opposes a break-up of the partnership in favor of a solid union of the religious right, met with Peretz and Smotrich on June 6 and promised to look into the possibility of naming Smotrich temporary minister with an additional benefits package. According to a Likud source, however, Netanyahu insisted on Peretz being education minister and on Smotrich toning down his comments.

Bennett in contacts with Peretz had proposed various options, including his preference that only HaBayit HaYehudi and the New Right run together. New polls show that Bennett and Shaked could get six mandates heading the New Right, but one should interpret these polls cautiously because they had erroneously predicted that same number of mandates in April’s election. It appears that Bennett won’t reject joining Smotrich’s National Union, if Peretz insists, but the more moderate elements of that joint list, that is, Bennett-Peretz, would be much stronger. Smotrich would be pushed down on the list and in the allocation of roles in the next coalition.

As for Jewish Power, HaBayit HaYehudi leaders had from the start disliked the merger Netanyahu forced on them and only agreed to it after they were promised another Knesset member placed on Likud's list. Bennett’s position is clear. He believes that Jewish Power will drive away tens of thousands of moderate voters and that its ideology is far from the mainstream of religious Zionism. Thus, he shouldn’t run with it. Smotrich is deliberating the way forward, with his people saying that while Jewish Power didn’t turn out enough voters in the April elections, the votes the party got should not be lost.

To calm everyone down, Bennett has announced that the negotiations for combining the right-wing parties are on hold for now, but at the same time, he is looking at the possibility of joining Moshe Feiglin’s Zehut. The polls for the April balloting had predicted impressive results for Zehut as well, but in the end, it got only three mandates, thus failing to pass the vote threshold of four mandates. Most of its supporters are right-wingers, and the union with Bennett seems natural.

The prediction is that to avoid losing any votes on the right, Netanyahu will again push for a full union, meaning a joint list of at least four religious Zionist parties, but without Jewish Power. Such a merger would allow him to conduct a strong campaign without fear of damage to the religious parties and to draw additional support from the right. It would also relieve him of dependence on Avigdor Liberman, the situation that in the end led to elections being called for September.