In an effort to guarantee a 61-seat majority at the Nov. 1 elections, opposition head Benjamin Netanyahu mediated and pushed far-right Religious Zionism and ultranationalist Itamar Ben-Gvir to run on one ticket. 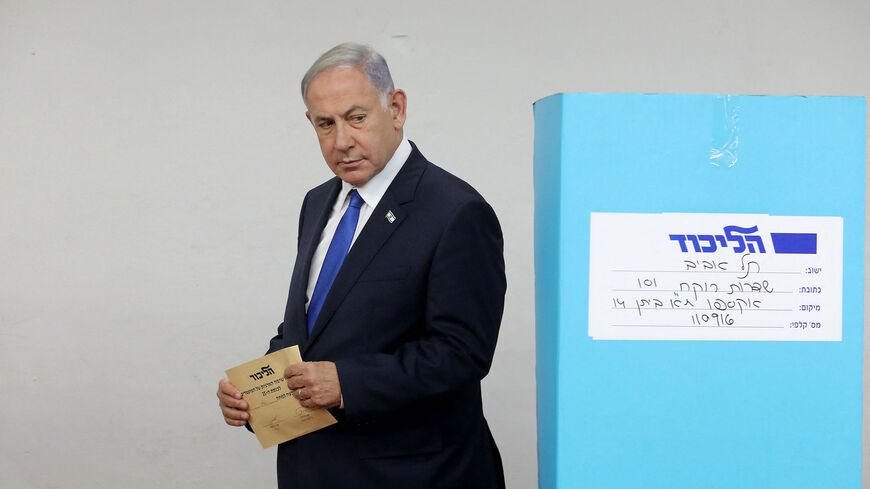 Just before the start of the Sabbath, in the early evening of Friday, Aug. 26, an agreement was signed merging the tickets of two radical right-wing parties ahead of Israel’s Nov. 1 elections.

The deal between the Otzma Yehudit (Jewish Power) party led by Knesset member Itamar Ben-Gvir and Religious Zionism party head Knesset member Bezalel Smotrich was mediated by opposition leader and former Prime Minister Benjamin Netanyahu. It was signed using WhatsApp and no photo of the event was made available, for good reason. Although the deal provides Netanyahu with an electoral safety net by ensuring both parties are elected to the Knesset, bolstering his prospects of a Knesset majority, it hands his opponents an advantage by tainting him as a sponsor of the radical, racist right.

Evidently, Netanyahu is willing to take that risk because he has little choice if he wants the 61 Knesset seats that will send him back to the Prime Minister’s Office. Given the declared refusal of his left-wing and centrist opponents to join a future government with him at the helm, he was forced to maximize the full potential of the right-wing constituencies of these two parties and of the two ultra-Orthodox parties, Shas and United Torah Judaism (UTJ).

The joint party run by Ben-Gvir and Smotrich provides Netanyahu with another advantage: It leaves him free to poach voters from their parties in order to beef up his own Likud, which has been losing ground in the polls, while still maximizing the political potential of the right wing. In other words, the merger between Religious Zionism and Jewish Power should yield (according to polls) well beyond the Knesset threshold of four seats. Thus, no votes are lost. Netanyahu, for his part, could nag away at their electorate without fearing that they won’t enter the Knesset.

This would be significant after the elections, allowing Netanyahu to lead a bloc far bigger than that of his opponents, especially to open up a lead ahead of the centrist Yesh Atid party led by caretaker Prime Minister Yair Lapid, currently polling second to the Likud.

Netanyahu engineered a similar merger between the two parties prior to the 2021 elections, but negotiations between them in recent weeks had run aground, and polls suggested that if each ran separately, Smotrich’s party might not garner sufficient votes to make it into the Knesset, endangering Netanyahu’s comeback bid.

It took just two hours to overcome the differences between the two men and seal the deal. Netanyahu himself was surprised at the speed with which it happened.

The deal began taking shape Aug. 23 when Netanyahu realized time was not on his side: Ben-Gvir and Smotrich were squabbling in public while his Likud was losing steam. He decided to step in, sending two trusted Likud lieutenants, Knesset members Yariv Levin and Yoav Kisch, to soften up Ben-Gvir and Smotrich.

Once sufficient progress had been made, Netanyahu invited the two to his home in the upscale community of Caesarea. The meeting was ultimately moved to the nearby home of a friend of Netanyahu to prevent reporters or photographers from documenting the two men’s arrival or departure. While the cameras were pointed at Netanyahu’s villa, the real drama was taking place a few doors away.

Smotrich arrived first, and once he gave the greenlight, Ben-Gvir headed for Caesarea, bringing with him his four small children, who were invited to use the pool while the grownups talked business. Inside, things moved fast. Netanyahu was very keen, presenting both sides with poll results indicating that separate runs on Nov. 1 might leave their parties out of the Knesset, an outcome he described as a great threat to prospects of a homogenous right-wing, religious government.

Under the agreement, Smotrich will head the joint slate and the two parties will have equal representation on its list of candidates. The merger would be technical in nature, allowing Smotrich and Ben-Gvir to run two separate Knesset factions after the elections.

Following the meeting, Netanyahu was spotted leaving his friend’s house, casually dressed in black, marching energetically toward his own home.

Netanyahu did not serve merely as a mediator. He was a side to the deal. According to various media reports, he pledged that if he achieves a 61-seat Knesset majority, he would form a government with their two parties rather than opting to bring in parties from the opposing bloc, such as the National Union alliance led by Defense Minister Benny Gantz.

Speaking with reporters after signing the agreement, Ben-Gvir said he could have upped his demands given the recent flattering polls showing Jewish Power with as many as eight or nine seats, “but the bottom line is that this is not about me. I believe the step we took brings us closer to a right-wing government.”

Ben-Gvir added that Netanyahu had realized “the key to his victory lies with us. If we are strong and big, Netanyahu will be able to form a right-wing government, and if not, then he will not be able to. That is why I do not believe Netanyahu has any interest in harming us.”

Initial polls immediately after the deal was announced suggest Netanyahu’s move was essential but not conclusive. A survey commissioned by the Maariv newspaper showed Netanyahu’s Likud with 32 seats if elections were held today and the alliance between Ben-Gvir and Smotrich with 12. That would still only bring his bloc to 59 seats (with the seats of the ultra-Orthodox parties), two short of the majority he needs, raising the specter of a sixth general election within less than four years.

The Jewish Power-Religious Zionism alliance essentially places Netanyahu at the head of one large camp: right-wing, conservative, religious and ultra-Orthodox. While a clear advantage vis-a-vis his natural constituents, this is also Netanyahu’s great weakness among centrist, non-religious voters deterred by Ben-Gvir, an unrepentant right-wing racist who views himself as the ideological successor to the late ultra-nationalist Israeli-American Rabbi Meir Kahane.

Netanyahu’s opponents were quick to make use of this deal as a strategic weapon, with photos of the Netanyahu-Smotrich-Ben-Gvir trio carrying dire warnings of a backward, reactionary government. Yesh Atid issued a warning against a Ben-Gvir government takeover.