Most of the Arab-Israeli public supports toppling Prime Minister Benjamin Netanyahu at any cost, but the latest rockets from Gaza might complicate this mission. 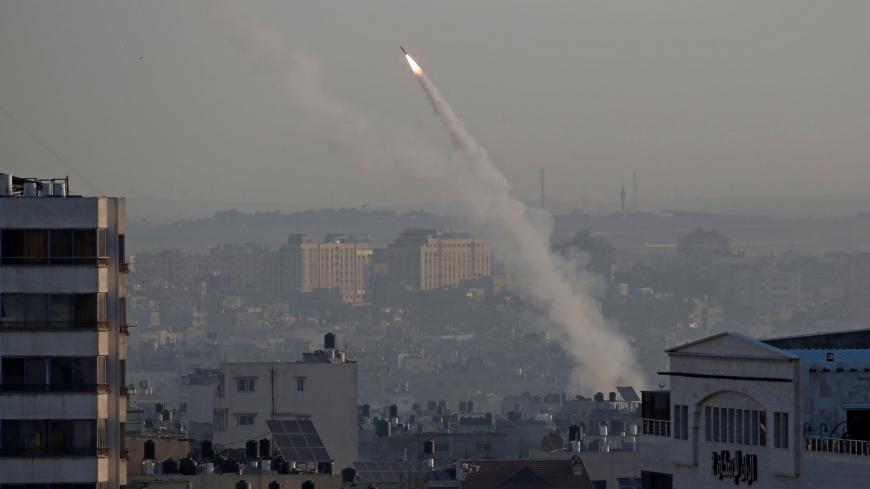 Tensions between Israel and Gaza escalated the morning of Nov. 12 with the assassination of senior Islamic Jihad member Baha Abu al-Atta and a retaliatory barrage of rocket fire on Israeli towns in the south, the lowlands and metropolitan Tel Aviv. As it happened, the escalation comes in the midst of coalition talks and while members of the Joint List are considering supporting a Gantz-led minority government. One might wonder whether the Joint List’s Knesset members remain free to reconsider their interests as Israeli Arabs who want to integrate into Israeli society by offering outside support to the minority government headed by Blue and White’s Benny Gantz. Or does it mean that they have shifted their focus to their brothers and sisters in Gaza, leaving the possibility of a minority government to collapse?

Despite Prime Minister Benjamin Netanyahu and Benny Gantz' attempts to form a new coalition, the option of a minority government headed by Gantz keeps hovering in the background. It got a big boost late last week. Just moments before the start of the Sabbath on Nov. 8, Netanyahu surprised everyone by appointing New Right senior Naftali Bennett as defense minister. It is hard to forget how critical the Likud was of Bennett just one year ago. The party went so far as to declare Dec. 18, “The security of Israel rises above politics, and the Defense Ministry is not some way to find a job for Naftali Bennett.” It is obvious to everyone that the sole purpose of the appointment was to prevent Netanyahu’s 55-seat bloc from falling apart.

Then, on the night of Nov. 9, it was Yisrael Beitenu leader Avigdor Liberman’s turn to steal the show. The wildcard of the election dropped a bombshell of his own, in the form of an ultimatum to Gantz and Netanyahu. His started with a proposed compromise that Gantz accept President Reuven Rivlin’s guidelines for a unity government and that Netanyahu abandon his bloc. Liberman said that if either side rejected this compromise, he would immediately throw his support behind the other. It looks like he is determined to avoid a third round of elections no matter the cost, and this ultimatum is his way of preparing to blame Netanyahu and the Likud if he decides to join forces with Blue and White.

“The current situation is leading to new elections, which is the worst possible option,” Knesset member Eli Avidar (Yisrael Beitenu) told Al-Monitor. “It is now up to us to choose the least bad option.”

This seems to be how the idea of a minority government with an expiration date is taking shape and being made acceptable to voters. It is impossible to ignore Netanyahu's successful campaign of delegitimization against Israel’s Arab citizens, claiming that they should not be able to impact the formation of the government. Measures considered standard and legitimate in any democratic country in the word, such as joining a coalition, are deemed worthy of condemnation when it comes to Israel’s Arab citizens and their representatives. Take the heckling to which Gantz was subjected in the ultra-Orthodox town of Bnei Brak when he attended the wedding of the son of Knesset member Yaakov Asher (Yahadut HaTorah) on Nov. 11. The jeers included such gems as “Go to the Arabs!,” “Terrorist!” and “Go to Ahmad Tibi and Ayman Odeh.” Knesset member Gabi Ashkenazi, who is number four on the Blue and White list, was subjected to similar treatment on a visit to Ashkelon a day earlier. Protesters there heckled him with, “Leftist, get out of here! You’re joining up with the Arabs! Just Netanyahu!”

It seems safe to assume that the heckling is just a taste of what is waiting for all the members of Blue and White and Yisrael Beitenu if they form a minority government supported by the Joint List. It is also important to remember that while the Joint List announced right after the September election that it is not interested in joining a coalition government, it did not rule out supporting one headed by Gantz from the outside in order to put an end to the Netanyahu era and comply with the will of the Arab population, which is fed up with the incitement and division sowed by the Likud under Netanyahu.

“Liberman wants to send Netanyahu home. That is the same goal we have in the Arab sector,” former minister Raleb Majadele (Labor) told Al-Monitor. “We want to send Netanyahu home, so we have no problem with the Joint List supporting a minority government in exchange for a series of civic demands to improve the situation of Israel’s Arab population.”

The minority government with the best chance of being formed would include Blue and White (33 seats), Labor-Gesher (6) and the Democratic Camp (5). With 44 seats, such a government would meet the needs of the two players without which it has no chance of being formed, the Joint List and Yisrael Beitenu. It is important for these parties' constituencies that they do not appear to have cooperated or even voted together to form the next government. A government of 44 seats will allow them to do so. Liberman and the other members of his party could absent themselves from the confidence vote, and the members of the Joint List could vote in support despite reservations expressed by the Balad faction. When the moment of truth arrives, they will likely be subjected to protests from the Arab street. Under these circumstances, such a government will have 57 Knesset members voting in support, as compared to Netanyahu’s bloc of 55.

“When push comes to shove, the Arab society and its leadership must decide what is best for them. Right now, what is best for them is an end to the Netanyahu government. I believe that when the moment of truth arrives, they will make the right decision. If the cost is being on the same side as Liberman, then yes — as long as Liberman is the one to suffer from it, and not the Arab sector. It may not be the ideal situation, but we have to try to get the best out of what we have,” said Haaretz writer Odeh Bisharat in a conversation with Al-Monitor.

“It is a pragmatic step forward, given the circumstances we live in,” Maha Karkabi-Sabah told Al-Monitor. The researcher and lecturer in sociology at the Tel Aviv-Jaffa Academic College and Haifa University went on, “This is a chance to finally have a say, after years of exclusion and delegitimization, even if there is no reason to expect that it would lead to significant change in the country’s attitude to its Arab population or the status of Arabs in Israeli politics.”

Now, after all of this, the latest round of violence that erupted between Israel and Gaza Tuesday morning looks like it is about to reshuffle the political cards.