With Prime Minister Benjamin Netanyahu unable to form a government with his right-wing allies, he and his associates hope to prevent others from succeeding at the task by launching a new line of attack inciting against the Arab parties and branding those who cooperate with them as security threats. 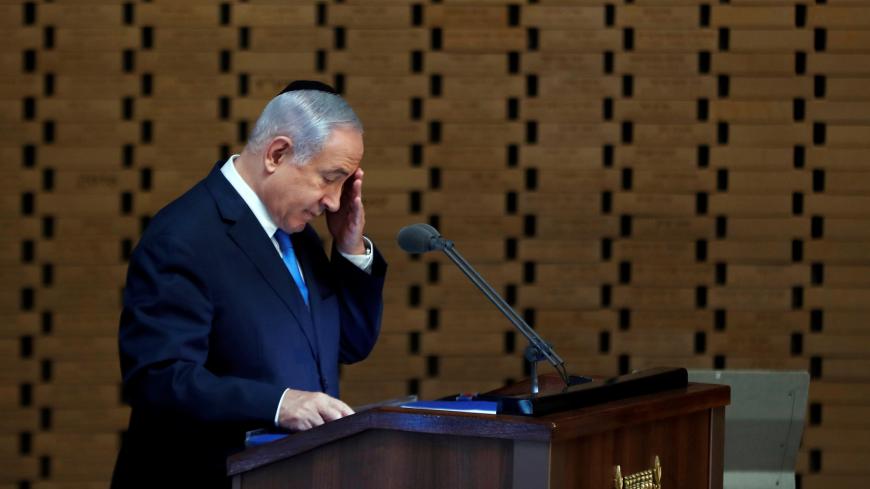 Yes, Israeli Prime Minister Benjamin Netanyahu is trying to prevent Blue and White leader Benny Gantz from forming a new government. Still, there is no real value to the letters of commitment that Netanyahu has gotten his partners in the ultra-Orthodox parties and on the right to sign. The effort is futile. Under the right circumstances, any potential coalition partner can choose to ignore such a document after signing it, citing the need to follow a ruling by their movements or the dictates of the rabbis. Thus it makes no sense that most of the partners in Netanyahu’s bloc responded so positively to his demand for absolute loyalty. Surely they must have noticed that for the second time in half a year, their leader can’t form a government.

The document that Netanyahu’s “natural partners” — Shas, Yahadut HaTorah and HaBayit HaYehudi–National Union — were coaxed to sign Oct. 16 is disturbing. The agreement reads, “If, God forbid, a minority government is sworn in with the support of the Joint List, either from outside the coalition or as a part of it, we will not join the government at any stage, we will vote against it in every vote, and we will do everything we can to topple it.” Naftali Bennett and Ayelet Shaked of the New Right declined to sign the agreement. It is especially worth noting the formula used to appeal to the ultra-Orthodox parties. The expression “God forbid” in this context is reserved for natural disasters or other cataclysmic events, which man alone cannot prevent.

As if that were not enough, Knesset member Miki Zohar (Likud), Netanyahu emissary and henchman who led the initiative to dissolve the 21st Knesset on the prime minister's behalf, added clarity to the situation, tweeting a suggestion that treated the mandate to govern as if it were some kind of personal object belonging to Netanyahu: “I call on the prime minister, do not return your mandate to form a government to the president until [Yisrael Beitenu leader] Liberman announces that he will not allow [Blue and White leaders] Gantz and [Yair] Lapid to form a minority government with the support of the [Arab] Joint List. If, God forbid that does happen [i.e., such a government is formed], the people who form that government will be exposed to extortion on security affairs by the Joint List. This puts all of our safety at risk, without even knowing what the Iranians learned by tapping Gantz’s phone.”

In other words, Zohar asserts that anyone who cooperates with Arab Knesset members is prone to extortion by them, thereby becoming security threats to the State of Israel. In short, a person cooperating could essentially be considered a traitor. Netanyahu and his Likud associates have a long history of inciting against Israeli Arabs in general and Arab Knesset members in particular. This time, however, it looks like his breaking point is a lot more brittle. Unable to form a government, he is prepared to cross every red line imaginable.

Joining in the incitement is Naftali Bennett, a senior member of Yamina. He desperately wants to rehabilitate his career after multiple misreadings of the political map. Now he is warning his supporters of a “dark exercise” to form a minority government. According to him, a minority government that relies on the support of the 13 members of the Joint List is an “immoral idea.” Bennett has been aiming his attack at the Blue and White's chairman, Gantz, a former military chief of staff, and against Yisrael Beitenu's chairman, Liberman, warning them that they will bear a mark of shame if they allow themselves to be seduced into forming such a government.

Knesset member Ahmad Tibi (Joint List) told Al-Monitor that he is not surprised by the continued delegitimization of his party by the right or by the way Zohar is ramping up the rhetoric. What does surprise him is that ultra-Orthodox Yahadut HaTorah members agreed to sign Netanyahu’s commitment document in the first place.

“I called Knesset member [Moshe] Gafni,” Tibi stated. “I said to him that I was surprised to see that they had signed.” Tibi went on to say that Gafni had acknowledged that their signatures were superfluous and that in the future, they would pay closer attention to wording that could be deemed inappropriate.

“Netanyahu will do everything he can to obtain immunity and avoid prison,” Tibi remarked. “At this point, he is unable to form a government, so he is turning to incitement and the delegitimization of the Arab society.”

Tibi is infuriated by the idea that Netanyahu thinks the very notion of the Joint List supporting a potential government formed by Gantz poses an existential threat to the State of Israel, while it is legitimate to have an extremist Knesset member like Zohar in a coalition. “Miki Zohar is a right-wing extremist who has incited against the [Arab] sector frequently and also someone who has spoken about the Jewish race as being special,” said Tibi. In a radio interview in June 2018, Zohar had said, “The public in Israel is a public that belongs to the Jewish race, and the entire Jewish race is the highest [in] human capital, the smartest, the most comprehending.”

Meanwhile, the clock is ticking, and the mandate to form a new government that President Reuven Rivlin gave to Netanyahu expires Oct. 23. Netanyahu has no possible path to a government with his right-wing bloc regardless of how many bizarre letters of commitment its members are prepared to sign. He also can't form a government with Liberman, who is standing as firm as a towering wall and shows no signs of a willingness to compromise.

On Oct. 17, Netanyahu called Gantz to suggest an “outline for compromise” so they can form a unity government. Gantz rejected the idea at once and tweeted, “We will wait to receive the mandate from the president and begin serious negotiations to form a liberal unity government.” In other words, he wants to form a government without the right-wing and ultra-Orthodox bloc that has been sticking with Netanyahu.

The chances of Gantz forming a minority government with the outside support of the Joint List are meager at best. As Tibi put it, “No one has offered us anything yet, but if they do, we will discuss it in depth.” A more realistic scenario is that Israel will have a third round of elections in less than a year, and Netanyahu will continue to fight for his political survival every way he can, no holds barred.

Since utterances like “Arabs are heading to the polls in droves,” made on election day in 2015, and “election theft,” alleged during the April 2019 elections, are tired clichés by now, it looks like Netanyahu's new approach will be to try to scare Jewish voters with tales of “extortion” by the Arab parties on security matters. For this to be sufficiently intimidating, and therefore effective, Netanyahu’s associates are likely already hard at work looking for “incriminating” material on Israel’s Arab Knesset members.