Why Liberman ends alliance with ultra-Orthodox

After he prevented the formation of a right, ultra-Orthodox government following the April and September elections, Yisrael Beitenu leader Avigdor Liberman has sharpened his statements toward the ultra-Orthodox. 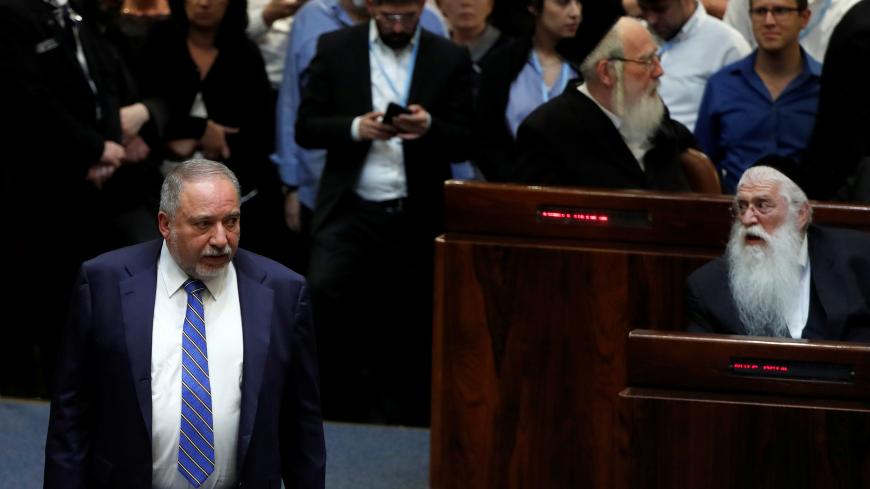 Moments after he ended his press conference at the Knesset Nov. 20, in which he railed against the ultra-Orthodox parties, Yisrael Beitenu leader Avigdor Liberman strode from the faction’s room to his office, smiling ear to ear. “So, are all the ultra-Orthodox already uniting against me?” he asked me defiantly. This statement points to the change in his strategic political direction in the last year. After he chose to go all the way on the issue of religion and state that was the cause for the April election, and prevented the formation of a right-ultra-Orthodox government after that election as well as after the September election, Liberman continues to harden his tone toward the ultra-Orthodox.

His press conference angered many, when he tied the ultra-Orthodox parties (Shas and Yahadut HaTorah) with the Joint List, which represents Israeli Arabs. "This is an anti-Zionist coalition that plays between the two blocs,” he said. “We should say it as it is — the Joint List is really a fifth column. But unfortunately, the Haredi [ultra-Orthodox] parties are also becoming more and more anti-Zionist.”

Later, he spoke about yeshiva students and said that 150,000 study in yeshivas instead of working. In his view, there is no need for more than 1,500 students for whom the Torah is their trade, and all the rest should work. “Studying the Torah is a blessing but they should do it on their own dime. We can’t bring up a generation of needy unfortunates here,” he argued.

The expression “anti-Zionist” and the connection to the Arab Knesset members was one step too far for the ultra-Orthodox Knesset members, and shortly after Liberman stopped speaking, Yahadut HaTorah called an urgent meeting. “A shameful and ugly horror show … full of ignorance and hatred,” Deputy Minister of Health Yaakov Litzman characterized Liberman’s speech. “Anti-Semitism has been rediscovered today.” His colleague Knesset member Moshe Gafni added, “Liberman must leave the political establishment. We don’t recall such anti-Semitism in the Israeli Knesset … in another country this man would go to jail. Does this corrupt man know what we do? Who are you? Zero.”

Interior Minister Aryeh Deri of Shas did not spare Liberman a tongue lashing, although he was moderate in his speech compared to Litzman and Gafni — perhaps because of his past association with Liberman. At a meeting of the right-wing bloc in the Knesset he accused Liberman of purposely preventing the formation of a unity government and compared him to a cat meowing for attention. “Liberman will pay the price for his actions. The public isn’t stupid. A good unity government will be created here without [senior Blue and White Yair] Lapid and without Liberman like the public wants and expects,” Deri said. The fact that Liberman and Deri were once close friends who knew how to join forces for political ends, despite the ideological differences between them had been totally forgotten. (For instance, in the municipal election in Jerusalem a year ago both of them sponsored winning candidate Moshe Leon).

In conversation with Al-Monitor, Gafni said that Liberman — understanding that his party has nothing unique about it unlike other right-wing parties and fearing that he wouldn’t pass the vote threshold in a next election round — “decided to go on the safe path of 'hit the ultra-Orthodox' and won popularity. Liberman betrayed the right-wing bloc to which he belongs,” he said, “in order to get better press and remain politically relevant.”

In his remarks, Litzman recalled that Liberman had no qualms about close connections with the ultra-Orthodox in the past. “Before he smears the ultra-Orthodox as acting against the state, he should reflect with himself on how he cooperated with us over the years, got budgets through with us, begged for our votes and sent representatives to our rabbis,” Litzman said.

The political significance of all this is that in his statements Liberman closed the door conclusively on the ultra-Orthodox, that is, chances of him rejoining the right-ultra-Orthodox bloc and the formation of a right-ultra-Orthodox government are rather slim. In the current balance of power in the Knesset there would be no such coalition without his votes.

At that same meeting of the right-wing bloc, it was actually the chairman of the coalition, Knesset member Miki Zohar (Likud), who defended Liberman. When Minister Bezalel Smotrich of HaBayit HaYehudi-National Union sharply attacked Liberman and called him a “serial scoundrel, cynic and a user, for whom the good of the state is of no value,” Zohar was the one who stopped him and asked him to be more professional and stately and less belligerent. Surprisingly, Prime Minister Benjamin Netanyahu joined him and said that “none of the public should be rejected out of hand, not the ultra-Orthodox, nor Arabs, and I suggest not to reject [Liberman]. Even though we have political differences.” Netanyahu even thanked Liberman at the start of his remarks for rejecting the idea of a [Gantz-led] minority government with the Arab Joint List.

What’s the meaning of this defense? One possibility is that Netanyahu still holds hope of succeeding to form a government with Liberman in the days remaining until the disbanding of the Knesset on Dec. 11 at midnight. A second possibility is Netanyahu’s hope for Liberman’s support in his request for immunity, when and if it is submitted. In the current balance of power, if a Knesset committee is formed to discuss immunity, Liberman would be the deciding vote to grant Netanyahu immunity. After the attorney general announced that he intends to indict Netanyahu, Liberman tweeted Nov. 21, "We must let the legal system do its work and let the prime minister have his day in court to prove his innocence." This response to the decision to indict Netanyahu actually hints that Liberman doesn’t lean toward supporting immunity for the prime minister.

And after all this, we could say that the rift created between the ultra-Orthodox and Liberman further reduces the chances for the formation of a government that would include both, and increases the chances for a third election.