A report on ultra-Orthodox exemptions from military service while top politician Avigdor Liberman served as defense minister has raised serious questions about his campaign to increase their enlistment. 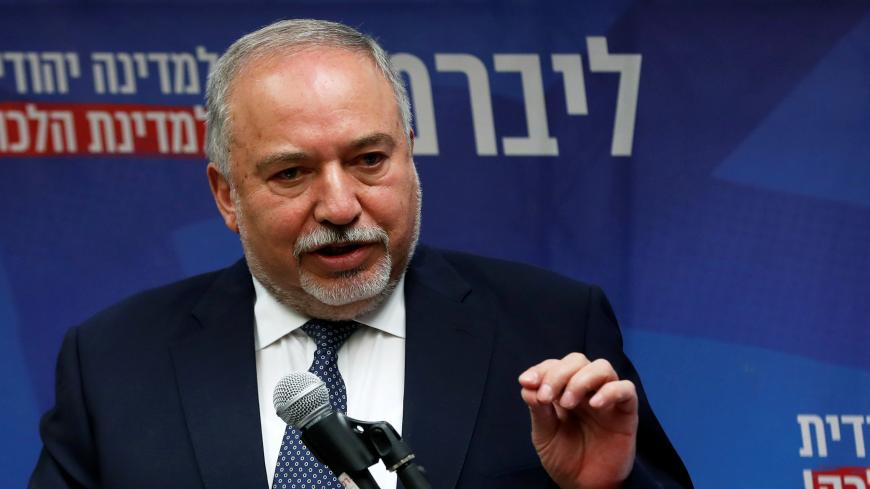 Avigdor Liberman, head of the ultranationalist Yisrael Beitenu Party, delivers a statement at the Knesset in Jerusalem, Nov. 20, 2019. - REUTERS/Ronen Zvulun

Avigdor Liberman and his Yisrael Beitenu party have been key players over the past year in Israel’s chaotic political arena, holding the swing votes that will determine which of the two major political blocs forms Israel’s next government. Liberman’s November 2018 resignation as defense minister led to early elections in April 2019, after which he surprised everyone by refusing to join the government of right-wing and ultra-Orthodox parties that Prime Minister Benjamin Netanyahu sought to form. His refusal, he explained, stemmed from his agenda that espouses separation of religion from the affairs of state and his persistent demand that ultra-Orthodox men perform mandatory military service like all other young Israelis.

Liberman stuck to his guns after the September 2019 elections as well, and escalated his campaign against the ultra-Orthodox over their rejection of his core demands. “Unfortunately, the ultra-Orthodox parties are also increasingly anti-Zionist,” he claimed in a fiery November 2019 speech.

The responses of ultra-Orthodox Knesset members to these accusations were equally harsh. “Liberman should leave politics. We do not recall such anti-Semitism in the Knesset," ultra-Orthodox lawmaker Moshe Gafni lashed out. The Yahadut HaTorah member went on, "In any other state, the man would have gone to jail. Does this corrupt man even know what we do? Who are you? A nothing.” Interior Minister Aryeh Deri, chair of the ultra-Orthodox Shas, warned that Liberman would pay for his actions.

A Feb. 3 exposé by Haaretz revealed Liberman’s heavy involvement in obtaining draft exemptions for ultra-Orthodox men in his capacity as defense minister. It paints the harsh clash and venomous public accusations between Liberman and the ultra-Orthodox in an absurd light and could undermine the credibility of the campaign Liberman is conducting ahead of the March 2 elections, Israel’s third in less than a year.

According to the Haaretz report by ultra-Orthodox journalist Aaron Rabinowitz, Liberman’s term in the Defense Ministry from May 2016 to November 2018 was a “golden age” for well-connected ultra-Orthodox men who did not want to enlist. Documents and testimony presented in the piece indicate that ultra-Orthodox Knesset members enjoyed unfettered access to Liberman and used it to obtain draft exemptions, deferments or lenient service conditions for hundreds of members of their communities.

The list of Knesset members whose offices were in regular touch with Liberman’s shows that the appeals came from all over the ultra-Orthodox community. Among them were Health Minister Yaakov Litzman of the Hassidic Gur sect, Budget Committee chair Gafni of the non-Hassidic Lithuanian stream, Knesset member Yoav Ben-Tsur of the Sephardic Shas party and Knesset member Uri Maklev of Yahadut HaTorah, who dubbed Liberman “the head of a criminal party” the day before the exposé ran. The report also revealed that Liberman’s adviser on ultra-Orthodox matters, Avi Abuhatzera, helped the son of a prominent ultra-Orthodox politician who had submitted forged documents to the army. Following his intervention, the son received a medical exemption from the draft.

There are other contradictions between Liberman’s declarations and actions. According to Haaretz, draft exemptions were granted to hundreds of members of the radical anti-Zionist Jerusalem Faction, a group that deeply opposes compromise on the draft and has held numerous, sometimes violent demonstrations on the issue. Members of the sect who dodged the draft or failed to show up at the recruitment center to seek a deferral on grounds that they were engaged in yeshiva studies were sent exemptions in the mail without explanation, according to the report. Liberman’s adviser Abuhatzera asked the ultra-Orthodox to avoid stirring up unrest among their followers, explaining that he has lists of young men who were about to receive exemptions. “The minister’s declared policy was completely opposite to what was being done, in fact,” a senior army official was quoted as saying.

Still, on the day the story ran, members of the Jerusalem Faction once again demonstrated against ultra-Orthodox conscription and blocked roads. Liberman’s angry response was paradoxical. The authorities "must put a stop to the bullying by the dodgers and the Jerusalem Faction. The law enforcement system must take action against these rioters,” he tweeted. "They cannot block roads and disrupt people’s lives whenever they feel like it. Yisrael Beitenu will work to enact mandatory draft legislation or national community service."

Liberman then moved the attack to Facebook. “For me, anyone who serves in the Israel Defense Forces, performs reserve duty, works and pays taxes is more Jewish than Deri and Litzman together, who are busy every day extorting funds from the public coffers at our expense,” he wrote.

Liberman’s office has strenuously denied the Haaretz report, saying that as defense minister, he never intervened in any draft exemption, not even tacitly, and that requests from the ultra-Orthodox on such issues were treated the same as requests from other Israelis.

However, the Haaretz data shows that the number of exemptions granted to ultra-Orthodox men on “special” grounds — i.e. not for reasons of ill health or a criminal record — greatly increased during Liberman’s tenure. In 2018, the Defense Ministry issued three times the number of exemptions it had the previous year. After Liberman stepped down, the numbers reverted to the level recorded prior to his term.

Liberman also said the Haaretz piece was designed to undermine his party’s election campaign, which had exposed “the ultra-Orthodox parties’ takeover of the state budget.” Yisrael Beitenu fears that its agenda of separating religion from state affairs is not sufficiently popular with voters in the current campaign, having been replaced by issues that Netanyahu skillfully timed for this period or by the issue of Netanyahu’s corruption indictment. For now, the ultra-Orthodox parties are responding to Liberman’s provocations in a measured fashion.

Following the Haaretz write-up, the center-left Labor-Gesher-Meretz alliance claimed Liberman was “deceiving his voters” and demanded that the Knesset’s Foreign Affairs and Defense Committee convene to discuss the revelations. Nonetheless, the latest polls indicate that even if Liberman’s party is weakened in the March 2 elections and drops from its current eight to six Knesset seats, neither the Likud bloc nor the Blue and White one will win sufficient votes to form a government without him.