Prime Minister Benjamin Netanyahu is pushing for mergers between small parties, including the ultra-Orthodox parties, to prevent a loss of votes for the right-wing bloc. 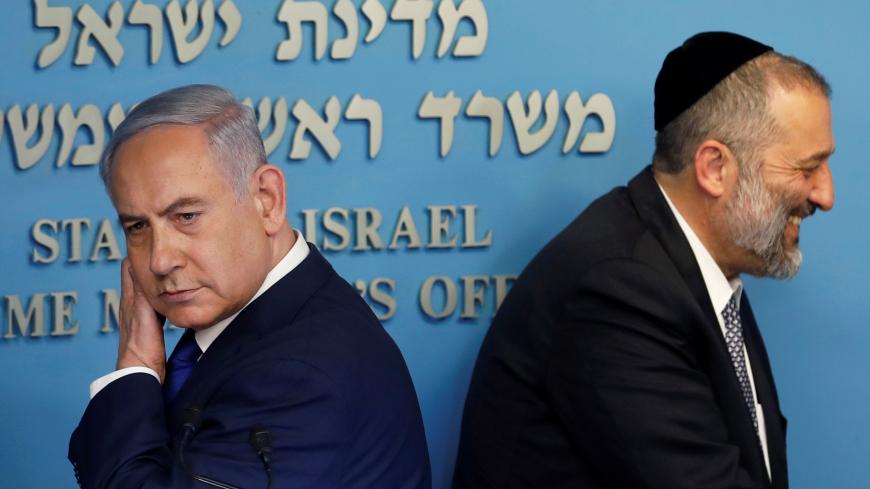 Israeli Prime Minister Benjamin Netanyahu and Israeli Interior Minister Aryeh Deri are seen at the end of a news conference at the prime minister's office in Jerusalem, April 2, 2018. - REUTERS/Ronen Zvulun

Prime Minister Benjamin Netanyahu’s advisers have no doubt that, in the end, Israel Resilience, the party of Benny Gantz, the new star of Israeli politics and main rival of Netanyahu, will merge with Yair Lapid’s Yesh Atid. Netanyahu is concerned that such a joint list would get more mandates than the Likud. A Channel 12 poll, for instance, gives a Gantz-Lapid union 35 mandates compared to 30 for Netanyahu and the Likud.

Netanyahu fears that if the Likud isn't the largest party in the Knesset, President Reuven Rivlin, with whom he doesn’t get along, will charge Gantz with trying to form a government. Thus, Netanyahu is acting on two fronts. On one, he seeks to create a Likud-right-wing bloc that would run in a joint list and ensure its place as the largest party. To do so, Netanyahu asked Likud members to reserve three places on the list for him, and not just the one he’s already reserved. Like that, he will be able to plug in three candidates of his choice without needing the party institutions’ approval.

The move was meant to offer a solution to small right-wing parties that might have difficulties overcoming the vote threshold, like Avigdor Liberman’s Yisrael Beitenu, which found itself in such a situation in 2009, or the religious Zionist party HaBayit HaYehudi. Liberman doesn’t reject such a possibility, but he unrelentingly attacks Netanyahu for failing to implement right-wing policies. HaBayit HaYehudi announced that such a possibility won’t be considered. The party’s CEO, Nir Urbach, told Al-Monitor, “We’re not an offshoot of the Likud and we’ll be a strong and impressive party.” However, it’s likely that both parties would respond to the Likud’s offer if polls leading up to the election show that they’re on the brink of the vote threshold.

Netanyahu and his advisers are also trying to encourage a union between the right wing and the ultra-Orthodox parties in order to prevent a waste of votes on parties that won’t pass the vote threshold. Netanyahu fears that, according to his advisers’ estimates and analysis, his primary campaign message about his persecution by the elites in the media and the police, and the justice system’s obsession to convict him, could draw many votes away from the small right-wing parties and thus endanger them.

Speaking with political sources, Al-Monitor learned that in a telephone conversation over the weekend between the prime minister and chairman of Mizrahi ultra-Orthodox Shas, Aryeh Deri, Netanyahu asked where the union between the other (Ashkenazi) ultra-Orthodox parties is stuck and how he could help. Deri answered that the party's not really sure if a union is indeed necessary, since he thinks Shas could reach 6-7 mandates, according to internal polls and the results of the local elections where it had rather good success. Secondly, he said, there’s internal opposition in the Shas movement to such alliances that could erase the Mizrahi ultra-Orthodox party’s uniqueness and conflict with the intentions of the movement’s founder, Rabbi Ovadia Yosef. The two most experienced and senior politicians of Israeli politics (Netanyahu and Deri) examined various scenarios, and Netanyahu warned that if Shas falls under the vote threshold, Gantz and the left wing would be charged with forming the next government.

Netanyahu and his people, including his Chief of Staff Yoav Horowitz, held similar conversations with Yaakov Litzman and Moshe Gafni, the leaders of the two factions that compose Ashkenazi ultra-Orthodox party, Yahadut HaTorah. Litzman is a big fan of the idea, while Gafni is not thrilled but won’t oppose the unification move. In any case Deri, Litzman and Gafni gave Netanyahu a similar answer, saying that they’ll consult their rabbis, who will direct them. In Litzman’s Agudat Yisrael faction, the rabbis support such a move; in Gafni’s Degel HaTorah faction, they haven’t decided yet, and in Shas, as noted, there’s opposition, but if Deri wants it, the opposition will surely give in.

Netanyahu had a similar phone conversation with Bezalel Smotrich, chairman of Ichud Leumi (the National Union), the party representing the more hawkish side of religious Zionism. Netanyahu encouraged him to advance a possible alliance with the more moderate HaBayit HaYehudi party and also with far-right Otzma Yehudit (Jewish Power) — the party of nationalist activist Rabbi Meir Kahane’s successors. At the same time, Netanyahu is pushing for unity in this framework with Eli Yishai, head of ultra-Orthodox Yachad party, which broke off from Deri’s Shas a few years ago.

But while these contacts go on, Smotrich, who takes a nationalist, critical approach rather than a stately, or more mainstream, one toward the Israel Defense Forces, the police and security forces, continues to express his opinions. This week, on Jan. 31, he demanded that several soldiers accused of striking Palestinians be released from detention.

Leaders of center and left-wing parties, including Yesh Atid leader Yair Lapid, criticized Netanyahu’s willingness to advance extremist right-wing parties, as some of them espouse racist platforms. But Netanyahu sees only the need to prevent a loss of votes for the right. Journalist Shimon Riklin, one of Netanyahu’s associates, responded to these allegations and said that the left is not ashamed to depend on the Arab parties, some of whose members (allegedly) argue against the existence of the State of Israel and aid terrorists, and thus they have no ground to rebuke Netanyahu.

The problem of the vote threshold exists on the left as well. Thus, the Meretz party, according to polls, teeters at the 4-5 mandate cliff, perhaps because of a loss of votes to Gantz’s party, who seems to be the only person able to defeat Netanyahu and the Likud. Journalists and public figures are pushing for a Meretz alliance with the Labor Party, so that the Meretz party won’t be erased. Chairwoman of Meretz, Tamar Zandberg, has appealed to Labor Party members in such a spirit. Senior Labor member Shelly Yachimovich supports this move, but Chairman Avi Gabbay is not thrilled, saying that there’s significant gaps between the two parties and that a merger won’t help change the government. His associates say his stance is firm and that a union is unlikely.

The four Arab parties that ran in the Joint List alliance in the last 2015 election have broken up since the resignation of Knesset member Ahmad Tibi and the formation of his Ta’al Party. Two of them might run on one ticket, yet nothing has been decided. Tibi told Al-Monitor that he won’t respond to efforts to return him to the Joint List and that he has polls that show he would receive at least six mandates if he runs independently at the head of Ta’al.

Opinions are split on this. Shlomi Eldar wrote recently for Al-Monitor that Tibi refused tempting offers to return to the Joint List, and that several Joint List seniors would actually be happy to hand him over Ra’am — the party representing the Islamic Movement in Israel. Ra’am has presented a set of demands vis-a-vis Hadash party Chairman Ayman Odeh, who also serves as head of the Joint List; demands that he would rather not accept. A senior Arab Israeli politician confirmed to Al-Monitor that efforts are indeed being made to convince Tibi to join forces with Ra’am. Tibi has good connections with the heads of this party, and over the weekend, on Feb. 2, he even traveled with them to visit Turkish President Recep Tayyip Erdogan.

In the end, some of the mergers would probably take place both on the right and on the left. These decisions will be made according to polls in the third week of February, before the last date to submit candidate lists for the Knesset on Feb. 21.