Netanyahu rivals bet everything on Blue and White

The brand-new alliance between Israel Resilience head Benny Gantz and Yesh Atid leader Yair Lapid has shaken up Israeli politics just ahead of the April elections. 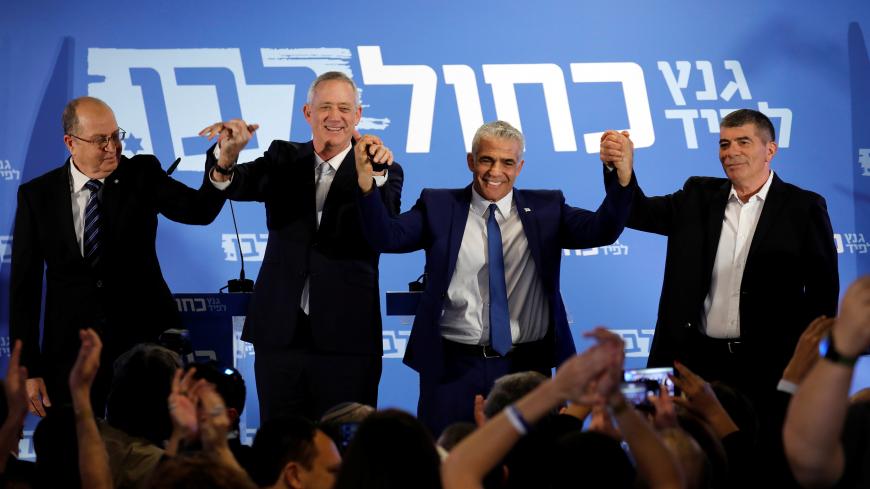 The merger of Israel Resilience and Yesh Atid into one slate ahead of the next elections had immediate and dramatic effects. The Blue and White party, born after a very brief gestation Feb. 21 at the home of businessman Hillel Kobrinsky, has made the biggest bang in Israeli politics since the late Ariel Sharon formed Kadima in 2005.

Within hours, the polls showed the new platform as Israel’s biggest party, overtaking the ruling Likud and dealing a blow to the barely recuperating Labor and to Finance Minister Moshe Kahlon's Kulanu, which is at risk of electoral oblivion.

In the morning hours of Feb. 21, Prime Minister Benjamin Netanyahu was still heading with confidence for a fifth term as prime minister. By evening, he found himself in a tight spot. Blue and White had reshuffled all the cards. Everything was up for grabs.

The surprising decision for a joint run by Israel Resilience chair Benny Gantz and Yesh Atid's Yair Lapid will be tested on April 9 at the ballot box. There will be no middle ground. Once the votes are counted, the partnership will either be a historic transformation of Israeli politics or a colossal flop. If they do not unseat Netanyahu, Blue and White will be nothing more than a footnote.

On the other hand, Gantz, who under a term-sharing agreement will be first in the prime minister’s office, now has a real opportunity to defeat Netanyahu, a scenario that was not truly feasible before.

There is more to this political storm. Another former army chief joined Gantz and Lapid at the last minute: the popular Gabi Ashkenazi, considered a potential draw for moderate right-wing voters. He will be key to their success, as they must shift support from the right-wing political bloc. So far, judging by the polls, this shift is not yet happening.

What sparked all this drama? Likely the distress of its two authors, who realized they were no match for Netanyahu on their own. Gantz started out high in the polls when he first announced his candidacy late last year, but the loss of that initial momentum in recent weeks was of great concern. Lapid, on the other hand, managed to recoup some electoral support that had shifted over to Gantz in the polls, but he too realized the elections were a lost cause for him alone. The union had been in the cards for many weeks but was very iffy until this week.

The Gantz-Lapid party has one clear goal, bringing down Netanyahu, and it's already drawing a large following. The latest polls give them 36 seats and Netanyahu’s party 30, with some polls giving the Likud even less.

Four men stood at the podium at the unveiling of the new Blue and White Knesset list in a calculated show of strength: Gantz, Lapid, Ashkenazi and also Moshe Ya’alon, who had joined Gantz earlier in the race. Gantz, Ashkenazi and Ya’alon all served as Israel’s top soldiers. Gantz and Ashkenazi served under Netanyahu, and Ya’alon served as Netanyahu’s defense minister. The photo is tremendously powerful, both undermining Netanyahu's image as Mr. Security and offering a strong, united team of fresh yet experienced politicians.

Netanyahu must have instantly recognized the potential threat of three former military chiefs-of-staff sharing a stage. In a speech responding to the newly unveiled party, he directed all his fire at the fourth member of the group, Lapid, who served as a reporter for the army’s Bamahane newspaper during his military service. According to the Blue and White rotation agreement with Gantz, Lapid would replace Gantz as prime minister after two and a half years.

Over the past three weeks, Netanyahu has worked intensely to unite the splinter parties on the radical right so that they would run on one slate. Had they not united, they would likely not have collected sufficient votes to get into the next Knesset and the votes cast in their favor would have been lost, weakening Netanyahu’s right-wing bloc.

Netanyahu accomplished his mission, effectively legitimizing the disciples of militant nationalist Meir Kahane, the Otzma Yehudit (Jewish Power) party. Netanyahu thus ensured the election of people on the radical right margins who espouse a racist, anti-Arab platform. Many on the right found this cooperation hard to swallow, but Netanyahu was impervious to criticism. The alliance gave him what he needed most, a political safety net. After analyzing poll results, he concluded that even if his deal with the radical right drives away some voters, it will win him other vital votes that would otherwise be lost.

Still, two other parties, Kulanu and Yisrael Beitenu, considered natural allies of Netanyahu, may not reach the vote threshold.

On Thursday, a few hours before the deadline for submitting the electoral lists, there were attempts to unite Kulanu and the Likud. But unlike Netanyahu's efforts to unite the radical right, there was very little energy invested. Kulanu head Moshe Kahlon told his associates that the party would probably pass the four-mandate threshold, but he is emerging as the tragic hero of these elections, his supporters dispersed amid the new center parties.

Yisrael Beitenu head Avigdor Liberman is in a better position and might pass the threshold. He has a core of supporters that should guarantee it — mostly Russian immigrants who consider the party their longtime political home. When the time comes, Liberman won’t have much choice but to recommend Netanyahu to the president for composing the next government. If Gantz gets any support from Arab parties, Liberman surely will not support him.

Kahlon is now the worst off. He is now sticking close to the Likud and Netanyahu, hoping to be recognized as the “sane right” and pick up votes of those reluctant to vote for Netanyahu. The chair of the ultra-Orthodox Shas, Aryeh Deri, has adopted similar tactics, adding Netanyahu’s nickname “Bibi” to his campaign poster. But while Shas is a known factor, Kahlon is not. Netanyahu must suspect that when it comes down to it, Kahlon will break ranks with the right and recommend that Gantz be tasked with forming the next government coalition. Netanyahu likely surmises that Kahlon's failure to cross the electoral threshold would not damage the Likud. He might also call on former Likud voters who shifted over to Kahlon to come home again.

The election will be a cruel and tough battle, not only between Gantz and Netanyahu, but also for Kahlon and Liberman — two veteran politicians whose parties could soon vanish.