For the first time in years, Prime Minister Benjamin Netanyahu is confronted with polls that place his Likud party second and not first. 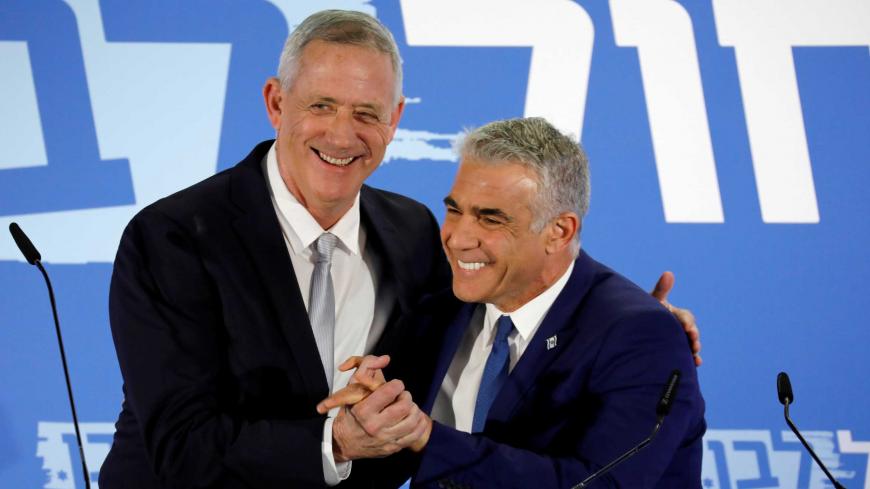 Benny Gantz (L), head of the Resilience Party, and Yair Lapid, head of Yesh Atid, hold a news conference to announce the formation of their joint party following an alliance between their parties, in Tel Aviv, Israel, Feb. 21, 2019. - REUTERS/Amir Cohen

Since the end of Israel's second war in Lebanon in 2006, Prime Minister Benjamin Netanyahu has never experienced such a clear deficit in Israeli public opinion polls against any rival. This week, on Feb. 21, it happened with the establishment of the Blue and White Party. The new political platform of chiefs of staff — led by three reserve lieutenant generals (Benny Gantz, Moshe Ya’alon and Gabi Ashkenazi) plus one television presenter (Yesh Atid leader Yair Lapid) — has taken the public opinion polls by storm and opened a 3-10 mandate lead over Netanyahu.

For the first time since he returned to power in 2009, Benjamin Netanyahu finds himself facing a rival of his own weight. A last-minute scaremongering campaign against the Arab enemy and the terrible security dangers like Netanyahu waged in the last week of the 2015 campaign won’t work this time. On the last election day in March 2015, Netanyahu warned voters that the Arabs were ‘’coming in droves’’ to the polls. This time things are different. If the prime minister says “The Arabs are coming,” he won’t find the lightweight Isaac Herzog and Tzipi Livni (who headed the Zionist Camp in 2015) facing him, but three heavyweight rivals and decorated, experienced generals: the 20th chief of staff, Gantz; the 17th chief of staff, Ya’alon; and the 19th chief of staff, Ashkenazi. And so, the average Israeli voter (who votes at the end of the day for a “sense of security”) could also find it among the camp opposing Netanyahu. The prime minister has lost his greatest asset, which is none other than the weapon of scaremongering — the indefatigable mandate engine that he has developed over the past decade. Barring a dramatic change at the last minute, this new game will end in a photo finish.

For more than a year, the political system in Israel — along with the public and the media — has been talking about the possibility of a big alliance in the center-left camp. The chances for pulling it off have been thought to be slim. Yair Lapid, who built an efficient party and enjoys a base of at least 10 solid mandates, was not willing to hear about the possibility of giving up the top spot and handing over the political mechanism he built to someone else. Moshe Ya’alon (at the head of his own Telem Party) tried to build political power with legwork, but the public wasn’t convinced and he remained irrelevant. Benny Gantz was embraced by the polls but had some doubts. The joker was Gabi Ashkenazi, an especially popular chief of staff who was courted by everyone. Ashkenazi, who somehow survived the Harpaz affair, gave all his suitors the same answer: "I have no intention of joining an existing party. I would be willing to join a large political alliance that could make the difference. For such an alliance, I’d do anything, with no ego and no conditions."

Despite it all, this is exactly what happened. Ashkenazi was the mediator, the benefactor and the psychologist for the two sides, with Gantz on one side and Lapid on the other. Ya’alon had joined Gantz earlier. All that was left to do was to square the circle and find a formula that could link Lapid’s Yesh Atid and Gantz’s Israel Resilience (which already included Ya’alon’s Telem). And indeed, the dramatic Feb. 20 of this week started with a personal meeting between Lapid and Gantz in the morning and ended Thursday morning after a decisive night when agreements were reached and the alliance was sealed. As aforementioned, the new party is called Blue and White, and it presented itself to the Israeli public that very night. A few hours later, it dominated the polls: 35-36 mandates, a significant gap over Netanyahu (26-30 mandates in polls). Something happened in Israel. “We are a ruling party,” Gantz said, and for the first time this statement doesn’t sound ridiculous coming from someone who isn’t Benjamin Netanyahu.

The new party lacks ideology. It includes clear right-wingers like Moshe Ya’alon, who brought with him Zvi Hauser, formerly Netanyahu’s government secretary (2009-2013), and Yoaz Hendel, formerly Netanyahu’s media adviser. The two of them were ejected from the prime minister’s office because they reported to the attorney general on the details of a harassment incident involving Natan Eshel, who is a favorite of Mrs. Sara Netanyahu. These three support the Nationality Law (anchoring Israel’s Jewish nature) strengthening Israeli settlement in the West Bank, and they aren’t excited by diplomatic negotiations with the Palestinians. With them, Blue and White includes quite a few candidates with center or left-wing positions who seek to fix the Nationality Law and support a two-state solution. They speak of a different leadership, of unity, of virtue, of power, of personal example, of a strong leadership that places the best interests of the state above all else. But Blue and White is a typical supermarket party, a kind of department store that tries to present all possible merchandise, where the glowing sign above the door advertises only one real agenda: replacing Netanyahu.

The coming election will be, therefore, a referendum on Netanyahu: Should he continue to serve despite the investigations and potential indictments, or make way and hand over the keys to someone else. It will be a heated derby between the formidable public that follows Netanyahu and swears by him, and the large public that is sick of him, despises him and sees him as the root of evil in Israel.

What will determine this election isn’t only the result between the Likud and Blue and White, but also which satellite parties of these two blocs won’t manage to pass the vote threshold. Right now, this danger is looming over Meretz on the left, but also over Moshe Kahlon’s Kulanu and Avigdor Liberman’s Yisrael Beitenu. Netanyahu knows that if one of the parties in his right flank stays outside the Knesset, he would lose the right-wing bloc that would enable him to form a government. This is the reason that he cancelled a very important meeting with Russian President Vladimir Putin this week, in order to pressure pro-settler HaBayit HaYehudi and force them to unite with the ultra-extremist and racist right-wing party, the successors of Rabbi Meir Kahane, which calls itself Otzmah LeYisrael (strength to Israel). At one time, Likud leaders refused to recognize Kahane (when elected to the Knesset) and left the Knesset plenum when he spoke before it. Today, the leader of the Likud is mustering all of his power in order to include the heirs of the same Kahane in the Israeli legislature.

Netanyahu knows that he’s fighting not only for the government and his political life, but also for his freedom. If he loses the election and doesn’t form a government, the criminal process conducted against him would accelerate and he would lose the (public-opinion) bullet-proof vest accorded by his status as serving prime minister. This is the reason that on the evening of Feb. 21, after the Blue and White Party’s dramatic press conference, he gave a speech opposing it and launched a dark scaremongering campaign against his new rivals. He looked bad, but he spoke powerfully. For the next 45 days (until election day on April 9), this is the name of the game: scaremongering here, calming there. In any case, in about two weeks Attorney General Avichai Mandelblit will probably announce his decision on indicting Netanyahu. If the prime minister succeeds in surviving this political-criminal adventure, he’ll win eternal life.