Netanyahu’s war against the ex-generals

Prime Minister Benjamin Netanyahu sticks with the same strategy that worked for him in the past: depicting his rival as a "leftist." 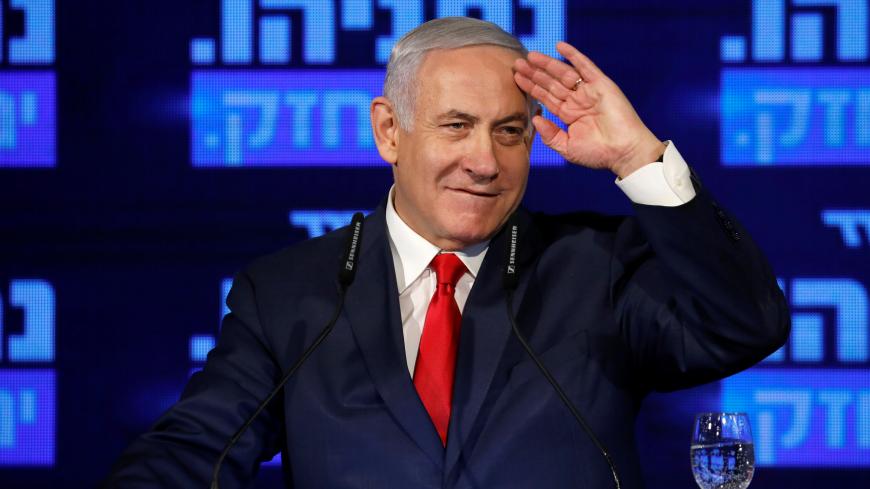 Prime Minister Benjamin Netanyahu has a set strategy when dealing with anyone who dares challenge his leadership: He labels them “leftists.” He did it for the first time in 1996 when he defeated then-Prime Minister Shimon Peres with the unforgettable slogan “Peres will divide Jerusalem.” Since then, all of his rivals are “leftists” — a label that conveys to his right-wing electoral base the sense of danger the "leftists" pose and makes his base run to the nearest polling station to vote for him.

That is why it does not matter who is running against him in the April 9 elections. The very fact that someone is makes that person a radical leftist, as was the case in 2015 with Labor leader Isaac Herzog. These days, Netanyahu’s sophisticated apparatus is busy churning out spins attacking former Chief of Staff Lt. Gen. (res.) Benny Gantz and his political partner Yair Lapid, who together head up the Blue and White party.

Many of Netanyahu adherents do not fact check anything he or his people say about their rivals. These voters would rather see Netanyahu at the helm despite allegations of bribery, fraud and breaches of trust leveled against him. Many of them have bought into his mantra that the media, law enforcement agencies and prosecution are persecuting him and conspiring to unseat him.

After Attorney General Avichai Mandelblit outlined the state’s suspicions against Netanyahu on Feb. 28, the prime minister responded with a harsh attack on the prosecutors handling his cases with accusations of bias. With that behind them, his Likud party has now entered a new campaign phase. From now on, only one message counts: Gantz is a leftist. Netanyahu has mobilized Likud ministers for the cause, meeting with them in recent days and hammering home the message “It’s either Bibi or Tibi” — a reference to his own nickname Bibi and to the popular head of the Arab Ta’al party, Knesset member Ahmad Tibi. The idea is to convince voters — especially moderates on the right displeased with Netanyahu’s corruption allegations — that Gantz’s only option is to form a government with the support of Israel’s Arab parties. On March 3, right after exiting Netanyahu’s office, the ministers stood in front of reporters faithfully reciting “Bibi or Tibi.”

Polls conducted right after Mandelblit issued his decision to indict Netanyahu, pending a hearing, indicate that the Likud is essentially holding its own. That was the good news for Netanyahu. The bad news was that support for Blue and White is growing and the party is maintaining its position as the largest party — polling the equivalent of six to eight Knesset seats ahead of the Likud. Gantz is also neck and neck with Netanyahu on the poll question of which is more suited to be prime minister.

The polls also yielded a particularly worrisome result for Netanyahu: The right-wing bloc of parties could garner the same number of votes as the other parties, with some polls giving a slight advantage to the non-right bloc on which Gantz is relying.

This is an excellent start for Blue and White, although a significant shift of moderate right voters to their side is still missing. In that sense, we are in the midst of one of the most riveting and rocky election campaigns in Israel’s 72-year history. Everything is possible and will likely remain so until election day.

On March 4, one could better understand where all this was heading. Leaders of the Blue and White — Gantz, Lapid and their partners, former chiefs of staff Moshe Ya’alon and Gabi Ashkenazi — set out for a tour of the Golan Heights in a militaristic show of strength by three of the country’s former army chiefs. Their message was clear: Netanyahu cannot claim this group is dangerous and understands nothing about defense matters. After all, he was the one who entrusted Gantz with the Israel Defense Forces when he appointed him chief of staff in 2011.

Gantz came to this tour armed with a statement highlighting Netanyahu’s troubles. He said, “All those who are taking a nosedive in the polls and starting to make things up, that these people will go with Tibi and those people will go with [Otzma Yehudit’s mentor, the extremist Rabbi Meir] Kahane — none of it is true.” Gantz used the scenic backdrop of the Golan to hammer home his message in concrete terms: “Here, in this place, Bogie [Ya’alon] fought, Gabi [Ashkenazi] fought too, and I was also engaged in operations here. … There are three chiefs of staff and a former minister who was in the Cabinet. [One-hundred and seventeen] years of military experience … we will not be taught how to protect the country and how to fight terror … we will never leave the Golan Heights. On the contrary, it will be developed and multiplied.”

With this statement of intent ruling out concessions on the Golan to appeal to right-wing constituents — and a party platform published that same morning that makes no mention of a Palestinian state but pledges to maintain intact Israel’s settlement blocs in the West Bank — Gantz and his party will try to draw voters away from Netanyahu. It remains to be seen whether they succeed.

Netanyahu’s response was not long in coming. That same evening, when the Likud formally launched its campaign at a festive event in the town of Ramat Gan, no one but Netanyahu took the stage. The Likud leadership served as cheerleaders and movie extras. Netanyahu even shook hands with his Likud rival and nemesis Gideon Saar in a highly public show of unity. The apparent bonhomie was intended to show his voters that the entire party was lined up behind him despite the suspicions of bribery against him. If there is one political achievement in the past year of which Netanyahu can boast, it is his ability to mobilize an entire party and get its members to parrot his talking points despite all the police investigations and pending charges. His lengthy speech at the launch event was more of the same: “I say to you, Gantz and Lapid: Don’t be ashamed. You’re leftists. It’s okay to be leftist; just don’t hide it. Stand behind your positions. Let’s help them take their masks off.”

Netanyahu will keep trying to sidestep the accusations and keep labeling Gantz a dangerous liberal. Blue and White, for their part, will try to push Netanyahu into a corner and conduct more defense-oriented field trips. The fate of the satellite parties to the left and right of the Likud in the coming elections is the one major unknown: The Gesher party, led by Knesset member Orly Levy-Abekasis, the center-right Kulanu Party and the left-wing Meretz Party are all polling below the electoral threshold. Failure by any of them to garner sufficient votes to get into the Knesset could change the political map and determine who will be Israel’s next prime minister. It will be a very close call.