Polls indicate that Blue and White leader Benny Gantz is getting closer and closer to toppling Prime Minister Benjamin Netanyahu at the April 9 elections. Can he make it? 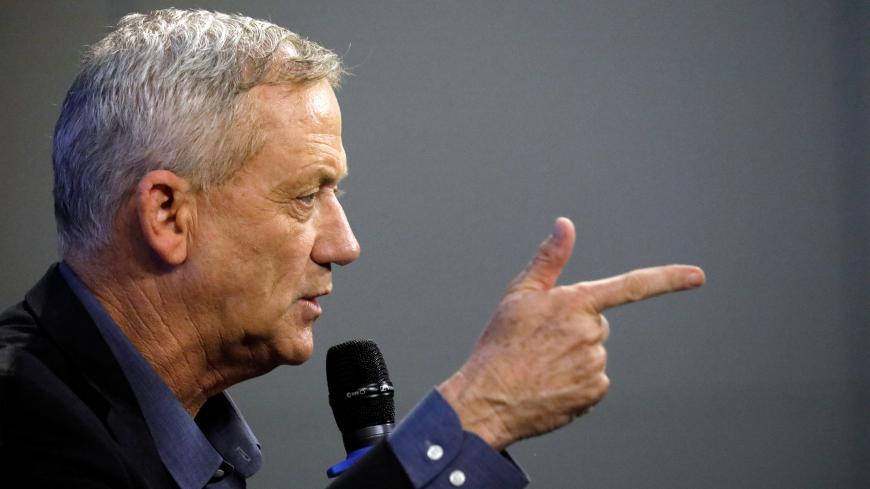 Up to six months ago, no one believed Benny Gantz would come so close to replacing Benjamin Netanyahu as the prime minister of Israel. Many Israelis willing to give a kidney just to see Netanyahu pack his bags and vacate the official residence on Jerusalem’s Balfour Street are now pinning their hopes on this gangly, introverted, shy and soft-spoken officer. Just over four years ago, this seemingly unimpressive man set out to find himself after a lifelong military career that took him to the pinnacle of the Israel Defense Forces (IDF) as chief of staff. In December 2018, the retired lieutenant general formed a political party called the Israel Resilience Party, bringing the entire political establishment to its knees.

Among the many aspiring to Netanyahu’s crown, Gantz became an odds-on favorite to achieve what no one had managed to do over the past decade. With his party overtaking Netanyahu’s Likud, Gantz turned into the great white hope of the anti-Netanyahu camp. There were other wannabes for the title in the past, such as head of the centrist Yesh Atid party Yair Lapid, head of the right-wing Yisrael Beitenu party Avigdor Liberman and leader of the New Right party Naftali Bennett. Then there were former Likud Defense Minister Moshe Ya’alon and even the popular former IDF chief whom Gantz replaced in 2011, Lt. Gen. (res.) Gabi Ashkenazi. However, Ashkenazi, tarnished by scandal (the Harpaz affair) over a falsified document and ugly turf war, waited too long to decide; Liberman missed his chance in the 2015 elections; Bennett was trampled by Netanyahu’s political machine and Lapid was unable to break through his glass ceiling. Benny Gantz, the man from nowhere, did it.

On the final days before the April 9 elections, the polls paint a confusing picture. Some have Likud neck-and-neck with Gantz’s Blue and White party (a merging of the Israel Resilience Party and Yesh Atid), but with an advantage for the right-wing bloc. One poll had Likud bypassing Blue and White to lead the race once again by one or two Knesset seats. Survey results by top-rated pollsters Mina Tzemach and Manu Geva for Channel 12 news have Gantz pulling ahead of Netanyahu’s Likud by an impressive four seats. None of the polls give the center-left bloc led by Gantz any prospects of overtaking Netanyahu’s bloc.

But the 2015 elections taught pollsters and analysts that public opinion surveys are valid only for the moment, at best. Nonetheless, unlike the 2015 elections, this time Mr. Security Netanyahu is facing three former IDF chiefs (Gantz along with Ya’alon and Ashkenazi who have joined him), two highly regarded former major generals (Elazar Stern and Orna Barbivai), and the lean, well-oiled political machine Yair Lapid built for Yesh Atid. This is a completely new ballgame.

Gantz turns 60 this coming June. He is the son of Holocaust survivors from Romania and Hungary. The Nazis at Bergen-Belzen murdered Gantz’s grandfather on his mother’s side. Gantz grew up on a cooperative farm (a moshav) and attended a national-religious school. He started his military service in the paratroopers, rising through the ranks and gaining a reputation as a relaxed, sometimes too relaxed, officer. A combination of coincidences, great luck and support from higher-ups paved the way for his repeated promotion, despite his average performance. He was chosen for the top IDF slot by default after a corruption scandal forced out the leading candidate, Maj. Gen. (res.) Yoav Galant. Gantz was only fourth in line on the list of candidates favored by Netanyahu and his then-Defense Minister Ehud Barak, but he got the job against all odds and after he had already been decommissioned.

Gantz was known as an easy-going army commander who avoided infighting — a team player who just wanted to make it home safely. Nonetheless, he was appointed the IDF’s 20th chief of staff and saw through a reasonable four-year term during which the Arab Spring transformed the Middle East and Israel went to war with Hamas in a 2014 campaign codenamed Operation Protective Edge. Gantz adhered to the line espoused by the generation before him — Ashkenazi, late Mossad chief Meir Dagan, former military intelligence head Amos Yadlin and former Shin Bet agency head Yuval Duskin — who were all firmly opposed to an Israeli attack on Iran’s nuclear facilities. On this issue, Gantz displayed rare determination and adherence to principle.

Upon leaving the army, Gantz took a coast-to-coast road trip through the United States and then turned to business. Here, too, his career was unimpressive. The Fifth Dimension, a cyber technology firm he chaired in recent years, collapsed before it could sell even one product. Meanwhile, Gantz racked up mileage in various Western capitals, maintained ties he had made when serving as Israel’s defense attache in Washington and built up a following. He also built up a donor base and collected quite a bit of money before he entered politics, when he was still allowed to do so. When he decided to form a political party, he was equipped with a supportive economic infrastructure.

Talk of politics started emerging some two years ago, initially at a low key. At that point, Gantz did not even dream of having his own party. He believed what had been said and written about him — that a relatively sensitive guy like himself would not survive for even 15 minutes in the cruel arena of Israeli politics. Gantz conducted quiet talks with Netanyahu and considered offers to serve as defense minister in his government. He then played around with the offer to serve as foreign minister and even as Israel’s ambassador in Washington. At that point, however, polls started gauging his popularity. The results stunned the political arena. Three years after leaving his job as the country’s top soldier, the public viewed Gantz as the only credible alternative to Netanyahu. He decided to turn down Netanyahu and establish a party of his own.

The plan was simple. A new party would catapult Gantz ahead of Labor Party chief Avi Gabbay and Yair Lapid and pull the rug out from under them. Ya’alon, who had not managed to go it alone at the head of the small Telem party, would join Gantz. He would then draw in Lapid and perhaps popular Knesset member Orly Levy-Abekasis, who had also formed a party of her own.

From then on, everything went according to plan. Gantz founded Israel Resilience, signed up Ya’alon and together they soared in the polls to over 20 Knesset seats. Lapid and Gabbay, on the other hand, crashed. Lapid hesitated, deliberated, agonized and decided to demand that Gantz share the prime minister’s job with him under a rotation model in return for joining him. To everyone’s surprise, Gantz agreed. Yesh Atid joined, followed by the mother of all trophies when Ashkenazi, particularly popular with Likud voters, took the plunge and joined the group, giving them over 30 Knesset seats in the polls by early March, where they have remained to date.

Gantz will need a lot more of the luck he enjoyed throughout his military career to translate the poll results into a real shot at the premiership. His party will have to garner more votes than the Likud, and he will have to hope that one or more of the small right-wing parties does not get enough votes to make it into the Knesset, thereby weakening the right-wing bloc. He needs President Reuven Rivlin to task him with forming Israel’s next government (if he gets more votes than Netanyahu’s Likud). He needs a total cosmic storm and combination of circumstances to unseat the man who took control of Israeli politics and dominated them for the past decade. As of now, storm clouds are gathering on the horizon. On Wednesday morning, April 10, we will know whether they are real.