Against odds, Netanyahu revives his fortunes

The Israeli prime minister takes out a terrorist foe, puts Iran’s Soleimani on notice and effectively sinks rival’s chances to form a new government — not a bad week. 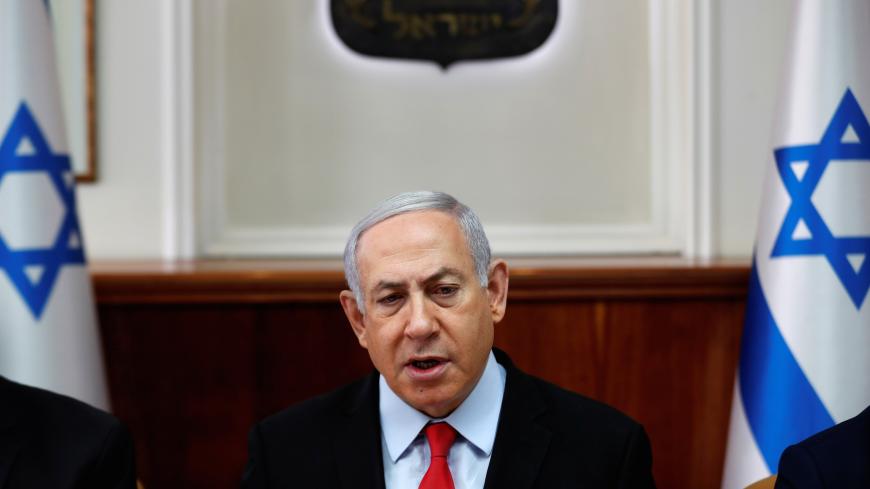 It starts with the targeted killing of Palestinian Islamic Jihad (PIJ) leader Baha Abu al-Ata with an Israeli airstrike on his home in Gaza Nov. 12.

In addition to taking out one of Israel’s most implacable terrorist foes, Bibi advanced his interests in two other areas as well: He gave notice to Israel’s most wanted, Islamic Revolutionary Guards Quds Force commander Qasem Soleimani, that he could be next, and he appears to simultaneously have sunk rival Benny Gantz’s options of cobbling together a minority government with Arab Joint List support.

Not a bad week for a man still facing possible indictment for corruption, and whose political fortunes may be hanging by a thread.

And despite a good week, he is still hanging by that thread.

A ‘question of timing’

Abu al-Ata was commander of the northern division of the PIJ in Gaza, and the main instigator of terror and attacks on Israel.

Israel had had enough, and took him out via airstrike Nov. 12. Islamic Jihad, the main agent of Iranian influence in Gaza, launched a barrage of rockets into Israel in response. Israel intercepted most of the rockets, and only three Israelis were wounded. Israeli airstrikes killed 34, 16 of whom were civilians, including eight children, according to the Health Ministry in Gaza.

The UN and Egypt brokered a cease-fire between Israel and the PIJ Nov. 14. Hamas, the Palestinian party that rules Gaza, stayed on the sidelines.

“Setting aside the cost-benefit analysis of killing top terrorists, evil as they may be, there is the question of timing,” writes Akiva Eldar. And by timing, Eldar means the impact of events on the efforts of Gantz and his Blue and White Party to form a government.

The plan was that Gantz would get "outside" support of at least four to five of the 13 elected members from Arab parties to unseat Bibi and form a minority government.

The Joint List, as it is known, is made up of four parties: Hadash, led by Ayman Odeh; the Arab Movement for Change, headed by Ahmad Tibi; the Islamists led by Mansour Abbas; and Balad, headed Mtanes Shehadeh.

The flirtation between Gantz and the Arab parties was probably always going to remain a tease. Even before the hit on Abu al-Ata, Gantz was heckled for any dealings with "the Arabs." Avigdor Liberman, head of the right-wing Yisrael Betineu party (with eight Knesset seats) and presumed power broker of the next government coalition, would have nothing to do with the Joint List. The three Balad members, for their part, were never on board.

“It is impossible to ignore Netanyahu's successful campaign of delegitimization against Israel’s Arab citizens, claiming that they should not be able to impact the formation of the government,” writes Afif Abu Much. “Measures considered standard and legitimate in any democratic country in the word, such as joining a coalition, are deemed worthy of condemnation when it comes to Israel’s Arab citizens and their representatives.”

But the Joint List parties won’t support targeted killings or attacks in Gaza under any conditions, even while having absolutely no affinity for Islamic Jihad. Gantz, of course, had no choice but to support the strikes. By doing so, writes Daoud Kuttab, “Gantz pushed himself away from any potential cooperation with the Arab Joint List and forced him to find a coalition solution with Avigdor Lieberman or Netanyahu.” Or failing that, a third round of elections.

A ‘sort of’ Israel-Hamas alliance against the PIJ

Bibi’s move against Abu al-Ata also has the odd benefit of quietly doing a favor to his longtime enemy, Hamas, the Arabic acronym for the Islamic Resistance Movement, and perhaps driving a wedge in its relationship with Tehran. Hamas has sought to simultaneously govern and deliver services in Gaza while maintaining its mantle as a resistance organization with ties to Iran. Abu al-Ata and the PIJ, in contrast, are full-fledged Iranian proxies with limited popular support.

“Al-Ata had been quite a thorn in the side of the Hamas leadership over the past year,” writes Shlomi Eldar. The PIJ had “adopted an increasingly provocative line against Hamas, which finds nothing more insulting than being portrayed to Palestinians everywhere as having abandoned its holy war to collaborate with the 'devil.' Al-Ata struck at Hamas’ sensitive underbelly: its image. Hamas would have long ago arrested and jailed him had he not been a senior commander in an organization backed by Iran, which Hamas does not want to anger now that it has restored ties with Tehran following a lengthy disruption by its former political chief Khaled Meshaal.”

Ben Caspit characterizes the shared interest between Israel and Hamas against the PIJ as a "sort of" alliance.

“Israel did Hamas’ dirty work for it, and Hamas hopes that Islamic Jihad got the message,” Shlomi Eldar concludes. “For now, Israel has every reason to believe that Hamas is serious and willing to push ahead with a deal on a long-term truce and the easing of Israel’s blockade of Gaza.”

Is Israel sending a message to Soleimani?

Israel’s record on targeted killings is mixed. While no one has taken the place of Hezbollah Chief of Staff Imad Mughniyeh, killed in Damascus in 2008, Hezbollah leader Hassan Nasrallah has been a more than formidable replacement for Abbas al-Musawi, killed by Israel in 1992.

But targeted killings also serve to put Israel’s enemies on notice: You are never safe.

Israel’s security forces considered both Abu al-Ata and Soleimani “as almost completely independent figures,” writes Ben Caspit, “uninhibited by their mother organizations. They represent a new class of independent terror generators that are not necessarily connected to any political chain of command. Abu al-Ata had stuck out his tongue at Hamas, torpedoed all efforts for an arrangement between Israel and Hamas and tried to usurp Hamas’ sovereignty in the Gaza Strip. Similarly, according to high-placed Israeli military sources, Soleimani conducts a completely independent policy in the Lebanese, Syrian and Iraqi spaces. He is not synchronized with Iranian President Hassan Rouhani and speaks only to Supreme Leader Ayatollah Ali Khamenei.”

Scorecard: A good week, but still on a thread

For Netanyahu, it was a good week, but the wins may be more tactical or temporary than strategic.

First, the killing of Abu al-Ata itself is an unqualified win. Even in Gaza, there are likely few sincere tears for him. But Iran and the PIJ may not see the latest round as a total loss. The PIJ claims that it agreed to halt rocket attacks in return for Israel ending targeted killings and agreeing to not shoot Palestinian protesters on the Gaza-Israel border. Islamic Jihad “solidified their standing vis-a-vis Israel, Hamas and Egypt,” writes Shlomi Eldar. “Iran, too, can be pleased that its unconditional aid for the organization paid off in saving its proxy from having to surrender to Israel.”

Second, with regard to Soleimani, he can probably rest easy for now. Despite his rhetoric, Netanyahu is in no rush to blow things up in the region. According to Israeli sources, Netanyahu has reportedly held off on taking action against Soleimani. Of course this could all change under Bibi, Gantz, Liberman or any future prime minister. There are strong voices in the Israeli security establishment calling for such action.

Third, Netanyahu may have buried the Gantz option for a minority coalition, but that was a long shot anyway. The real action is when Attorney General Avichai Mandelblit indicts Netanyahu for bribery ahead of the mid-December deadline, as Caspit reports. If that indeed happens ahead of schedule, Bibi may be out of the coalition politicking.