Hamas' silence amid the violence with Israel indicates that the rulers of Gaza are shedding no tears over the fate of assassinated Islamic Jihad leader Bahaa Abu el-Atta, and the escalation is benefitting Israel's embattled prime minister as well. 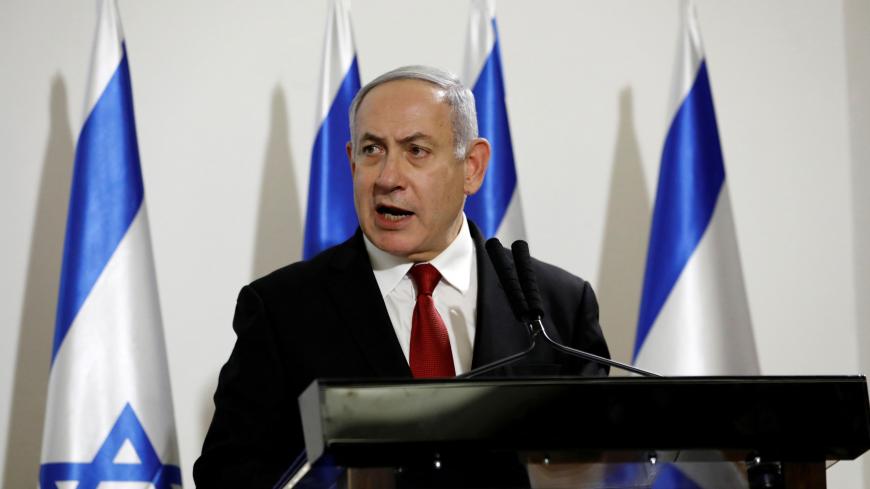 Islamic Jihad senior Bahaa Abu el-Atta is out, and Quds Force commander Qasem Soleimani is still in. They were the two highest-level troublemakers whose photographs graced the offices of Israel’s defense system. But on the morning of Nov. 12, a few hours after he was killed in Gaza, al-Ata’s picture was removed from the walls of the Defense Ministry and the prime minister’s office. Soleimani’s photo is still there.

The Israeli defense system saw both men as almost completely independent figures, uninhibited by their mother organizations. They represent a new class of independent terror generators that are not necessarily connected to any political chain of command. Abu el-Atta had stuck out his tongue at Hamas, torpedoed all efforts for an arrangement between Israel and Hamas and tried to usurp Hamas’ sovereignty in the Gaza Strip. Similarly, according to high-placed Israeli military sources, Soleimani conducts a completely independent policy in the Lebanese, Syrian and Iraqi spaces. He is not synchronized with Iranian President Hassan Rouhani and speaks only to Supreme Leader Ayatollah Ali Khamenei.

A high-ranking Israeli military source told Al-Monitor on condition of anonymity, “We aren’t fighting Iranian policy; our sights are not focused on Khamenei or Rouhani. The one we have to cope with is Qasem Soleimani, period. He’s our man, no one else.”

Under such circumstances, Israel must be strongly tempted to focus on Soleimani. But in the past, Israel saw its targeted killings backfire out when it emerged that the successor to the job was much worse than the predecessor. The best example is that of Hezbollah leader Hassan Nasrallah, who inherited the position from Abbas al-Musawi, who was killed by Israel in 1992.

There have been few times when the targeted killing policy proved itself because the felled leader turned out to be irreplaceable. The best example was the killing attributed by the foreign media to Israel, of Hezbollah chief of staff Imad Mughniyeh in Damascus in 2008. No worthy replacement has yet been found.

Bahaa Abu el-Atta has been in Israel’s sights for many years. His formal position was commander of the northern division of Islamic Jihad in Gaza, which did not worry the IDF. But in practice, he was the group's strong man in the Strip. He initiated most of the terror attacks, the rocket launchings and other provocations. In the past year, however, al-Ata humiliated Hamas time after time by violating the cease-fires with Israel. He did whatever he could possibly do to prevent Hamas and Israel from achieving calm. Abu el-Atta also humiliated Prime Minister Benjamin Netanyahu personally: Netanyahu delivering a speech at an election rally in the southern town of Ashdod Sept. 10 when Abu el-Atta decided to launch rockets at Ashdod and Ashkelon. Thus the prime minister, who was hastily evacuated by his security guards, suffered a painful, public blow only a week before the Sept. 17 elections. Netanyahu commanded Abu el-Atta’s elimination that very evening, but it was blocked by Attorney General Avichai Mandelblit, who instructed the prime minister to convene the cabinet properly and come to a lawful decision. On Tuesday, though, Netanyahu settled his accounts.

Abu el-Atta's death was not his only victory this week. With one action, Netanyahu scored three important goals: Abu el-Atta was gone, and with him went any chances for Blue and White leader Benny Gantz to create a narrow minority government with the support of the Arab parties. The Israeli public is unlikely to support such a move in the midst of escalation. And New Right senior Naftali Bennett, Netanyahu’s ancient nemesis who succeeded in extricating the defense portfolio from Netanyahu last week, suffered a public humiliation: Abu el-Atta was eliminated five hours before Bennett assumed his new position. And so the credit for the operation went to Netanyahu alone.

This event, which ignited another round of fighting between Israel and Islamic Jihad, came at exactly the right time for the prime minister. While Gantz and his people are trying to stitch together a minority government with external support from the Arab factions, they find that the Arab Knesset members consistently oppose two things: Israel’s assaults in the Gaza Strip and targeted killings. The Arab lawmakers expressed their opposition again this week and the possibility of a narrow coalition died a premature death. Now only two options remain: a unity government or a third round of elections, exactly what Netanyahu wanted.

Another important thesis was proven this week: For all intents and purposes, Netanyahu and Hamas are sort of allies. As of Wednesday morning, Hamas is not taking part in the rounds of fighting. Islamic Jihad launched 220 rockets as of the time of this writing alone, while Hamas sits on the fence and limits itself to verbally condemning Israel. Abu el-Atta a problem not only for Israel (and Egypt), but also for Hamas. He was a violent, belligerent and uncontrollable element, and no Hamas tears will be shed for him.

Netanyahu and Hamas share almost the exact same interests: They want to preserve the differentiation between the Strip and the West Bank in order to perpetuate the deadlock in the political/diplomatic sphere and preserve the “no partner” argument. Hamas wants to strengthen its regime to improve the living conditions of the Gaza public, and to prepare to conquer the West Bank. As of now, all these interests converge at the same point. Netanyahu has long since forgotten his election promises at the beginning of 2009, when he announced that once he was prime minister, he’d give the IDF orders to destroy the Hamas regime in Gaza. But several things have changed since then. Now the Hamas regime is one of Netanyahu’s most important diplomatic assets and Netanyahu plays the demon Hamas needs to perpetuate its rule.

For the first time since the Gaza disengagement in 2005, Israel is not exacting a price from Hamas for its rockets. Instead, Israel focuses only on Islamic Jihad. Even should Hamas unwillingly join the fighting in the coming days, that at least 30 hours passed in which Hamas held back and let Islamic Jihad wear itself out against the Israeli war machine is truly unprecedented.