The Israeli military operation to kill Islamic Jihad commander Bahaa Abu al-Atta was planned months in advance, after a series of rockets were fired toward Israel, including on Ashdod while Prime Minister Benjamin was delivering a speech there. 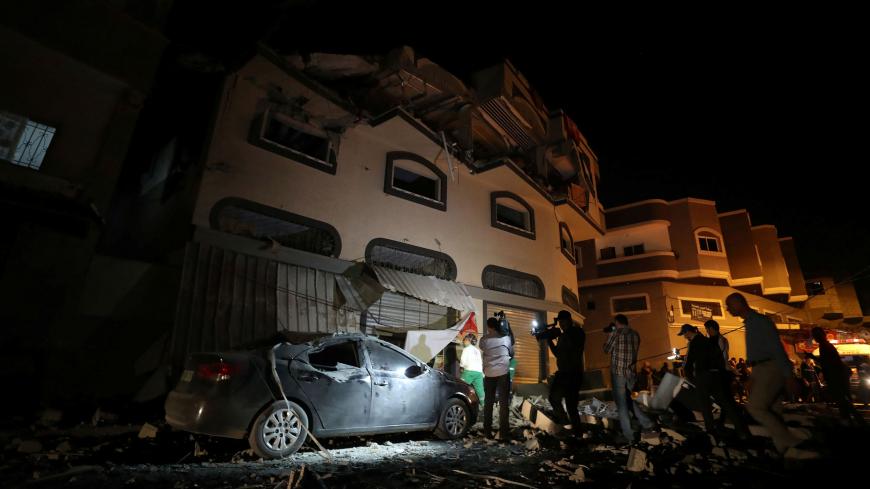 Members of the media and others gather at the home of Palestinian Islamic Jihad commander Baha Abu al-Atta after it was hit in an Israeli airstrike that killed him in Gaza City, Gaza, Nov. 12, 2019. - REUTERS/Mohammed Salem

On Nov. 12, Israel killed Bahaa Abu el-Atta, commander of the northern district of Islamic Jihad, in an air strike into Gaza. Abu el-Atta was one of the most influential members of the organization, in some respects even more so than its secretary-general, Ziyad al-Nakhalah, who resides in Syria. The decision to kill Abu el-Atta had been made in September.

Abu el-Atta was responsible for the launch of a rocket toward the southern Israeli city of Ashdod during a Sept. 10 election campaign speech there by Prime Minister Netanyahu. It wasn’t the embarrassment to Netanyahu that led to the decision to kill him, but because the group had acted out of arrogance and defiance toward Israel. There was no other apparent reason for Islamic Jihad or Hamas to have carried out such a brazen attack.

At the time, I had written in Al-Monitor that the rocket fire toward Ashdod represented a formative moment and that Israel's security establishment had made fateful decisions in its aftermath. Netanyahu, as later reported, ordered preparations for a large military operation, and Justice Hanan Melcer, chair of the Central Election Committee, was even told to prepare for a possible delay of the elections scheduled for Sept. 17. Thus, the suggestions and declarations of figures in the political establishment that political calculations had led to Abu el-Atta's assassination in the early morning hours of Nov. 12 are baseless.

In fact, Abu el-Atta had been marked by the Israel Defense Forces (IDF) and Shin Bet close to the April elections, following provocations he had planned and actual attacks carried out in the period leading up to the Eurovision Song Contest scheduled for Tel Aviv on May 18. Hundreds of rockets were launched toward Israel from Gaza, raising concerns about whether the competition would even take place. After the contest, the IDF, in an unusual move, published Abu el-Atta’s photo as an intimation and a threat: If Islamic Jihad continues to run wild, Israel knows who’s responsible and will lay hands on him.

Islamic Jihad received the message as IDF had intended and warned Israel against assassinating Abu el-Atta, claiming that the response would “shake the Zionist land.” Israel's message had also been directed at Hamas, taking the form of a demand that it calm or rein in Islamic Jihad if it was indeed interested in advancing toward a long-term truce for Gaza. The Egyptians also entered the picture.

In October, the Egyptians invited Abu el-Atta and Nakhalah to Cairo for a round of talks with their security chiefs. It wasn’t simple for the Egyptians to hold a dialogue with an organization directly and exclusively supported by the Iranians, but following the meetings, they released dozens of prisoners affiliated with Islamic Jihad. The Egyptians understood that any cease-fire arrangement with Israel could not happen without Islamic Jihad's buy-in, so they settled on a carrot-and-stick approach.

The direct contact with Egypt apparently gave Abu el-Atta unwarranted confidence. This seems to have been the reason that the most-wanted man in Gaza became complacent, resulting in the IDF and Shin Bet being able to locate him living at a secret apartment with his wife, who was also killed in the Israeli attack, and his children, who were wounded.

After the assassination, IDF spokesman Hidai Zilberman told reporters, “His military influence was over all of the Gaza Strip and not just its northern sector. It was a very surgical action, and the IDF really wanted to keep it that way, without expanding the operation. In recent months, Baha instigated most of the activity in the Gaza Strip, including the battles before Memorial Day [in May] and the last rocket barrage at the beginning of the month and more. He was a ticking time bomb and planned to imminently direct concrete rocket fire into the area surrounding Gaza and planned sniper and infiltration attacks as well as drone attacks. We saw that in preparation in the field.”

Zilberman further said that in recent months Israel had tried without success to dissuade Abu el-Atta from terrorist activity and that his killing had been authorized through proper procedures in the Cabinet a week prior. “Chief of Staff Major General Aviv Kochavi initiated and pushed for the action when he understood there was no other choice,” Zilberman emphasized.

A day after surprising rocket fire toward the southern town of Sderot, Blue and White Chairman Benny Gantz on Nov. 2 committed to renewing the policy of targeted assassinations should he head the next government, which he is in the process of attempting to form. He apparently did not know that the decision to kill Abu el-Atta had already been made. In recent days, the IDF had waited for a moment to kill Abu el-Atta without harming civilians.

The IDF well remembers the assassination of Salah Shehadeh, commander of Hamas' military wing, in 2002 during the second intifada. The use of a one-ton bomb for the operation resulted in the deaths of 14 civilians, many of them children. Fear of killing the innocent was the reason why a year later the IDF dropped a quarter-ton bomb on a home where the Hamas leadership had gathered, including Sheikh Ahmed Yassin, the movement's leader and co-founder; Ismail Haniyeh, Hamas prime minister; and Mohammed al-Deif and Ahmed Jabari, leaders of the group's military wing. The decision to drop a relatively small bomb was also why the “dream team,” as then-Shin Bet chief Avi Dichter described those assembled, survived.

The central question now is how Hamas will react. Its relationship with Islamic Jihad is complicated. In principle, Hamas' leaders would welcome being rid of the headache Islamic Jihad has been causing them. They have no need for another military organization acting almost independently on the territory under their control. They also understand, however, that it's not in their interest to cross Islamic Jihad’s patron, Iran. Thus, they swallowed the frog and allow Islamic Jihad to operate in Gaza, and when needed, even try to use it against Israel, agreeing to operational cooperation with it.

No one would say so in Hamas, but one can assume that there was a sense of relief about Abu el-Atta’s assassination within the movement's ranks. The strengthening of Islamic Jihad's military arm has been a thorn in their side, especially with it trying to present itself as the leader of the true jihad against Israel while Hamas moderated and worked toward an arrangement with it. Of course, there’s also concern that one day Islamic Jihad will do to Hamas what Hamas did to Fatah in 2007 — revolt and seize power.

Mindful of Palestinian public opinion, it seems that Hamas, as the authority controlling Gaza, must respond in some way to the assassination of a “brave Palestinian warrior.” One can assume that it will be such that the IDF can let it go and quickly dispense with the current conflict. That said, there are rebels in Hamas who could drag Gaza into war. Preventing such a scenario will test the leadership of Yahya Sinwar in Gaza.