Israel fears that escalation in the Gaza Strip and rockets by Islamic Jihad will chase away the thousands of tourists expected to come to Tel Aviv for the 2019 Eurovision Song Contest. 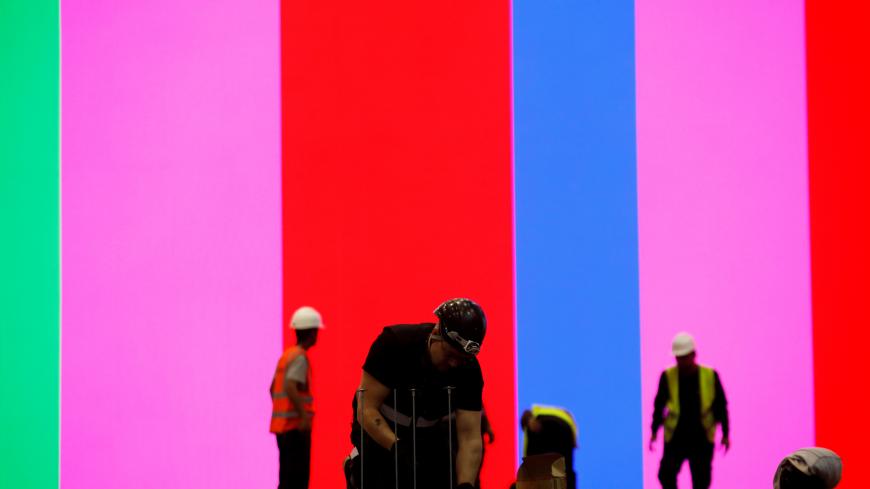 Laborers work on the construction of the stage and setting where the 2019 Eurovision Song Contest shows will be hosted at the Expo in Tel Aviv, Israel, April 15, 2019. - REUTERS/Amir Cohen

Bahaa Abu el-Atta. That’s the name of the greatest threat to the current state of relative calm along the border between Israel and the Gaza Strip. As commander of the northern sector of Islamic Jihad, he initiates, leads and directs the group’s most recent attempts to blow up efforts to reach an arrangement between Israel and Hamas. Abu el-Atta received on April 30 an explicit personal warning from the Israel Defense Forces (IDF). His name and photo were disseminated to the media, and he was marked by Israeli sources as the man holding the match. Israeli military sources believe Abu el-Atta gave the order to fire a rocket from Gaza into Israeli territory on April 29, and that he was behind Islamic Jihad’s attempts to attack the IDF — in addition to its “low-profile” efforts to fire rockets at Israel. As aforementioned, such a rocket was fired on the evening of April 29, provoking a nonmilitary Israeli response. This could, however, lead to a Palestinian reaction, which would ignite a confrontation in the region. Israel’s warning to Abu el-Atta could be interpreted as an explicit threat that he is being targeted for assassination. It can also be seen as indicative of genuine Israeli concerns that Abu el-Atta could ruin Israel’s grandiose plans for what is scheduled to take place in Tel Aviv in the middle of the month.

The annual Eurovision song contest is scheduled to take place in Tel Aviv May 14-18 in a series of events including semifinals and culminating in the final. This is the biggest music event in the world with the greatest number of viewers. Dozens of delegations representing the various nations of Europe — as well as a few add-ons, or non-Europeans, like Israel and Australia — will compete in a colorful song competition. In mood, this is usually a liberal carnival, flamboyant and free of inhibitions. Israel has been preparing for the event for the past year. It sees Eurovision as an opportunity to highlight the liberal, cosmopolitan face of Tel Aviv, and in fact, the city will be filled with tens of thousands of European tourists. Social networks and television stations will be inundated with clips spreading Eurovision's message, contributing to Israel’s image and its growing tourism industry. It provides a sharp contrast to the conservative, religious processes that Israeli society has experienced over the past few years.

Abu el-Atta is putting all that at risk. According to Israel, he is operating under direct orders from Islamic Jihad leader Ziad Nahala, who divides his time between Lebanon and Syria and is in close contact with the Iranians. According to some assessments, his goal is to blow up Eurovision, bringing catastrophe to Israel’s reputation and signaling to Hamas and the entire region that Islamic Jihad has its own, separate policies and will not bow its head before Israel. On the other hand, Israel has deep reservations about how best to respond. A military confrontation now, which could send the people of Tel Aviv running for their shelters and even threaten Ben Gurion Airport, could cause enormous damage.

Even before Eurovision, Israel will be celebrating its Independence Day on May 9, which is also Nakba Day for Palestinians. All of these components are now stewing in a single pressure cooker crammed with gunpowder. They could result in another war that nobody really wants — nobody, that is, except for the main supporters and funders of Islamic Jihad: Iran’s Islamic Revolutionary Guard Corps.

Hamas is also facing a dilemma. On one hand, the group wants to put Islamic Jihad back in its natural position in the pecking order and suppress the dangerous independent streak it has been exhibiting of late. On the other hand, Hamas leaders Yahya Sinwar and Ismail Haniyeh both know that they cannot allow themselves to be depicted as collaborating with Israel while Islamic Jihad is seen as the last group to carry on the resistance. Hamas is worried that Islamic Jihad will do to them what they did to the Palestinian Authority with the 2007 coup, and they cannot allow that to happen. The biggest problem they face is the alternative. As one senior Israeli military source told Al-Monitor on condition of anonymity, “They [Hamas] know that if they go to war with Israel, they will suffer a devastating blow and not get anything out of it. It is not at all certain that Hamas could survive another round like that without paying a hefty price or even losing power.” Under these circumstances, Sinwar finds himself facing the same dilemma as Israeli Prime Minister Benjamin Netanyahu. Outwardly, he needs to give off a sense of strength and determination; at the same time, he has to act cautiously and show restraint on the ground in order to avoid any unnecessary adventurism.

Throughout all this, contacts between Israel and Hamas continue in an effort to reach a “mini-arrangement,” which would restore order and calm to the region and allow everyone to come up with a new path forward. Netanyahu needs this mini-arrangement urgently. He is forming a new government, he has to get through Independence Day and he does not want to allow Islamic terrorism to ruin Eurovision — even though his electoral base doesn’t really care about the European song festival, which is identified to a large extent with the LGBTQ community around the world. That is why the IDF’s responses over the past two weeks to the dribble of rockets and incendiary balloons have been rather low key. Israel makes threats, releases the name of a senior commander of Islamic Jihad and declares that it has no reservations about getting involved in a conflict, even if it is the eve of Eurovision. On the ground, however, it shows real restraint. The question is whether Nahala and Abu el-Atta will share this restraint.

Israel’s restraint has run into obstacles in the political realm as well. Coalition negotiations will reach the decisive stage right after Independence Day. Netanyahu will have to convince Yisrael Beitenu head Avigdor Liberman to return to the Ministry of Defense and give up some of his demands. The most complicated demands made by Liberman as conditions to enter the coalition are related to Netanyahu’s ultra-Orthodox allies on religious affairs. Also, Liberman resigned as Minister of Defense in 2018 precisely because he demanded a massive military operation in Gaza and Netanyahu refused. Now, given Islamic Jihad’s new threats and the fact that the ground is heating up again, Netanyahu will have to make Liberman come to terms, no matter how distasteful, with Islamic Jihad. It is not at all certain this will work. Liberman has been tough in his coalition negotiations with Netanyahu until now. He has made it perfectly clear that he has no intention of giving up his demands concerning religion and state, the conversion process against the position of the ultra-Orthodox and enlisting the ultra-Orthodox in the IDF. If the Gaza Strip gets added to the mix, Netanyahu could find himself with Eurovision but without a government.

Spoiler alert: The chances of this happening are very slim. Nevertheless, there will be a few tense weeks ahead, particularly for all the players on the field and most particularly for Benjamin Netanyahu.