The latest round of violence showed Israel that Hamas and the Islamic Jihad have each an impressive arsenal of rockets and improved abilities to use them. 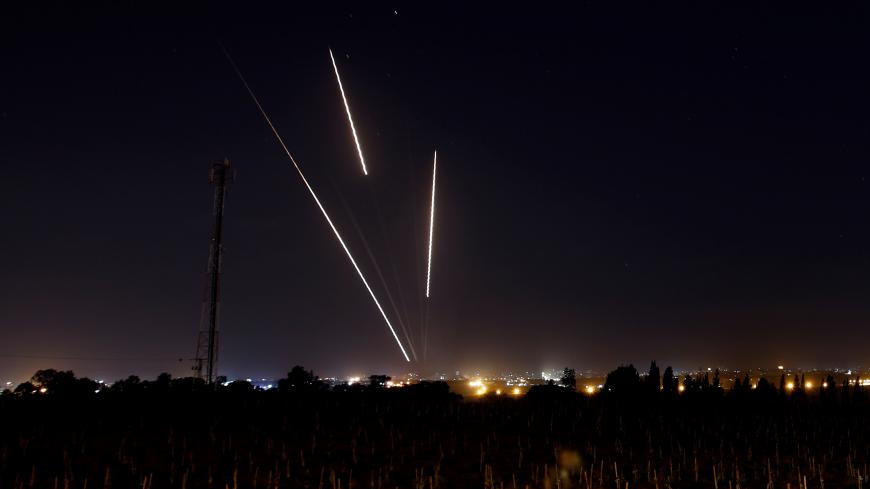 Streaks of light are seen as rockets are launched from the Gaza Strip toward Israel, March 25, 2019. - REUTERS/Amir Cohen

The Israeli security echelon believes that an arrangement with Hamas would guarantee that the recently agreed-on cease-fire would be upheld. According to publications, Israel and Hamas agreed May 6 to end the fatal round of escalation of the past weekend. At the Cabinet meeting at noon May 5, after more than 400 rockets had been fired into Israel that day (over 650 rockets were fired in less than 48 hours), the Israel Defense Forces (IDF) reprised the same old song that the fire must be contained. In other words, the IDF was saying that Israel should indeed strike back, but wisely, in order not to break the rules of the game. The IDF estimates that without an advance in reaching an arrangement, any quiet or cease-fire would last mere days or weeks until the next round, which would likely be more severe and more fatal.

But, and it’s a big but, this last conflict with Gaza, which was the most fatal since Operation Protective Edge in 2014, created serious doubts among those in Israel who believe that improving Gaza’s economy would ensure against the next war. It seems that every time, there’s another reason or even a misunderstanding that drags the two sides to an armed conflict, even unwillingly. And in the meantime, Hamas and the Islamic Jihad continue in their arms race, stockpile more rockets more powerful than the previous ones and challenge the Iron Dome missile defense system with massive fire. This time, too, Hamas and Israel did not plan on a violent round of fire and certainly not a war, but we can assume that if not for the Eurovision song contest that is to take place in Tel Aviv next week and Israel’s Memorial Day and Independence Day events on May 8 and May 9 the picture would look different.

While Likud ministers argued that the Eurovision, expected to be watched by hundreds of millions of people, is not a consideration in the conflict with Hamas, these were idle words. The IDF received instructions from the political leadership to end the conflict this week, even before Memorial Day eve, and obviously before the Eurovision. Its cancellation would have given Hamas an enormous victory and would have caused damage to morale and a sense of a loss of control in Israeli public opinion.

Hamas also was not interested in war right now, at the beginning of the month of Ramadan, which started this week. But as so often is the case, Hamas was dragged into the conflict unwillingly. This time the Islamic Jihad was the one that pushed for a conflict with Israel, which at first responded carefully until events quickly escalated to 650 rockets; four Israelis and 32 Palestinian were killed. And after all that, we’re going back to the understandings that preceded the escalation.

The question is whether the equation that an arrangement is equal to quiet holds the risk of reaching a point of no return. Could Israel allow itself to be captive to the estimate that the arrangement is inevitable? Must it close its eyes to Hamas’ and the Islamic Jihad’s continued arming, which in this latest short round managed to threaten southern cities such as Ashkelon, Beersheba, Ashdod and Kiryat Gat?

Data collected by army intelligence, some of which was published in Haaretz on May 5, present a worrisome picture that should cause decision makers in Israel to lose sleep — among both the political and military classes.

On the eve of Operation Protective Edge, most of the rockets Hamas possessed were short-range ones that threatened only the perimeter of the Gaza Strip. Only a few of them were medium- and long-range rockets that threatened the outskirts of Jerusalem, the Tel Aviv area and north of it. At least half of the rockets were destroyed in the 50 days of fighting in 2014.

Today, in 2019, Hamas has, according to the estimate of intelligence sources, between 5,000 and 6,000 rockets, dozens of them with a range of more than 100 kilometers (62 miles). The Islamic Jihad has an even larger stockpile of about 8,000 rockets, most of them short- and medium-range, but also several hundred long-range rockets that threaten the Tel Aviv region. Some of the rockets have heavy warheads weighing 90 kilos (nearly 200 pounds) or more. In the current round, Hamas and the Islamic Jihad did not feel threatened enough to use the long-range rockets.

As published in Al-Monitor last week, the main reason Hamas doesn’t get into a conflict with the Islamic Jihad, which tries to challenge it and entangle it with Israel on a regular basis, is that this group managed to grow and arm itself with impressive firepower that it could use in a violent conflict with Israel. This united force [Hamas/Islamic Jihad] gives Hamas greater deterrence capability.

The nearly 14,000 Hamas and Islamic Jihad rockets aimed from the Gaza Strip toward Israel have created a situation where Israel is more vulnerable than ever in the south. Only Hezbollah has a larger and more precise stockpile of rockets, but the results of the Second Lebanon War and the Israeli threat to destroy Lebanon in a case of rocket fire deter the group.

After the cease-fire was reached this week, Hamas and the Islamic Jihad leaders boasted that they had found a “solution” to overcome the Iron Dome system by firing dozens of rockets simultaneously toward one target. We can assume that this capability will only be enhanced leading up to the next conflict.

Since the 2007 Hamas revolution in Gaza, the two large organizations in the Strip have succeeded in building an impressive deterrence system and balance of fear against Israel. Prime Minister Benjamin Netanyahu, since returning to the office of prime minister in 2009, has been warning the world of Iran’s nuclear threat — but just under our noses, mere kilometers from Tel Aviv, a significant threat to the daily life of an entire country has grown. These rockets, as of now, are not an existential threat to Israel, but by using them, Hamas and the Islamic Jihad have succeeded in bending Israel again and again, and now, too, after the cease-fire, they will certainly continue in their arms race toward the next conflict.

Ten years after Netanyahu’s rise to power, Israel finds it difficult to enter into a significant war to destroy the weapons stockpiles that threaten its border because of the heavy price it would be expected to pay. This price will rise every day of the arrangement the two sides are working on with the mediation of Egypt.

Thus, it wouldn’t be an exaggeration to claim that any mass culture or sports event taking place just dozens of kilometers from Gaza — or more, such as Eurovision — is actually under the threat of rockets from Gaza. The arrangement with Hamas is now in advanced stages, and it seems that despite internal opposition within the Israeli right wing, Netanyahu won’t stop its enactment. The biggest question is how the quiet (to the extent that it is maintained) will enable the IDF to act against the arms race of Hamas and the Islamic Jihad, which doesn’t stop for a minute. We have now been exposed to some of the capabilities the two organizations have amassed, and will certainly continue to amass.