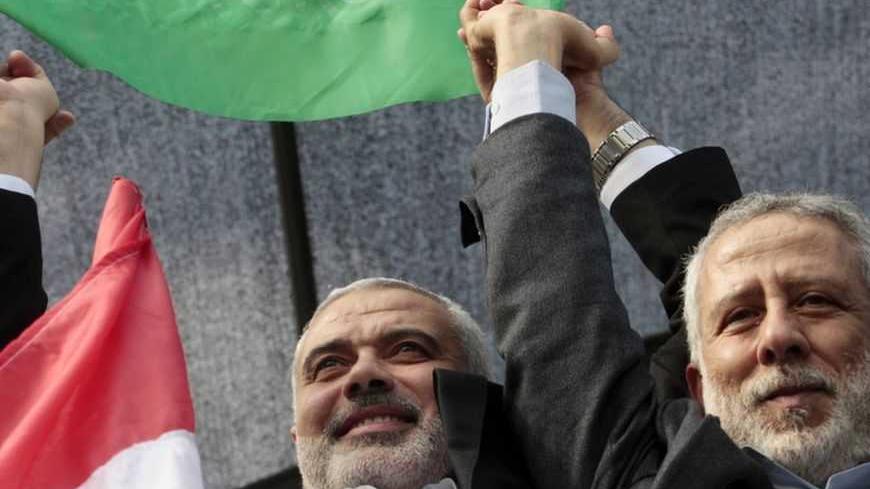 As far as the Al-Quds Brigades, the armed wing of the Palestinian Islamic Jihad, are concerned, 2012 was their golden year. For the first time, it managed to use qualitative weapons that seemingly altered the pace of the Israeli-Palestinian conflict.

Abu Ahmad, Al-Quds Brigades spokesperson, referred to the four years between the Israeli assault on Gaza in 2008-2009 and the most recent in November 2012 as the reason behind the progress. Islamic Jihad fighters intensified their training following Israel’s war on Gaza in 2008-2009, including receiving a significant upgrade to its weapons capabilities and logistical support from foreign friends, most notably Iran.

“The last assault was such a fruitful experience for us; it was such a practical training that obviously proved we have developed,” he told Al-Monitor.

Much of Islamic Jihad’s military improvements can be attributed to support in recent years from Iran and Syria, according to Mukhaymar abu Sa’ada, political analyst and lecturer at Al-Azhar University.

“The armed wing of the Islamic Jihad has been receiving Iranian and Syrian support recently, which allowed it to have a marked precedence on the ground,” he said.

Abu Ahmad confirmed that Iran remains Islamic Jihad’s main supporter, but added that there were other minor foreign contributors which he refused to disclose. Iranian support was not a choice for Islamic Jihad, Abu Ahmad stressed, as Tehran was the only foreign state willing to support the Palestinian resistance.

“We are not the only Palestinian armed group that receives an Iranian support, but we are the one that admits it the loudest. We feel it’s like an inevitable gratitude,” he told Al-Monitor.

“I wonder why Iranian support for Palestinian armed groups is not acceptable as we are the victims, while the American support for Israel is acceptable despite Israel being the aggressor,” he added.

Islamic Jihad has been receiving Iranian backing since it was founded in the 1970s. The support is not only limited to military aid, Tehran also sponsors families of Islamic Jihad prisoners and injured fighters of the faction.

Hamas’ strained ties with the Islamic Republic over the Syrian crisis have not hindered Islamic Jihad’s relationship with Tehran, and thus, Iran’s ability to influence Palestinian affairs in the Gaza Strip.

The benefits of its close ties to Iran were revealed in Islamic Jihad’s improved performance in the latest confrontation with Israel.

Islamic Jihad was the first to fire long-range rockets at Tel Aviv in the latest round, and in the view of abu Sa’ada, has moved to the top of the military brass out of all the armed groups in Gaza.

It also demonstrated its newly improved cyber capabilities, succeeding for the first time to hack the cell phones of more than 5,000 Israeli soldiers, sending threatening text messages in Hebrew in what the armed wing termed the “War of Nerves.”

Al-Quds Brigades boast a force of thousands of fighters who work according to different tasks. Fighters do not usually operate together on the field unless there is an Israeli ground invasion, like in the 2008-09 war. During the Pillar of Defense, Islamic Jihad only deployed its rocket unit.

Since the cease-fire was implemented in November, Israel has committed continued violations, including shooting at farmers near the border and arresting fishermen almost on a daily basis. But, like Hamas, Islamic Jihad says it is committed to respecting the cease-fire, and played a major role in Egypt’s mediation efforts.

Abu Ahmad said that his faction insisted on having the item of “right of response” included in the cease-fire deal, and warned that his movement will not stand idle should Israeli violations continue.

“There’s an Egyptian committee that’s tracking the cease-fire, Israeli violations and our commitment, but if Israel crosses the red line, we will certainly respond,” he warned.

In an ominous sign of the fragility of Hamas’ ability to restrain Palestinian factions, Abu Ahmad stressed that his faction reserves the right to respond to any Israeli attack without consulting Hamas, citing an “agreement that was previously made to respond to any serious Israeli violation.”

The two armed wings of Hamas and Islamic Jihad are, for the time being, coordinating to maintain the cease-fire, but their fighters rarely cooperate on the ground when violence flares.

Islamic Jihad sustained some damage to its infrastructure in the latest Israeli attack, but most was unscathed. Improving its military infrastructure and ability to hide its weapon storage facilities from Israel is one of the main objectives for Islamic Jihad following Pillar of Defense.

“Every offensive Israel wages on Gaza is usually harder than the previous. This is why we are focusing now to strengthen our infrastructure and to store more weapons,” Abu Ahmad said.

Al-Quds Brigades has also recently began producing its weapons locally due to the increasing challenges of smuggling weapons through the Gaza tunnels that cross into Egypt. It is also much easier to receive financial support to produce the necessary weapons at home, with blueprints supplied.

“Our local rockets proved their high level of proficiency, especially in the latest round of the battle,” Abu Ahmad said.

While headlines around the world have largely credited Hamas with achieving a new balance with Israel, it cannot be undernoted that the actions of Islamic Jihad have significantly contributed to the new reality on the ground.

Abeer Ayyoub graduated form the Islamic University of Gaza with a BA in English literature. She is a former human rights researcher turned journalist whose work has appeared in Al Masry Al-Youm, The Daily Mirror, and Haaretz.