Why Hamas stayed out of Gaza battle

This is not the first time that the Hamas movement leaves Islamic Jihad alone in a military confrontation with Israel. 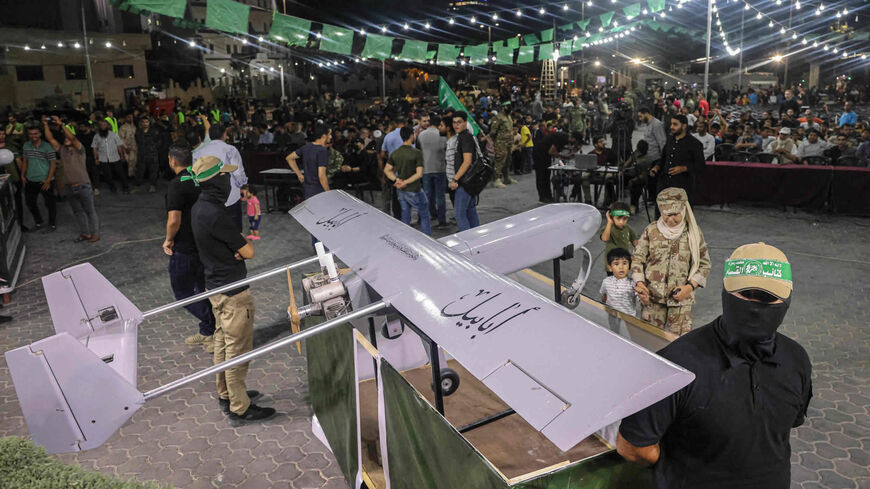 Members of Al-Qassam Brigades, Hamas' military wing, stand next to a model of an Iranian Ababil drone during a rally in the Palestinian town of Khan Yunis, southern Gaza Strip, July 26, 2022. - Said Khatib/AFP via Getty Images

From Aug. 5 — the day Israel killed Taysir al-Jaabari, commander of Al-Quds Brigades’ Northern Brigade — until Aug. 7 — the day Israel and Islamic Jihad announced a cease-fire under Egyptian mediation — the Hamas movement, which is the largest armed faction in the Gaza Strip, left Islamic Jihad alone in its battle that came in retaliation to Jaabari’s assassination.

Islamic Jihad dubbed the operation against Israel the “Unity of Battlefields,” in reference to the strategy of unifying the battlefields of the Gaza Strip, Jerusalem, the West Bank and the territories inside the 1948 Green Line, in a bid to thwart Israeli plans to separate the resistance in Gaza from the rest of the Palestinain territories.

This battle was triggered by Operation Breaking Dawn, which Israel launched against Islamic Jihad only, under the pretext of “ending a tangible threat to the citizens of Israel and [the settlements] in the Gaza envelope,” a joint statement by Israeli Prime Minister Yair Lapid and Israeli Defense Minister Benny Gantz read as reported by the Israeli Yedioth Ahronoth paper Aug. 5.

On Aug. 8, Israel’s Makan Public Service radio reported that at the start of Operation Breaking Dawn, Israel delivered to Hamas the message that this military operation was not directed against the movement. It called on Hamas not to join Islamic Jihad in the fighting, in exchange for refraining from attacking any of Hamas’ positions inside Gaza.

Hamas spokesperson Fawzi Barhoum said in an Aug. 5 statement, “The Israeli enemy is the one that initiated the military escalation against the resistance in Gaza, it must pay the price and bear full responsibility for it.”

He added, “All of the resistance factions’ military wings are united in the battle against Israel.”

Despite Barhoum’s comments, Hamas did not make use of its strategic stockpile of rockets, and did not announce having fired any rocket at Israel during the three-day battle between Israel and Islamic Jihad.

Hamas’ decision not to take part in the recent battle was not a first. On Nov. 12, 2019, when Israel assassinated Baha Abu al-Ata, Jaabari’s predecessor, in Gaza, Islamic Jihad retaliated by firing rockets at Israel. However, Hamas did not launch any rocket toward Israel back then in order to avoid an escalation in light of the poor living conditions in Gaza, Hamas leader Basem Naim had told the BBC back then.

Hamas’ role seems to have shifted from resisting Israel in the previous four wars on Gaza to rushing a mediation that led to the cease-fire between Israel and Islamic Jihad during the current round of confrontations.

He also described Hamas as the backbone of the Palestinian resistance, despite the wide-scale popular criticism leveled against Hamas on social media for not taking part in the battle. Nakhala added that although Hamas did not participate, it provided a favorable environment for Al-Quds Brigades, the Islamic Jihad’s military wing, during the latest battle and stressed that Hamas and Islamic Jihad consist of a unified front against Israel.

According to the Aug. 8 report on Hamas’ website, Haniyeh contacted Nakhala by phone and agreed that the two movement’s leadership will soon hold a meeting to discuss the political and field developments so as to fortify the strategic course of the armed factions’ future.

Islamic Jihad spokesperson Tariq Salmi told Al-Monitor that the movement engaged in the Unity of Battlefields operation with a unified Palestinian position, and stressed that there was coordination between the military wings of the national and Islamic armed forces during the battle.

He, however, said that the largest military action during the battle was carried out by Islamic Jihad because of the assassination of military commanders from Al-Quds Brigades.

He added, “The mediators who spoke openly with Islamic Jihad with the aim to reach a cease-fire are the Egyptian mediators, before the Qatari side and the UN joined the mediation efforts.”

Hassan Abdo, writer and political analyst close to Islamic Jihad, told Al-Monitor that the fact that the battle was limited to three days only before reaching the cease-fire is due to regional pressure placed on Islamic Jihad.

He said that Hamas played an important role in the efforts to reach a cease-fire by communicating with the Egyptian, Qatari and UN mediators.

However, Abdo believes that Hamas’ nonparticipation in the battle is an opportunity for Islamic Jihad to demonstrate its military capabilities, which are not very clear in the eyes of the Palestinian public that perceives the movement as a small organization in terms of military capabilities compared to Hamas.

He noted that the Islamic Jihad’s military capabilities were demonstrated through the 130 rockets that were fired within 10 minutes at Tel Aviv and the settlements in the Gaza envelope during the latest battle.

Iyad al-Qara, political writer close to Hamas, told A-Monitor, “Hamas did not join Islamic Jihad in the recent battles because of its belief this confrontation round was not linked to national causes, including the Jerusalem cause that pushed Hamas to launch the 'Sword of Jerusalem Battle' in May 2021.”

He said, “Rather, Islamic Jihad engaged in this battle for reasons related to its prisoners, hence its demand to release its hunger striker prisoner [Awawdeh] and others, which does not require that Hamas enters into a military confrontation with Israel. Hamas gave Islamic Jihad the liberty to choose how to retaliate to the assassination of its military leader in Gaza.”

Qara said that the Palestinian street was divided over Hamas’ nonparticipation in the current battle. “First, some in the Palestinian street believe that the Israeli occupation has directly targeted Islamic Jihad by assassinating its military leaders. Also, the movement’s military wing, Al-Quds Brigades, lost 12 martyrs during the Unity of Battlefields operation. In light of this, some popular demands called on Hamas to intervene and stop the killing of Islamic Jihad leaders and members.”

He added, “On the other hand, others in the Palestinian street saw that Hamas’ interference in the current round of battles will complicate the situation. They believe that since Hamas — which has been ruling the Gaza Strip since 2007 — is the largest resistance faction and thus has more positions and sites that could be targeted by Israel, this could have led to a longer military battle. This is why some Palestinians were relieved that Hamas did not join Islamic Jihad, especially after Israel threatened Hamas should it enter the confrontation.”

Talal Okal, political writer for the Palestinian Al-Ayyam paper, does not believe that Hamas’ nonparticipation in the military battle will lead to tension with Islamic Jihad. “This is because Islamic Jihad is not a political competitor of Hamas, which rules the Gaza Strip; rather it is a resistance movement that works against Israel only,” he told Al-Monitor.