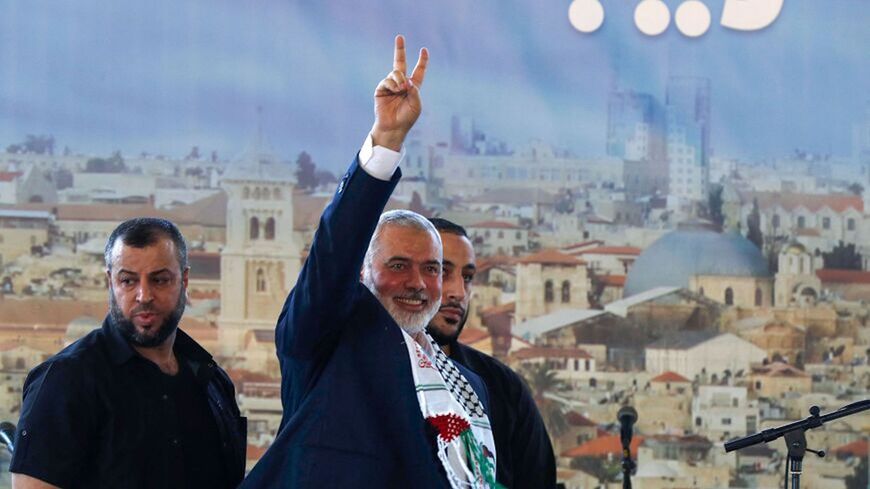 The Palestinian Hamas movement's leader Ismail Haniyeh flashes the victory sign following a speech at a rally during his visit to the southern Lebanese city of Saida on June 26, 2022. - MAHMOUD ZAYYAT/AFP via Getty Images

PIJ and the 'Unity of Battlefields'

The three-day war between Israel and Palestinian Islamic Jihad in Gaza last week didn’t start in Gaza, although Gazans again paid the heaviest price. The spark began in the West Bank, in Jenin, which is increasingly under the sway of Hamas, the Islamic resistance movement that rules Gaza, and its smaller and more militant counterpart, Islamic Jihad.

The Israeli Defense Forces launched "Operation Wave Breaker" in March of this year to contain and crack down on these armed groups and to disrupt terrorist operations inside Israel.

PIJ called its military effort against Israel "Unity of Battlefields," a reference to linking the Gaza, West Bank and Jerusalem resistance activities by it and Hamas. It's been the strategy of the two Gaza factions since the May 2021 war between Gaza and Israel.

“The West Bank is the scene of a continuous war of attrition,” writes Ahmed Melhem from Ramallah, “with daily raids and special operations by the Israeli army into Palestinian cities and villages.”

Last year’s Gaza war was sparked by the PA’s decision to cancel elections, followed by an Israeli court decision to evict four Palestinian families from east Jerusalem and the storming of the Al-Aqsa Mosque compound by Israeli security forces. The rioting and violence even spread to Arab communities inside Israel.

This time, the spark came on Aug. 2, when Israeli forces arrested one of PIJ’s leaders, Bassam Al-Saadi, who was shown on video being dragged injured from his home in the Jenin refugee camp.

In addition, 70 Israelis were injured along with damages to buildings along the Gaza border.

The Associated Press, based on its own investigation and an Israeli military assessment, reported that 14 of the Palestinians killed, including some of the children, came as a result of errant PIJ missiles rather than Israeli airstrikes.

Hanady Salah reports from Gaza on the human tragedy of those families who lost loved ones in the conflict.

Hamas wins by sitting out

Hamas scored by staying on the sidelines and helping broker a cease-fire. Its pedigree as the leader of the Palestinian resistance seems mostly left to its West Bank franchises, where PIJ will continue to be a junior partner. Hamas, which governs in Gaza, was not ready for a replay of the May 2021 war with Israel, with its terrible human and economic toll on Gazans and resulting political fallout.

This time it was PIJ’s show. Its people were the ones arrested and harassed, so PIJ would take the lead. Hamas leaders gave full rhetorical support, but it ended there.

“Hamas’ role seems to have shifted from resisting Israel in the previous four wars on Gaza to rushing a mediation that led to the cease-fire between Israel and Islamic Jihad during the current round of confrontations," writes Mai Abu Hasaneen from Gaza.

PIJ also made clear that it too could claim a win following the fighting and that all was good with Hamas.

At a press conference  in Tehran on Aug. 7, Islamic Jihad Secretary-General Ziad al-Nakhala said that that as part of the cease-fire, Israel would release  al-Saadi and Kahlil Awawda, a Palestinian prisoner on hunger strike in Israeli jails.

Nakhala described Hamas as the “backbone of the Palestinian resistance,” as Abu Hasaneen reports. “Nakhala added that although Hamas did not participate, it provided a favorable environment for Al-Quds Brigades, the Islamic Jihad’s military wing, during the latest battle and stressed that Hamas and Islamic Jihad consist of a unified front against Israel.”

Does Israel have a hudna with Hamas?

Israeli Prime Minister Yair Lapid seemed to boost his security bona fides ahead of the Nov. 1 elections with Operation Breaking Dawn, as the military campaign was called, while revealing a deft political touch with the Israeli communities most impacted by the fighting, as Mazal Mualem reports.

But the sense of Israeli accomplishment was not just about politics; Israel’s security establishment also saw this operation as an unambiguous and overdue success, including by preventing escalation with Hamas, Lilach Shoval reports.

Ben Caspit writes, “This was Israel’s first military operation against Gaza terrorist groups since 2009 from which it emerged with a sense of  strategic victory. The last time that happened was the three-week Operation Cast Lead that began in late December 2008 and was the swan song of then-Prime Minister Ehud Olmert.”

That "strategic victory" included, Caspit writes, “keeping Hamas out of the fighting, cutting Islamic Jihad down to size to contain its threat and restoring its deterrence. On the other hand, metaphorically, the IDF as the neighborhood bully took on the weakest kid on the bloc. While hardly an evenly matched fight, that same IDF has scored nothing more than a dignified tie in the past.”

Israel’s approach to Gaza over the past year may have some quiet buy-in from Hamas, at least for now: a "hudna," or cease-fire, Caspit explains, that could have a longer than expected shelf life.

Since the Israel-Hamas war last year, the coalition government of Lapid and his alternate premier, Naftali Bennett, has allowed more workers from Gaza into Israel, a boost for the Gaza economy. Unemployment is down and commerce is up. While many Gazans endure hardships to work in Israel, they are still willing to take the opportunity offered for much higher wages, as Amany Mahmoud reports from Gaza.

Life for many of Gaza’s 2 million Palestinians remains unbearable, Hadeel El Gerbawi reports from Gaza, made even more miserable by an electricity crisis and erosion of Gaza’s beaches.

Hamas may see an advantage is keeping with Israel’s "economics first" approach, at least for now, which is why it opted for mediation over escalation.

An Israeli diplomatic source told Danny Zaken, “An opportunity has come for a longer-term arrangement with Hamas based on civil measures. Of course, it also means giving up at least temporarily on ousting Hamas from Gaza and accepting the constant strategic threat from the Strip.”

“While this may not be a full-fledged ‘hudna,’ nor a honeymoon of any kind between Israel and Hamas, it could herald the start of something real if both sides are careful to nurture the current achievements," Caspit concludes. “Sadly, the prospects of something going wrong and burying these dreams are far greater than the other possibility. Both peoples will be forced to continue holding each other by the throat for many years to come.”

It's perhaps no surprise that quick and agile Egyptian mediation in Gaza again saved lives and prevented a further escalation in violence. It is a similar story to last year, when US President Joe Biden praised his Egyptian counterpart, Abdel Fattah Al- Sisi, for his role in ending the May 2021 11-day war.

There was more praise for Egypt a year later. Lapid expressed his thanks and US Secretary of State Antony Blinken expressed gratitude "for the unstinting efforts" of Egypt in mediating the cease-fire, also acknowledging the roles of Qatar, the UN and the Palestinian Authority.