Despite the cease-fire in the Gaza Strip between Palestinian Islamic Jihad and the Israeli army, the West Bank remains volatile. 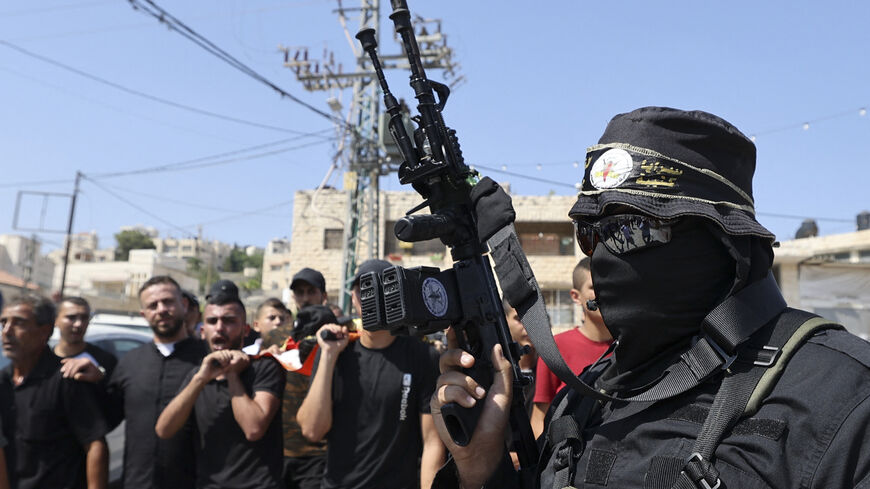 A fighter affiliated with the Palestinian Islamic Jihad movement marches as men carry the body of Dhurar al-Kafrini, reportedly killed during clashes with Israeli forces in the Jenin refugee camp during his funeral at the camp in the occupied West Bank on Aug. 2, 2022. - JAAFAR ASHTIYEH/AFP via Getty Images

RAMALLAH, West Bank — After three days of fighting that killed dozens of Palestinians in the Gaza Strip, Israel and Palestinian Islamic Jihad reached an Egyptian-brokered truce that came into force late on Aug. 7.

The cease-fire agreement is vulnerable as the Israeli military operation against Islamic Jihad, codenamed “Breaking Dawn,” has not been limited to the Gaza Strip. Before the fighting, Israel had targeted Islamic Jihad members in the West Bank, specifically in Nablus and Jenin. On Aug. 2, Israeli forces arrested one of the group’s leaders, Bassam al-Saadi, from his home in the Jenin refugee camp. Video footage of the incident showed an injured Saadi, being dragged by soldiers.

Islamic Jihad demanded the release of Saadi as well as Khalil Awawda, a Palestinian prisoner on hunger strike.There are no guarantees Israel will fulfill these demands.

Although the fighting in Gaza has stopped, the turmoil in the West Bank is still ongoing. The Israeli army clamped down on Islamic Jihad members in the West Bank, arresting several of the movement’s leaders and members.

Meanwhile, armed groups affiliated with Islamic Jihad in the West Bank declared a state of alert and mobilized its militants against Israeli forces. They stand ready to respond to Israeli incursions into cities and villages in the northern West Bank.

Islamic Jihad leader Maher al-Akhras told Al-Monitor that Israel has been fighting the group for months, targeting dozens of its leaders and members across the West Bank. He pointed to “an Israeli plan to uproot and prevent the expansion of the Islamic Jihad and its military wing, al-Quds Brigades, in the West Bank," saying, "The resistance in the West Bank is led by the Islamic Jihad, and started from Jenin with the formation of the Jenin Brigade [in September 2021] and spread to other governorates such as Nablus, Tulkarm and Tubas.”

This situation prompted the Israeli army to launch its operation “Wave Breaker” in late March, which failed to contain the resistance in Jenin.

Akhras added that during the latest offensive on Gaza, the Israeli army pursued Islamic Jihad members in the West Bank. He said, “On the first day of the offensive, Islamic Jihad staged a massive rally in Jenin, in which thousands of citizens marched. For fear that these rallies would be replicated in other governorates, Israel launched a campaign of arrests in less than 24 hours against Islamic Jihad leaders who took part in this march, including Bassam Diab, Sheikh Nasr Amour, Najah Habayba and many others.”

He continued, “Israeli forces raided the homes of the movement's leaders in the West Bank, wreaking havoc in them. Israeli intelligence officers threatened dozens of the movement's members who were not arrested. Since the beginning of this month, at least 50 Islamic Jihad leaders have been arrested. Israel fears Islamic Jihad’s ideology will spread in the West Bank and the movement will gain more followers and supporters. This is why it is targeting its leadership.”

He explained that light weapons used by the fighters of al-Quds Brigades can only superficially damage the fortified Israeli vehicles. “The resistance in the West Bank cannot be compared to the resistance in Gaza,” he said, “Any act of resistance in Jenin and the West Bank, no matter how simple, worries Israel more than Gaza's rockets.”

Akhras argued, “Fighters in the West Bank cannot throw down their weapons and allow the Israelis to storm their cities and camps without confronting them. Should the Israeli army raid the Jenin camp, for example, the resistance’s response would be brutal. The West Bank could become a massive conflict zone, even possibly exceeding the Gaza Strip.”

The West Bank is the scene of a continuous war of attrition, with daily raids and special operations by the Israeli army into Palestinian cities and villages. Most recently, on the morning of Aug. 9 in the Old City of Nablus, an Israeli operation triggered one of the fiercest armed clashes with Palestinians in years. The Nablus Brigade in the West Bank said that it participated in the battles and lost three of its resistance fighters, including commander Ibrahim al-Nabulsi.

Writer and political analyst Hassan Abdo told Al-Monitor that Israel is facing a new emerging situation in the West Bank, where more areas are falling outside the control of the Israeli security forces and the Palestinian security services in the northern West Bank, specifically in Jenin. “This shift has inspired some young Palestinians and is spreading to Nablus and Tulkarm, and may spread more widely in the south of the West Bank,” he said.