Al-Quds Brigades, the military wing of the Palestinian Islamic Jihad, announced the formation of a new Nablus Brigade following the Flag Day marches. 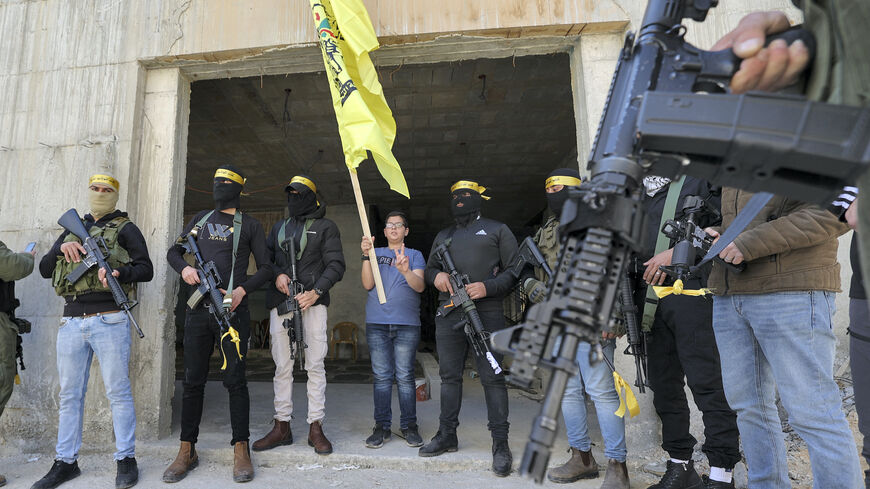 Members of the "Martyr Abu Ammar Brigades" (alias of Yasser Arafat), part of Al-Aqsa Martyr's Brigades faction affiliated with the Fateh movement, stand with small arms during the funeral of Islamic Jihad militant Chas Kamamji in his home village of Kafr Dan, west of Jenin in the occupied West Bank, on April 14, 2022. - JAAFAR ASHTIYEH/AFP via Getty Images

RAMALLAH, West Bank — In the two days that followed the controversial flag march organized by Israeli far-right settlers in East Jerusalem on May 29, several shootings against the Israeli army and settlers were reported in the West Bank. Twelve shooting operations were reported, while 35 explosive devices were thrown at Israeli military checkpoints and posts across the West Bank, with the most incidents recorded in Jenin and Nablus.

Al-Quds Brigades, the Islamic Jihad’s military wing, claimed responsibility for most of these attacks that came days after it announced the formation of the “Nablus Brigade” on May 25, following clashes between Israeli police and Palestinians near the flashpoint Joseph’s Tomb in Jenin.

In its first statement following its formation, the Nablus Brigade said that four of its members successfully set up an ambush for Israeli forces and settlers who stormed Joseph’s Tomb,wounding several. The statement added that the brigades’ members then withdrew successfully.

The Nablus Brigade is similar to the Jenin Brigade, which was formed in September 2021 after six Palestinian prisoners, including five from the Islamic Jihad, escaped from the Israeli high-security Gilboa Prison.

Through these brigades, Al-Quds Brigade has seemingly strengthened its presence in the West Bank, which could lead to more confrontations with the Israeli army and more difficulties during Israeli incursions in the West Bank cities.

For months now, the army has conducted almost daily incursions into the Jenin refugee camp, resulting in armed clashes. The formation of the Nablus Brigade may aim to ease the pressure on the Jenin camp and allow for the Islamic Jihad to reorganize its military action.

Violence between Palestinians and Israeli forces in the West Bank has escalated since early April. The armed clashes had been coupled with several deadly attacks against Israelis inside Israeli territories. Violence is more likely to grow in the absence of any political solutions and amid Israel’s ongoing raids in West Bank cities and villages, killings, arrests and violations at Al-Aqsa Mosque. This situation could prompt fighters from other Palestinian factions to join the Islamic Jihad brigades or to form similar military groups.

The rising tensions in the West Bank prompted the Israeli army to launch Operation Break the Wave to prevent more attacks inside Israel. However, it seems the operation has failed to limit or end the resistance in Jenin, which instead seems to have spread to other West Bank cities.

On May 23, al-Quds Brigades announced the formation of the Tulkarm Brigade, which means that the three major cities of the northern West Bank (Jenin, Nablus and Tulkarm) have now joined the confrontation against the Israeli forces.

Meanwhile, some expect the Nablus Brigade to carry out major attacks against Israeli settlers, since Nablus is surrounded by Israeli settlements and military checkpoints. The brigade could also play a major role in countering the repeated settler incursions into Joseph’s Tomb.

The brigade could also prompt coordination with the rest of the Palestinian factions, namely Al-Qassam Brigades (Hamas’ military wing) and al-Aqsa Martyrs' Brigades (Fatah’s military wing), similar to the unified fighting front in the Jenin camp.

Sheikh Khader Adnan, a prominent Islamic Jihad official, told Al-Monitor that the Jenin resistance model has become an inspiration for all Palestinian areas.

Adnan added, “Announcing the formation of the Nablus Brigade, and previously the Tulkarm Brigade, is an imitation of the Jenin model, and will help transfer the idea of ​struggle, resistance and revolution to the rest of the Palestinian areas. The recent response to the Israeli army that we witnessed in Nablus was praised by Palestinians, as is the case in Jenin.”

Adnan believes that what is happening in the West Bank is a natural response to the Israeli attacks, specifically in Jerusalem and Al-Aqsa Mosque. “The resistance’s mission is to defend the people, the land and holy sites,” he added.

Forming armed battalions, he said, "would alleviate security pressure on the Jenin governorate and its brigade and allow it to survive longer" in the face of Israeli incursions.

Sari Orabi, Palestinian author and political analyst, told Al-Monitor that as militancy in the northern West Bank expands to other cities, "it also reflects the weakened Palestinian Authority’s hegemony in the West Bank. What is happening is not only a rebellion against the occupation, but also against the PA.”

Orabi added, “This experience could also reach the central and southern parts of the West Bank soon. … The expansion of militancy will distract the Israeli security efforts, multiply the chances of targeting Israel, and increase its security challenges, and perhaps its losses.”

So far, the military brigades, whether in Jenin, Nablus or Tulkarm, seem to have a local, not a central leadership, and lack combat capabilities, even if they have the will to fight.

Yet, the expansion of this model may lead to an escalation, to coordination between the factions and military groups and to a unified command room not only in Jenin or Nablus, but in the West Bank as a whole. It could be similar to the joint operations room in the Gaza Strip in the event of a much more serious escalation.