Tensions flare in Jerusalem over flag march despite caution in Gaza

The flag march in Jerusalem sparked confrontations and clashes that quickly expanded to several sites in the West Bank, in a scene reminiscent of the beginnings of the second Palestinian intifada in 2000. 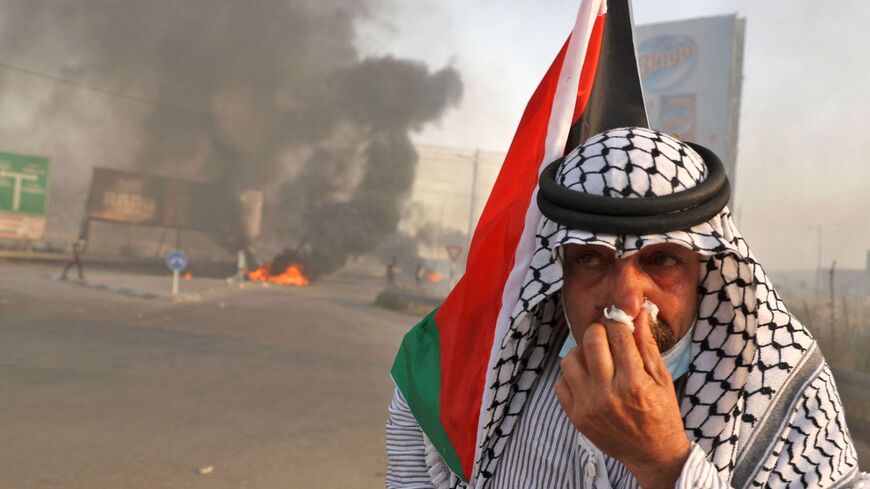 A protester holds a tissue to his nose while holding a Palestinian flag near a tire fire during clashes with Israeli forces following a demonstration to denounce the annual nationalist flag march through Jerusalem, at the Israeli-controlled Hawara checkpoint near Nablus in the occupied West Bank, on May 29, 2022. - JAAFAR ASHTIYEH/AFP via Getty Images

RAMALLAH, West Bank — Clashes erupted in Jerusalem on May 29, as nearly 70,000 far-right Israelis took part in the controversial flag march through East Jerusalem under the protection of more than 3,000 Israeli police. Palestinian factions had warned against the demonstration last week, with Hamas threatening to respond with "all means."

In the early morning hours of Sunday, the Israeli police entered Al-Aqsa Mosque, surrounding dozens of worshippers and reportedly locking several inside as they closed the mosque’s doors with iron chains in preparation for the settlers’ march that began at 7 a.m.

The flag march, which peaked as demonstrators arrived at Bab al-Amud Square and the Islamic neighborhood in the Old City, was preceded by far-right Israelis storming into Al-Aqsa, led by Knesset member Itmar Ben-Gvir.

Some 1,800 Israelis managed to break into the mosque twice during the day.

For the first time since the occupation of Al-Aqsa Mosque in 1967, these marchers raised the Israeli flag in its courtyard, performing provocative collective dances, Talmudic prayers, or what they call “epic prostration.” They were met with chants and calls of "Allahu Akbar" by the Murabitun (Palestinian volunteers who protect the mosque and continuously resist the incursions).

The Israeli police cracked down on Palestinians to secure the march, launching a spate of arrests at the outer gates of Al-Aqsa, notably the Chain Gate. They also attacked the Murabitun, the paramedics, and put up military checkpoints inside the Old City and along the roads leading to Al-Aqsa.

Speaking about the flag march participants, Ikrima Sabri, Al-Aqsa’s preacher, told Al-Monitor, “What they did on May 29 has not happened since the mosque’s occupation back in 1967.”

“They prostrated in Al-Aqsa courtyards. They chanted, danced and raised the Israeli flag, cursing the prophet and Arabs, all this under the protection of the Israeli police, which indicates the Israeli government’s desire to escalate matters and its compliance with the settlers’ trends and approach,” he said.

Sabri added that “despite what happened, Israel failed to impose its sovereignty over Al-Aqsa and Jerusalem. Despite the deployment of thousands of policemen and the state of alert in the city, it failed to frighten the Jerusalemites who defended their mosque and city and managed to raise the Palestinian flag everywhere.”

The Israeli police cracked down on Jerusalemites under political cover amid instructions from Israeli Prime Minister Naftali Bennett to deal firmly and forcefully with anyone opposing the march.

The police had evacuated the Bab al-Amud area and closed shops in the Old City.

Despite all the security measures, the Palestinians defied the police, stood up to the participants in the flag march and managed to raise the Palestinian flag near Bab al-Amud, which prompted the Israeli police to attack and arrest them.

Palestinians also managed to fly a drone carrying a Palestinian flag over the march.

They also launched a countermarch that started off on Salah al-Din Street in the center of East Jerusalem, which was met with Israeli rubber bullets, tear gas and sound bombs. Dozens of participants were arrested and other were beaten with batons.

Israeli marchers attacked shops and clashes broke out in different locations in Jerusalem.

Tensions have been running high in the city and escalated during the holy month of Ramadan in April, with the far-right Israelis and the police’s storming of Al-Aqsa Mosque and cracking down on worshippers.

The situation flared up with the killing of Palestinian journalist Shireen Abu Akleh and the attacks on mourners during the funeral procession in which hundreds of Palestinians participated.

Violent clashes also erupted with the funeral of Walid al-Sharif.

According to the Palestine Red Crescent Society (IFRC), 62 people were injured in the vicinity and inside the Old City, with 28 people transferred to the hospital for treatment and the rest treated in the field. The IFRC said that one of the injuries was the result of live ammunition.

At least 50 civilians were arrested, including women and children, in Jerusalem and areas near Bab al-Amud, neighborhoods of the Old City and in Al-Aqsa Mosques, according to the Palestinian Prisoners Club.

Meanwhile, Israeli forces reported that 13 settlers were wounded, including two policemen, as the result of the confrontations.

At the end of the flag march, participants launched several attacks on neighborhoods in the city, storming into Palestinian homes in Sheikh Jarrah neighborhood in the center of occupied East Jerusalem, throwing stones at houses and smashing parked cars.

Similar clashes also broke out in the neighborhoods of Silwan, al-Tur and al-Isawiya.

At the same time, other cities and towns of the West Bank witnessed confrontation and fighting, during which 163 Palestinians were injured, 20 with live bullets and the rest by tear gas and rubber-coated metal bullets.

According to local media, clashes broke out in 190 locations between Israeli forces and Palestinians in 24 hours through different sites in the West Banks, with 12 shooting attacks and 35 explosive devices targeting Israeli military sites, checkpoints, vehicles and buses.

Demonstrations and marches swept through 33 areas, while clashes erupted during which Palestinians threw stones at Israeli occupation forces in 94 sites in the West Bank.

Although the clashes in Jerusalem extended to the West Bank, Gaza remained unexpectedly calm without any response from the Palestinian factions.

The situation that might change in light of Hamas politburo head Ismail Haniyeh, who was quoted May 30 by his adviser Taher al-Nunu as saying that what is happening in Jerusalem will “not be forgiven.”

He added that Haniyeh “refused to give any pledges or guarantees to any party of what could be done inside occupied Palestine.”

Meanwhile, some of the military factions in Gaza said that the battle with Israel is open and the “resistance shall decide how to respond to the occupation forces."