Dawn of protest: Palestinians stand against 'deal of century' at prayers

Palestinians flock to holy sites in the Great Fajr Campaign, to protest the "deal of the century" and its implications for Haram al-Sharif. 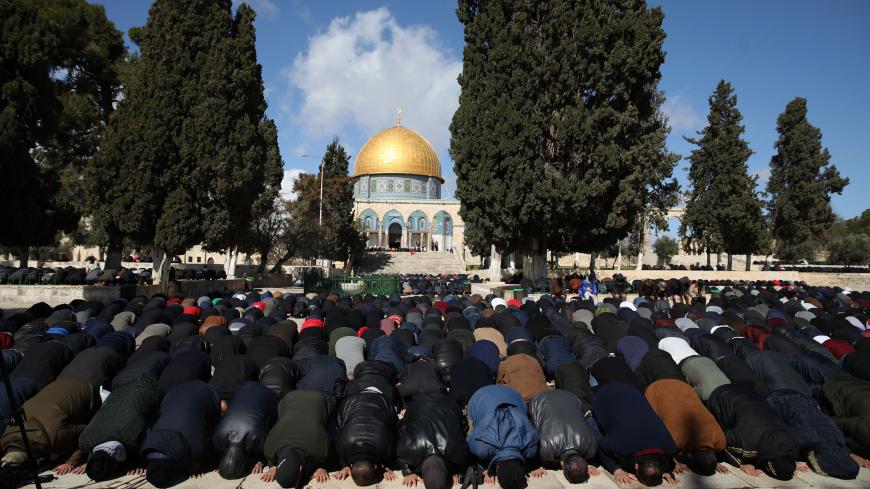 RAMALLAH, West Bank — Thousands of Palestinians have taken to the mosques in Jerusalem and the West Bank in protest against Washington’s Middle East plan, known as “the deal of the century,” and its proposed arrangement of opening up Al-Aqsa Mosque compound to the worship of all religions.

“Jerusalem’s holy sites should remain open and available for peaceful worshippers and tourists of all faiths. People of every faith should be permitted to pray on the Temple Mount/Haram al-Sharif, in a manner that is fully respectful to their religion, taking into account the times of each religion’s prayers and holidays, as well as other religious factors,” reads the 181-page plan, designed by Jared Kushner, US President Donald Trump's son-in-law.

According to the plan, the sovereignty of the area is granted to Israel, including the Christian and Muslim quarters and Al-Aqsa Mosque. Jews have been able to visit the site — known as the Temple Mount to Jews and Haram al-Sharif to Muslims — for more than a decade, but successive Israeli governments allowed only Muslims to pray there. The Trump peace plan allows for Jewish prayer on Haram al-Sharif, which would be an unacceptable change from the status quo, said Martin Indyk, a distinguished fellow at the Council on Foreign Relations, in his analysis in Foreign Affairs magazine.

As a reaction to the deal of the century and the ongoing Israeli attacks on mosques, the Palestinians initiated in November the Great Fajr Campaign, which draws thousands to early-morning "fajr," or dawn, prayers - the first of five daily prayers in Islam.

On Feb. 7, thousands of Palestinians performed the fajr prayers at Al-Aqsa Mosques in Jerusalem, despite the extensive deployment of Israeli police in the city, in response to the campaign. The Israeli police stormed Al-Aqsa Mosque compound, while policemen were deployed on the roofs of buildings. Dozens of military checkpoints appeared in Jerusalem’s streets and alleys. Buses carrying worshippers from inside the Green Line were stopped from access to Al-Aqsa.

On the same day, scores of Palestinians joined the prayers at the Ibrahimi Mosque in the Old City of Hebron, in the southern West Bank, and in other mosques in Nablus, Jenin nd cities in the northern West Bank.

Similar events have taken place the week before when more than 3,000 Palestinians participated in mass dawn prayers at the Ibrahimi Mosque and at the flashpoint Al-Aqsa Mosque compound on Jan. 31. The Israeli police stormed Al-Aqsa Mosque at the end of the prayers, attacking worshippers and wounding about 10 people with rubber bullets and arresting many.

“The collective dawn prayers started in Hebron's Ibrahimi Mosque in November, at the initiative of the city’s families and young activities who protest the Israeli incursions to the holy sites. Before long, several other families and citizens joined in as a reaction to the Israeli attempts to undermine the Palestinian presence and take over the mosque,” Hafzi Abu Sunainah, director of the Ibrahimi Mosque, told Al-Monitor.

He noted that the campaign soon spread to various mosques in the West Bank, including Al-Aqsa in Jerusalem, urging Palestinians to defend their holy sites that are constantly attacked by Israel.

In September 2019, Israeli Prime Minister Benjamin Netanyahu visited Hebron and entered the Tomb of the Patriarchs. Netanyahu also pledged in September to annex the settlement of Kiryat and the Jewish areas in Hebron, including the Ibrahimi Mosque.

“Al-Haram al-Ibrahimi is the heart of the city of Hebron and is under constant Israeli attack. This prompted the Palestinians to attend the mass dawn prayers, regardless of the cold and rain, the military checkpoints and the harassment by Israeli soldiers,” Abu Sunainah said.

The Ibrahimi Mosque was divided to accommodate Jewish worshippers following a 1994 massacre at the hands of a settler who murdered 29 Muslims — 45% of the mosque’s area was dedicated to Muslims and 55% to Jews.

On Jan. 10, Palestinians in Hebron went in droves to Al-Aqsa Mosque for the Friday dawn prayers, as they were urged by Jerusalemites, in response to a Jan. 2 attack by the Israeli police on worshippers at Bab al-Rahma (Gate of Mercy), the eastern gate of Al-Aqsa Mosque compound. The police used tear gas to disperse the crowd.

Madeleine Issa, an activist in her 20s from Kafr Qasim, performed the dawn prayer outside the door of the mosque compound on Jan. 31 for the second week in a row; she has been barred by the Israeli police from entering the mosque premises for three months per a Jan. 21 police order.

Issa told Al-Monitor that she travels from Kafr Qasim by bus to take part in the campaign every Friday. “The attacks on Al-Aqsa Mosque are no longer acceptable,” she said.

On Jan. 25, the Israeli police also stormed the house of former Grand Mufti of Jerusalem and head of the Supreme Islamic Council Ekrima Sabri and ordered him not to enter Al-Aqsa Mosque compound for four months. He was accused of inciting hatred against Israel during his Friday sermons.

The Israeli decision came after Sabri, who is seen as the highest Islamic figure in the city, defied a Jan. 19 Israeli police order barring him from visiting the mosque for one week. On Jan. 24, he entered the compound with dozens of worshippers who carried him on their shoulders.

“These large crowds joining the prayers should be seen all the time,” Sabri told Al-Monitor, saying that the campaign that made waves in the Islamic world is further evidence of the paramount importance of Al-Aqsa for Muslims. He said that the campaign has been exported to many Arab and Islamic countries.

“The mass dawn prayer is a message to the Israeli occupation of the importance of Al-Aqsa to us. The Israelis were upset by the large turnout at the mosque, which they seek to control and prevent Palestinian presence,” he added.

The campaign, which is expended to grow larger in the coming weeks, received political support from both the Palestinian Authority and Hamas.

“We support the Great Fajr Campaign in the face of the Israelis who fear the large Palestinian crowds during the dawn prayers. We urge all Palestinians to join hands at Al-Aqsa to protect it from the Judaization policies, along the lines of what happened at the Ibrahimi Mosque that was divided and turned into a synagogue,” Nayeb Jabour, a deputy for Hamas in the dissolved Palestinian Legislative Council, told Al-Monitor.

Adnan Ghaith, governor of Jerusalem and a member of Fatah’s Revolutionary Council, told Al-Monitor, “The deal of the century carries a clear threat to Jerusalem and its holy sites. The deal is a message for Jews to perform their prayers at Al-Aqsa and for the temporally and spatial division of the mosque.”

He added, “The Palestinians will not tolerate any undermining of Al-Aqsa and are capable of defending it, and the campaign is proof of that."