Doomsday averted on the Temple Mount, for now 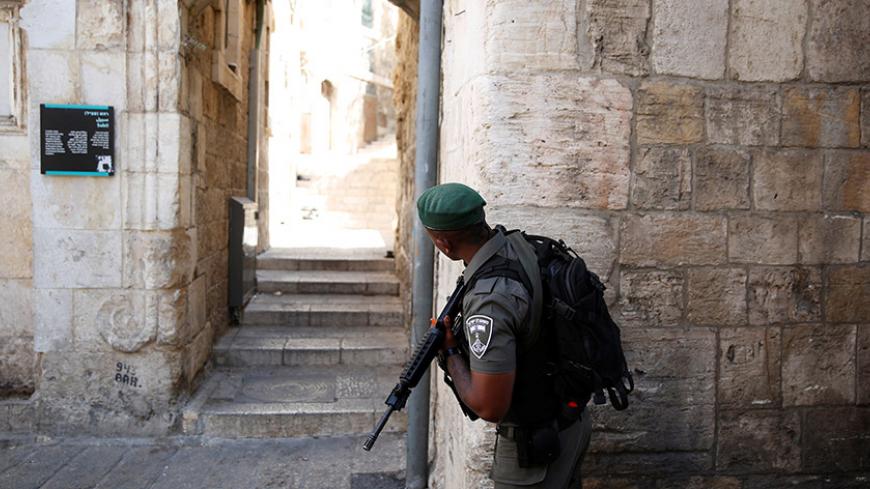 An Israeli Border Police officer stands guard next to an entrance leading to the compound Muslims call the Haram al-Sharif and Jews the Temple Mount, in Jerusalem's Old City, July 16, 2017. - REUTERS/Ronen Zvulun

There is no more horrifying scenario for Israel, and perhaps the entire Middle East, than a serious attack on the Temple Mount, which to Muslims is the Haram al-Sharif, site of Al-Aqsa Mosque. Such a scenario has been keeping Israeli defense officials awake at night since the 1967 Six-Day War, when Israel took control of the eastern part of Jerusalem. At 7 a.m. July 14, it looked as if that very scenario might unfold.

Three young Israeli Arabs from Umm al-Fahm burst into the compound, the third holiest site in Islam, armed with makeshift machine guns, a pistol and knives. As they made their way, they shot and killed two Border Patrol officers stationed at one of the entrances. Their plan was to seize control of Al-Aqsa and thereby ignite a huge conflagration in Jerusalem, and perhaps Israel, the West Bank and the entire Middle East. Fortunately, Border Patrol officers responded quickly, and after a brief chase through the square surrounding the mosques there, shot and killed the three attackers.

It was a brief incident, suppressed in a matter of minutes, but it was enough to send shock waves across Israel and the Palestinian territories. It forced Israeli Prime Minister Benjamin Netanyahu and Palestinian President Mahmoud Abbas to link arms and work together, despite their mutual loathing and current competition for support from the US administration. They were both committed to preventing a further deterioration in the situation or escalation, which could have left them both trapped by flames. Netanyahu called Abbas almost immediately to report what had happened and try to put an end to the rumors and fake news that tends to inundate social networks after such events. Abbas responded as Netanyahu had hoped, condemning the attack in unusually sharp terms.

The attack was not the nightmare scenario that truly terrifies Israel. In fact, the defense establishment has always been less concerned about a Muslim attack on the Temple Mount, since the Haram al-Sharif is sacred to them. What they really feared was an attack by an extremist Jew in an attempt to set the Middle East and the entire Muslim world on fire, laying the ground for the War of Armageddon between Islam and the Jews and ending with the arrival of the Messiah on his white donkey. Under this scenario, Al-Aqsa Mosque would be destroyed and the Third Temple rebuilt on its site of the original Temple.

Israeli security forces have prevented several such attacks over the years. Only limited numbers of Jews are now allowed on the Temple Mount. They are restricted to small groups, certain hours and can only visit after undergoing a thorough security clearance. Although the possibility that armed Muslims might storm the compound has been taken into consideration, it was never a high priority to which to prepare. Yet, that is exactly what happened. As a result of the attack, Israel made the rare move of closing the area to Muslim prayers through the following day.

The Temple Mount was reopened July 16 with new security measures in place. Metal detectors and X-ray machines were installed at the entrances for Muslims going to pray. Mufti of Jerusalem Mohammed Hussein and Waqf officials arriving that morning refused to enter the compound, contending that the introduction of metal detectors at the entrances constituted a significant Israeli violation of the status quo at the site.

According to the status quo agreement, dating back to 1967, the Waqf (guardian of Muslim holy sites), administered by Jordan, is responsible for prayer arrangements and management of the mosques in the compound. Israel keeps an eye on activities, but from a distance. Metal detectors slow the flow of people into the site, which in turn could delay prayers, the Waqf complained. With Israel trying to guard against a repeat attack, the metal detectors are still there, and only a trickle of people are going up to the mount. Muslims have voted with their feet, as crisis between Israel, Jordan, and the Waqf percolates.

The battle over who controls the Temple Mount has been raging behind the scenes for some time now. After all, the Gates of Hell in the Middle East could open at this very site. Officially, Israel controls the site and is responsible for security, but Israeli sovereignty is not implemented in the mosques themselves. Since the Israel Defense Forces conquered East Jerusalem, it has been Israeli policy not to intervene in affairs on the Haram al-Sharif and to allow the Waqf free rein in managing the site. That is why no Israeli flag flies over the mount.

For years, the Waqf has been controlled by Jordan. Israel considers Jordan to be an important regional ally, so it supports this arrangement. Nevertheless, the situation has been changing rapidly over the past few years. Turkey is now trying to buy influence and control over the Haram al-Sharif, and radical Islamic groups, in particular Salafis, are establishing a presence to exert pressure there, such as through the Mourabitoun activists. In fact, these days everyone seems to have their hands in something there. All this exacerbates Israel's biggest security headache.

At least two conflicts over procedures on the Temple Mount have occurred in the last two years. One of these was connected to the eruption of violence in the occupied territories in September 2015 and the other flared in April 2016. What really intensifies tensions now is the demand by religious Jews to visit the area, considered the holiest site in Judaism. Until just a decade ago, most rabbis prohibited Jews from ascending the mount for religious purposes. More recently, however, quite a few rabbis affiliated with religious Zionism have permitted their followers to visit. This has resulted in a huge wave of Jews trying to get there any way they can, which drives Muslim paranoia.

In the previous two conflicts surrounding the Temple Mount, the US administration under President Barack Obama played a dramatic role in restoring calm. Secretary of State John Kerry engaged in shuttle diplomacy between Jerusalem and Amman and spent dozens more hours on the phone until calm was restored, and the situation returned to its pre-crisis state. In both instances, Netanyahu was persuaded to inform Jordan's King Abdullah II that Israel will maintain the status quo down to the very last detail.

No one in Washington is being kept up to speed on the current state of affairs. Kerry has retired, and Secretary of State Rex Tillerson is more interested in Iran and the Persian Gulf. Furthermore, there is no way the Americans will so much as dip their finger into the powder keg atop the most important plateau in the world. Meanwhile, Israel, the Palestinians, the Waqf, Jordan, the Turks and the Salafis are all playing this dangerous game on their own, making the situation more perilous than ever.