While Jordan and Israel are keen to preserve the peace treaty and maintain top intelligence and security coordination, the issue of Al-Aqsa Mosque remains a potential deal breaker. 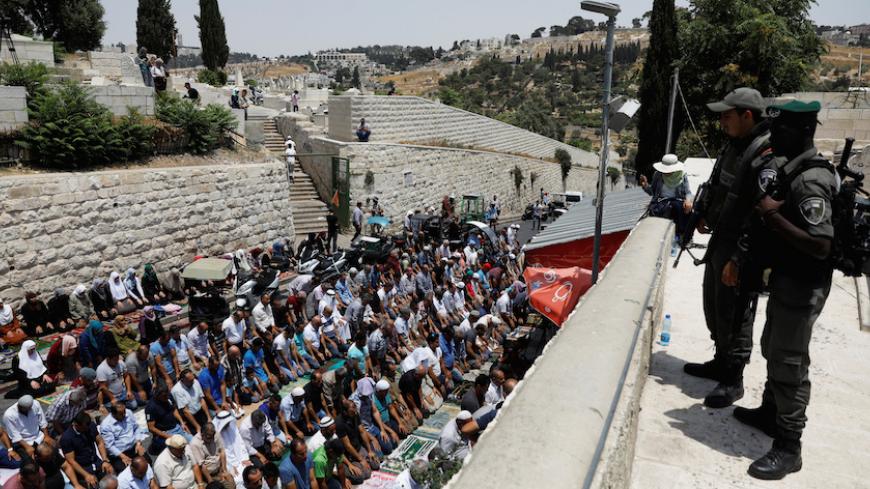 Israeli border police officers stand guard as Palestinians pray at Lions' Gate, the entrance to Jerusalem's Old City, in protest over Israel's new security measures at the compound housing Al-Aqsa mosque, known to Muslims as the Noble Sanctuary (Haram al-Sharif) and to Jews as the Temple Mount, July 20, 2017. - REUTERS/Ronen Zvulun

Anyone following Jordanian reaction to Israeli measures imposed at the Haram al-Sharif (which Israel calls The Temple Mount) in the Old City of Jerusalem following the deadly July 14 attack could be forgiven for thinking that Jordan and Israel were still at war. Israel closed the compound that includes Al-Aqsa Mosque, Islam’s third holiest shrine, preventing prayer there after three Arab-Israelis opened fire on Israeli guards near a gate leading to the shrine. Two policemen were killed before the assailants were shot dead. It was the first time that Israeli authorities had closed the compound since 1969, triggering angry reactions on both sides of the Jordan River.

Jordan’s official reaction was swift. The same day, its communications minister and government spokesman Mohammed al-Momani said that while Amman continues to condemn violence, it will not accept any violation of Muslims' rights to observe their religious rituals at their holy places. He urged Israel to "immediately" reopen Al-Aqsa Mosque to worshippers and cautioned Israel against making any moves to change the existing situation at the site and in Jerusalem in general.

Israel was quick to denounce the Jordanian position. An Israeli official said in a July 14 interview, “Instead of condemning the attack, Jordan chose to attack Israel, which is protecting worshipers and maintaining freedom of worship at the place. Israel will not tolerate any harm to the holy sites and it maintains the status quo there. It should be expected that all sides involved, including Jordan, exercise restraint and avoid fanning the flames.”

Jordanians took the streets July 14 and 15 in Amman and across the kingdom declaring support for Al-Aqsa, condemning the occupation and praising the July 14 “martyrs.”

Jordan’s Minister of Awqaf and Islamic Affairs Wael Arabiyyat warned against “unprecedented Israeli violations and provocations against Al-Aqsa.” In a statement carried by the official news agency July 16, Arabiyyat said Jordan rejects Israeli measures to close the mosque to worshippers under any circumstances. Foreign Minister Ayman al-Safadi called on Israel in a July 16 press statement to defuse the crisis and warned against further escalation that cannot be contained.

According to Israeli press reports, Israel was further outraged by a July 16 statement by Atef al-Tarawneh, the speaker of the lower house, in which he praised the “martyrs” and blamed the Israeli occupation for the violence, adding that its “threats against the Haram al-Sharif will inspire resistance until the oldest occupation in modern times comes to an end.”

That statement pushed his Israeli counterpart, Knesset speaker Yuli Edelstein, to tell Tarawneh to “shut up.” In a July 17 press release, Edelstein said, “It is unthinkable that such a senior figure in a country with which we have a peace agreement would encourage the murder of Israeli citizens.”

King Abdullah called Israeli Prime Minister Benjamin Netanyahu on July 15, stating his condemnation of the Jerusalem attack and rejection of violence. He urged the Israeli prime minister to reopen the mosque and reiterated Jordan’s strong stance against the closure.

Palestinian President Mahmoud Abbas called Netanyahu on the day of the attack to condemn it and urged him to reopen the compound. Netanyahu assured Abbas that Israel was not about to change the status quo at the holy site.

Netanyahu announced July 16 that Israel would partially reopen the compound, but the crisis was about to get worse. Palestinian worshippers had attempted to break the Israeli siege, resulting in clashes with Israeli security guards July 17 and 18. And when Israel finally lifted the blockade, worshippers discovered that they had to pass through metal detectors in order to reach the compound. The Waqf Directorate, which is administered by Jordan under the 1994 peace treaty, accused Israel of breaching the sovereignty of the Haram al-Sharif.

The imam of Al-Aqsa Mosque, Ikrama Sabri, called on worshippers across Jerusalem to “head to Al-Aqsa and show their support” July 21. With tension rising in the holy city, Jordanians are also expected to march in protest and solidarity the same day following Friday prayers.

Jordan has not officially clarified its position on Israel’s installation of metal detectors at the entrance of the Haram al-Sharif. But on July 19, Safadi told EU ambassadors in Amman that Israel must “respect the historical and legal status at Al-Aqsa Mosque" and end attempts to create "new realities on the ground in a direct breach of its commitment as an occupying power.”