The entire Israeli Embassy staff was evacuated from Jordan after a guard shot and killed two Jordanians following a dispute on embassy grounds. 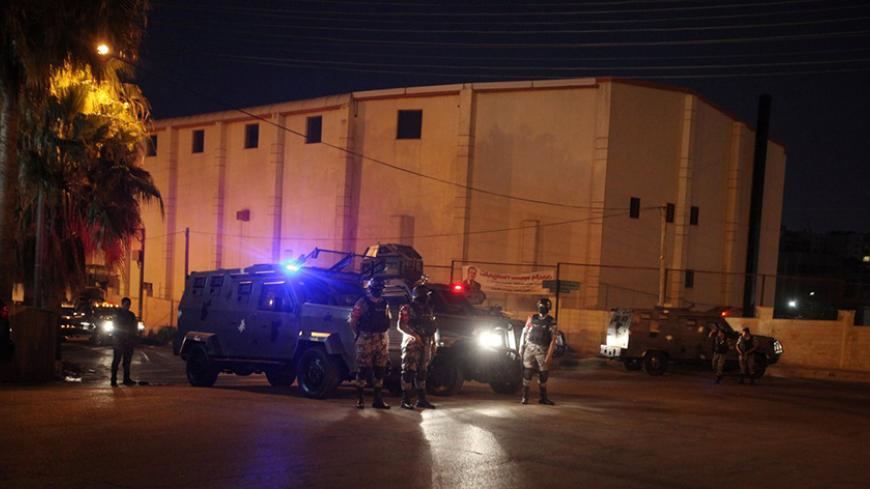 Two days after an Israeli Embassy guard shot and killed two Jordanians on July 23 in what appeared to be an argument over the installation of bedroom furniture at the assailant’s apartment, a talk-show guest on Jordan’s government-run TV station described Israel as “the usurper Zionist entity." Public acrimony against Israel has transcended even the usual scorn often directed at the Jewish state that one can hear on private TV and radio stations and read on social media platforms and local news websites.

Anti-Israel rhetoric had been building up since a crisis at Haram al-Sharif in occupied East Jerusalem erupted on July 14 following a deadly shooting in the compound. Israel’s two-day closure of Al-Aqsa Mosque, an event that last occurred in 1969, and its subsequent installing of metal detectors at the gates of the holy compound, had enraged Palestinians but also infuriated Jordanians, almost half of whom have Palestinian roots.

Repeated interventions by senior Jordanian officials, including King Abdullah himself, had failed to dislodge Israeli Prime Minister Benjamin Netanyahu’s position. Clashes in the Old City of Jerusalem between angry Palestinians and Israeli soldiers had continued on a daily basis since July 21, when Jordan’s administered Waqf (endowment) Department — which is responsible for Muslim shrines in East Jerusalem — refused to enter the compound until Israel had removed the metal detectors and all other restrictions. By July 23, at least three Palestinians and three Israeli settlers were killed in separate incidents.

Jordan’s efforts to resolve the crisis in Jerusalem seemed ineffective. Israeli actions were seen as driven by hard-line ministers in Netanyahu’s government who contested Jordan’s special role in overseeing Muslim shrines in Haram al-Sharif and were pushing to allow Jewish prayers at Al-Aqsa Mosque, which is also sacred to Jews, who call it the Temple Mount.

But then the Israeli Embassy compound incident took place. It was an unexpected turn of events that jolted governments in Jordan and Israel. Jordanian security cordoned off the embassy and prevented its staff, including the assailant, from leaving. Despite his diplomatic immunity, Amman insisted on interrogating the Israeli security guard, later identified only as Ziv.

What happened over the following 24 hours remains unclear, and both governments have given little details. But it seems, according to Israeli sources, that Netanyahu had called on the Trump administration for help, having failed to contact Abdullah, who was in the United States on a private visit. According to the Israeli media, Trump’s son-in-law, Jared Kushner, intervened and contacted the Jordanian monarch. Late in the evening on July 24, the entire Israeli Embassy staff was evacuated from Jordan. Jordanian sources said that the staff was allowed to leave after hearing the testimony of the Israeli security guard. No other details were given.

Also that evening, Jordan’s media reported that Abdullah and Netanyahu had spoken on the phone and discussed ways to defuse the crisis at Al-Aqsa. And much later that evening, Israel announced that its security Cabinet had decided to remove the metal detectors at the entrance of Haram al-Sharif.

The release of the Israeli Embassy staff enraged Jordanians across the kingdom. Twitter and Facebook were alight with insults against Israel and criticism of the Jordanian government’s handling of the affair. Local websites attacked the government for bowing down to Israel and letting the killer go free. Few accepted the government’s version that a Jordanian youth, 17-year-old Mohammad Jawawdeh, had attacked the Israeli diplomat with a screwdriver, and many questioned the mysterious circumstances surrounding the killing of the second man — Jordanian physician Bashar Hamarneh, who was also the assailant’s landlord.

Thousands of Jordanians joined the July 25 funeral of Jawawdeh, whose family originally came from Hebron in the West Bank. They chanted “Death to Israel” and “We are martyrs for Al-Aqsa.” On the same day, three government ministers held a press conference with Foreign Minister Ayman Safadi, insisting that there was no deal with Israel or a quid pro quo between the release of the Israeli Embassy staff and the removal of metal detectors at Al-Aqsa. He also said Jordan, which had to abide by international law regarding diplomatic immunity, will pursue legal steps against the Israeli assailant in Israel.

But the Jordanian public was not satisfied. Parliament members demanded the closure of the Israeli Embassy and the recalling of Jordan’s ambassador in Tel Aviv. They accused the government of gross negligence and failing to provide a convincing narrative.

There was further disdain for Netanyahu’s public welcome of Ziv as a hero once he returned to Israel. While tension over Al-Aqsa may have subsided for now, relations between Israel and Jordan are tinder dry. There have been serious confrontations, primarily over Al-Aqsa, between the two since the signing of the peace treaty 23 years ago, but this seems to be the gravest so far. The pressure is not only on Netanyahu to save his job, salvage his far-right coalition and rescue relations with Jordan, but it is equally heavy on the Jordanian government, which must be true to its word in pursuing legal action against Ziv for killing the two Jordanians.

Upon his return to Jordan on July 27, the king visited Jawawdeh’s family to offer his condolences. He also presided over the meeting of the National Policies Council, which usually convenes during national crises. He said the Jordanian state will dedicate all of its resources to bringing justice to the deceased. He called on Netanyahu to rise to his responsibility and take legal steps “to put the killer on trial instead of dealing with this crime in a manner of political showmanship for personal political gains.” He also said that the way Israel will treat the embassy affair and the killing of Judge Raed Zeiter in 2014 will impact the future of bilateral ties.

On the same day, Al-Ghad daily reported that the public attorney’s office has charged Ziv with murder and that since the assailant has diplomatic immunity the case will be followed by the Ministry of Foreign Affairs to bring charges against him in his own country.

The king’s angry but unyielding statements and his visit to the condolence house of one of the victims (he is expected to pay a similar visit to the family of the slain physician) will be welcomed by Jordanians who felt insulted and provoked by Netanyahu’s actions and their own government’s perceived mishandling. But with the clashes at Al-Aqsa erupting again on July 27, Jordanian-Israeli relations will take a turn for the worse for many weeks and maybe months to come.