Jordan and Israel are on a collision course once again and Jerusalem remains at the heart of the crisis. 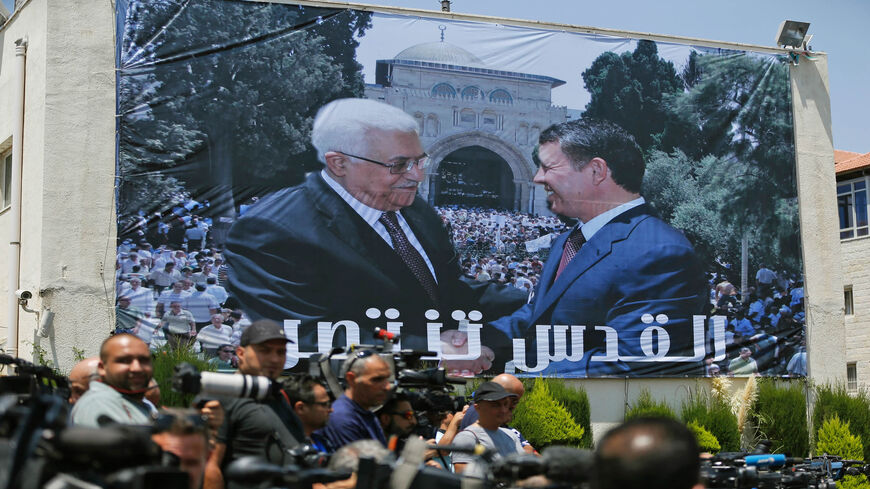 A photo montage of Jordan's King Abdullah (R) and Palestinian President Mahmoud Abbas shaking hands in front of Al-Aqsa Mosque compound is seen on a building during a welcome ceremony of the Jordanian king in Ramallah, West Bank, Aug. 7, 2017. - Abbas Momani/AFP via Getty Images

Jordan is intensifying diplomatic efforts to restore calm in occupied East Jerusalem as it finds itself once more on a collision course with Israel, in particular over the status of Al-Aqsa Mosque compound (Haram al-Sharif, or what Israelis call Temple Mount). On May 10, Foreign Minister Ayman Safadi met with his US counterpart, Antony Blinken, at the State Department discussing the serious conditions in the city of Jerusalem and the efforts aimed at stopping the escalation in the occupied Palestinian territories, according to local media quoting Jordan’s Foreign Ministry. Safadi reiterated that “Jerusalem was a red line” for Jordan, and that the focus now is on stopping the escalation. For that to happen, all illegal and provocative Israeli practices against Palestinian citizens of the Sheikh Jarrah neighborhood and the violations at Al-Aqsa must stop.

Jordan found itself at the center of Israeli-provoked crises in East Jerusalem that were triggered at the beginning of the holy month of Ramadan. The first began when Israeli authorities provoked Palestinians at the Old City’s Damascus Gate, when they set up barricades to prevent Arab residents from congregating at Al-Aqsa. This led to clashes that turned violent and lasted for two weeks before Israel removed the barricades. Then another crisis erupted when Israel allowed Jewish settlers to breach the East Jerusalem Arab neighborhood of Sheikh Jarrah, where Jewish groups claim to have property rights and are demanding the eviction of at least four Palestinian families from their homes.

While world attention turned to the plight of Palestinian residents of the neighborhood, Jordan’s reaction was muted. It took Safadi more than two weeks to react to the Sheikh Jarrah crisis. On May 7, he tweeted, “Palestinians threatened with eviction in Sheikh Jarrah are the rightful owners of their homes as documents provided by Jordan to PNA [Palestinian National Authority] and homeowners prove beyond doubt. As the occupying power, Israel is legally responsible for ensuring these ownership rights are protected.”

But that was before the unprovoked attack by Israeli forces on Muslim worshippers on the evening of May 8, the holiest night of Ramadan, at Al-Aqsa Mosque. On May 9, Israeli forces breached the compound, firing stun grenades and tear gas canisters at worshippers. Israeli soldiers forced their way into the mosque and attacked people inside. Scores of Palestinians were injured and many arrested. On May 10, Israeli soldiers raided the compound again and confiscated the keys to the main gates of the mosque.

Not since 2000 — when then-Likud leader Ariel Sharon made a controversial visit to the compound, triggering what became known as the second intifada — did Jordan, as custodian of Haram al-Sharif, face such a dire challenge to its special role. Jordan and Israel had sparred over Jewish breaches of the compound over the past decade, but this time the objective of challenging King Abdullah’s custodianship was clear. Jordan had rejected past attempts to allow Jewish settlers to pray inside the mosque. In November 2014, US Secretary of State John Kerry mediated between Jordan and Israel and both sides agreed to maintain the status quo at Al-Aqsa. But under Israeli Prime Minister Benyamin Netanyahu, Jewish settlers were allowed to enter the compound under Israeli security protection.

Palestinian residents of East Jerusalem had staged protests May 10 against a planned event by Jewish extremists, marking Jerusalem unification day, who were planning to march through the Old City and head toward Al-Aqsa. Under international and US pressure, the march was finally canceled to avert further violence.

King Abdullah has been in touch with regional leaders to recruit support for Jordan’s position. In a telephone call May 10 with Turkish President Recep Tayyip Erdogan, the king stressed that the Israeli authorities’ continued disregard of international calls to cease violations against Al-Aqsa and Jerusalemites constitutes a violation of international law and international humanitarian law, according to a Royal Court statement.

But pundits here believe the latest crises at both Al-Aqsa and in the Sheikh Jarrah neighborhood present a direct threat to Jordan’s national security. Hassan Barrari Ajarmeh, professor of international relations at Qatar University, told Al-Monitor that Jordan can do little to prevent the far-right Israeli political establishment from challenging its role at Al-Aqsa. “The peace treaty [between Jordan and Israel] speaks of a ‘special role’ for Jordan over Muslim holy sites in East Jerusalem, and there is no mention of the word custodianship,” he said. “Jordan alone cannot protect Muslim sites in Jerusalem, and it is a matter of time before extremist Israeli governments make another assault on Al-Aqsa. What will we do then?”

Ajarmeh noted that the Sheikh Jarrah case underlines Israel’s basic objective to “displace” and later “transfer” the city’s Arab population. “This is ethnic cleansing pure and simple. The final objective for Israel is to keep the land and transfer the people to Jordan under the so-called ‘Jordan is Palestine’ mantra of the Israeli far-right,” he said.

Political commentator Labib Kamhawi said that Jordan’s official reaction via the foreign minister over the current crisis has exposed Jordan’s limited options in facing Israeli threats. He told Al-Monitor that the minister had reduced the East Jerusalem issue to worshippers’ access to Al-Aqsa Mosque while ignoring the larger picture that concerns the deliberate and systemic forced eviction of Arab residents and the daily violations of their rights in East Jerusalem.

“The rights of the residents of Sheikh Jarrah are guaranteed by the Jordanian government that had an agreement with UNRWA to settle Palestinian refugee families in the area after 1948. The Jordanian government should be at the forefront of defending these peoples’ rights. By the same token if Jewish groups claim they have deeds to houses in Sheikh Jarrah millions of Palestinians still have deeds to their properties in West Jerusalem and inside Israel proper,” he said.

Kamhawi added, “Jordan’s main concern appears to be to preserve its custodianship role and nothing else. The only path is diplomacy, which is getting eroded by growing Israeli disregard for the kingdom. Safadi keeps saying that Jerusalem is a red line, but what can Jordan do if Israel goes ahead and forces a new reality at Al-Aqsa?”

One thing that emerged out of the recent crisis is Jordanians' solidarity with the Palestinians and their deep-seated rejection of official ties to Israel. Chanting, “Expel the ambassador” and “Down with the Wadi Araba [peace] treaty,” hundreds of Jordanians rallied near the Israeli Embassy in Amman for the second day May 10 in support of Al-Aqsa and Palestinian steadfastness.

Meanwhile, pundits here are asking what Jordan can do next time Israel attacks Al-Aqsa in a direct affront to Jordan and its special role there. “It’s only a matter of time before something similar happens and by then diplomacy alone will not help,” Ajarmeh concluded.