A bill before the Israeli Knesset would allow Jewish prayer at the Al-Aqsa mosque compound and, if passed, inflame Israel-Jordan tensions. 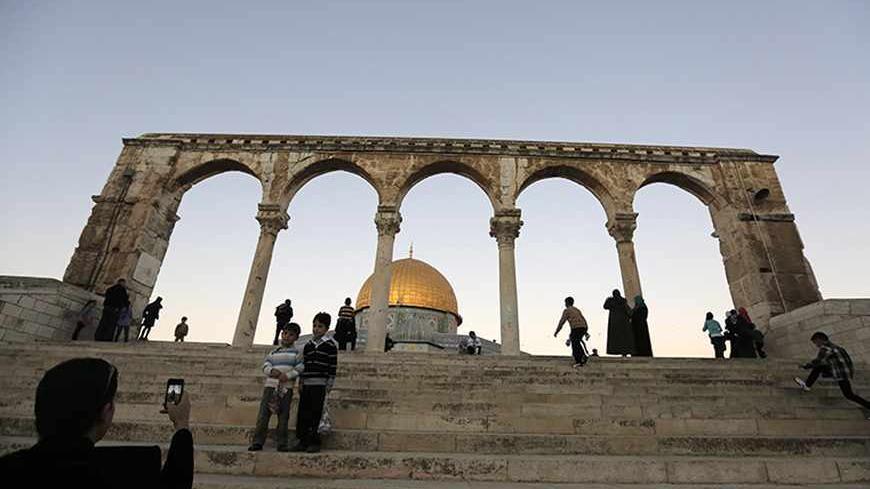 Palestinian children have their picture taken in front of the Dome of the Rock on the compound known to Muslims as al-Haram al-Sharif and to Jews as Temple Mount in Jerusalem's Old City, on the first day of Eid al-Adha, Oct. 15, 2013. - REUTERS/Ammar Awad

Jordanian-Israeli ties, always under pressure, could be heading for trouble if the Knesset approves a controversial bill to divide Al-Aqsa mosque compound in east Jerusalem, allowing Jews to pray in the Muslim compound. The bill was drafted by Israeli Deputy Minister for Religious Affairs Rabbi Eli Ben Dahan and was rejected by Arab Knesset members, who warned that if passed, the law could lead to the eruption of a third intifada.

On Tuesday, Nov. 12, the Jordan Times reported that Amman had rejected a request by Israeli authorities to allow Jewish prayer at Al-Aqsa mosque compound. It quoted Abdul Nasser Nasser, the Jordanian adviser for Islamic and Christian religious affairs in Jerusalem, as saying, "Jordanian officials have refused an Israeli request to allow Jewish prayer stretching from the ablution fountain to the main door to Al-Aqsa mosque."

Under the peace treaty between Jordan and Israel, the former maintains a special supervisory role over Muslim and Christian holy sites in east Jerusalem, occupied by Israel since the 1967 war. Although Jordan severed legal and administrative ties with the West Bank in 1988, it preserved the role of the Ministry of Religious Affairs in east Jerusalem. The Hashemite kings of Jordan had always claimed a special affinity to Jerusalem's holy sites starting from King Abdullah I, who was assassinated while visiting Al-Aqsa in 1951, to the late King Hussein. King Abdullah II had restated the role of the Hashemites in Jerusalem, and in March of this year, Palestinian Authority President Mahmoud Abbas reaffirmed the king's mandate over the city's holy sites, giving him the legal means to defend them.

Since the signing of the peace treaty between Jordan and Israel in 1994, the latter had respected Amman's special role in east Jerusalem, but tension between the two rose a number of times over Israeli excavations near the walls and under the foundations of Al-Aqsa. Ultra-conservative and right-wing Israelis believe the ancient mosque, one of three holiest shrines for Muslims, stands over the remains of the Temple of Solomon. In fact, the main square where the mosque stands today, called the Holy Sanctuary by Muslims, is known to Israel as the Temple Mount.

Jordan has repeatedly criticized Israeli archaeological works near the foundations of Al-Aqsa mosque. On a few occasions, the Israeli authorities have suspended such works. But in recent months Jewish settlers, under the protection of soldiers, had toured the main square of Al-Aqsa, raising fears that the right-wing government of Prime Minister Benjamin Netanyahu is sympathetic to their demands for access.

Speaking to Al-Monitor, Jordan Minister of Religious Affairs Hail Abdel Hafiz Dowood said if the Knesset approves the controversial bill, it will affect stability in the entire region. He added that Jordan will never relinquish its historic role in supervising religious sites in Jerusalem, and it can never condone attempts to divide Al-Aqsa mosque compound.

Jordanian and Palestinian officials have warned that tampering with Al-Aqsa's status will ignite a third intifada. The second Palestinian uprising, also called Al-Aqsa Intifada, was triggered by a provocative visit to the mosque's main square by then-Likud Party leader Ariel Sharon in September 2000. The uprising led to the breakdown of peace negotiations and the reoccupation by Israel of territory under the control of the Palestinian Authority.

Ironically, US Secretary of State John Kerry also warned Israel Nov. 7 that failure to reach a peace agreement with the Palestinians may ignite a third intifada. Frustration over Israeli settlement expansion in east Jerusalem and the West Bank and the threats to Al-Aqsa mosque compound have reached a dangerous level. Jordan supports Palestinian demands for a two-state solution with east Jerusalem as the capital of the state of Palestine. But Amman knows that the future of east Jerusalem will be a major obstacle to reaching a deal.

A change in the status of Al-Aqsa mosque compound would be a direct affront to Jordan and to Abdullah II personally. Such a move could threaten the peace treaty between the two. The last time bilateral relations were put to the test was when Mossad agents tried to assassinate Hamas leader Khaled Meshaal in Amman in 1997, when Netanyahu was prime minister. After the Israeli bill was introduced, 20 Jordan deputies presented a motion to suspend the peace treaty with Israel if the status of Al-Aqsa mosque compound is changed.

The head of the Jerusalem file at the lower house of parliament, Deputy Itaiwee Al Majali, told Al-Monitor that if the Knesset approves the bill, Israel will be in breach of both the peace treaty with Jordan and the Oslo agreements. He said if Al-Aqsa is divided between Muslims and Jews, then the Jordanian parliament will vote to abrogate the peace treaty.

Islamist leader Ishaq Al Farhan, a former Jordan government minister and current leading advocate of Muslim rights in east Jerusalem, told Al-Monitor that Israeli threats to Al-Aqsa were not new and that they are part of a plan to Judaize the holy city. An Israeli zealot was accused of attempting to burn Al-Aqsa in 1968. Jordan has restored the mosque repeatedly since then.

It was recently reported that Jordan will send a high-level delegation to Israel to state Amman's position on current threats to Al-Aqsa. So far, the king has not commented directly on the proposed bill, but he did describe previous Israeli unilateral moves in east Jerusalem as "playing with fire."

For years, relations between Jordan and Israel have been stable, coming under pressure only when peace talks with the Palestinians floundered. This episode over Al-Aqsa may bring such relations to a new low. The general mood in Amman is apprehensive and Jordanian officials are taking Israeli threats seriously.