In an exclusive interview with Al-Monitor, Azzam al-Khatib, head of the Islamic Endowments in Jerusalem, criticized all Arab states, except for Jordan, for their inaction on Israeli violations of the mosque area. 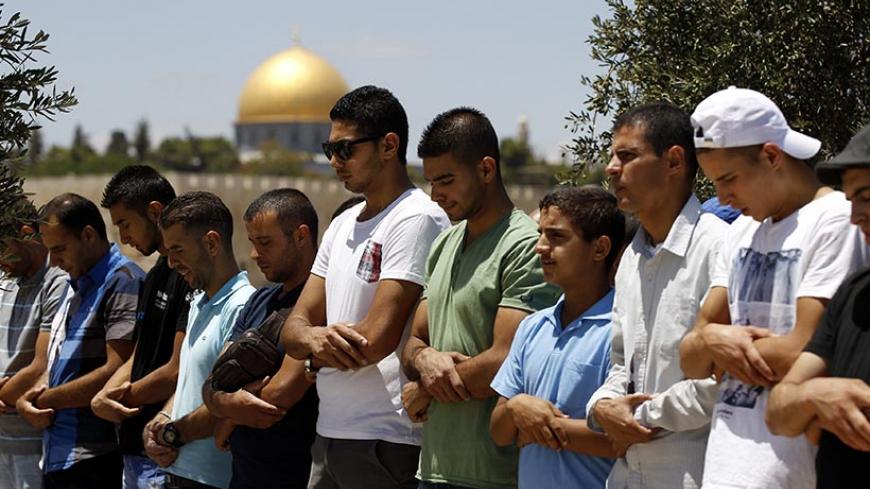 The Dome of the Rock is seen in the background as Palestinians pray in Jerusalem, July 18, 2014. - REUTERS/Ammar Awad 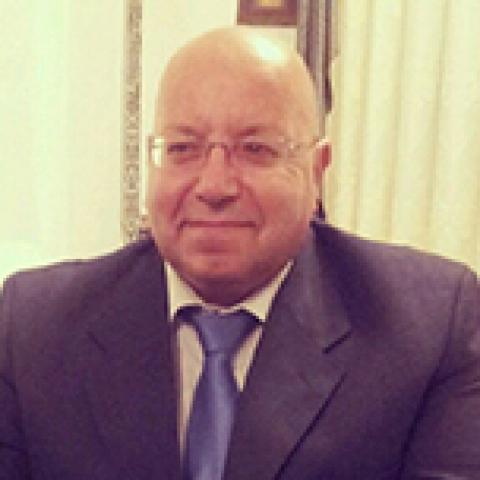 JERUSALEM — If Israel attacks Al-Aqsa Mosque, it will lead to a new uprising, warned Azzam al-Khatib, director of the Islamic Waqf (Religious Endowment) and Al-Aqsa Affairs in Jerusalem.

“Muslims will not allow any attack on Al-Aqsa Mosque, whether from inside or outside,” he said.

In an interview with Al-Monitor, Khatib said calls had been made to Israeli parties to return the tourism file to the Endowments organization after Israel took control of tourism to the mosque in 2000.

Jordanian King Abdullah II, who is responsible for the mosque, also received reassurances from Israeli Prime Minister Benjamin Netanyahu that nothing would change in Al-Aqsa, according to Khatib.

“Jordan is playing an effective role by overseeing the Muslim and Christian sanctities and managing the Endowments and their properties in Jerusalem,” he said.

Tension has escalated over Al-Aqsa with Palestinian and Jordanian concerns that Israel is increasingly allowing Jewish extremists to enter the mosque area, disrupting prayer services. Some speculate about an Israeli agenda to take control of the mosque.

Khatib said, “We are not against the entry of non-Muslims into Al-Aqsa, but we are against those who enter it and say this is their temple. Those are our enemies and the enemies of the Jews themselves.”

He also accused Arab states of neglecting Al-Aqsa Mosque, calling for them to at least throw their support behind Jordan’s role.

“All Arab countries are neglecting it, and we only have a relationship with Jordan, which funds the financial matters. All what we are asking of the Arab nation is to support Jordan's position in the city of Jerusalem in terms of its protection of Islamic holy sites and sponsorship of these sanctuaries,” he said.

Al-Monitor:  Media reports suggest that Jordan is secretly discussing with Israel ways to appease the situation in Al-Aqsa. What progress has been made?

Khatib:  Everybody knows that there are Jordanian calls with Israel. The Organization of Muslim Endowments is in contact with the Ministry of Religious Endowments and official Jordanian parties regarding the developments in Al-Aqsa Mosque. King Abdullah II is personally aware of all the developments in Al-Aqsa and Jerusalem, which interest the king, the government and all the Jordanian people. Any repercussions in Jerusalem would ripple in the Jordanian streets. During the month of Ramadan, major problems were caused by Israelis in Al-Aqsa mosque. Jordan was aware of this, and the king intervened. After having closed the doors of Al-Aqsa for a long time and not allowing women to enter, they were reopened and women were allowed inside again. Israeli Prime Minister Benjamin Netanyahu officially promised that the situation in Al-Aqsa has not changed. He also personally clarified to the Jordanian government, according to what the minister of endowments published in the Jordanian Ad-Dustour newspaper a few days ago, that they demanded an official explanation of what is going on in Al-Aqsa from Netanyahu personally. The latter indeed said that nothing has changed and that the Jordanian Hashemite Kingdom still protects Al-Aqsa.

Al-Monitor:  What do you think of the Jordanian role?

Khatib:  I believe that the role played by Jordan in Jerusalem is the most important, especially in Al-Aqsa Mosque. If it weren’t for it, God forbid, the situation would have been much worse in the mosque. Jordan is playing an effective role by overseeing the Muslim and Christian sanctities and managing the Endowments and their properties in Jerusalem. More than half of Jerusalem is under Hashemite care. That’s why Jordan has a major role, which has been perfectly sustained.

Al-Monitor:  The Islamic Religious Endowments has been facing many challenges perpetrated by Israel. Can we say that they have lost part of their role in protecting Al-Aqsa due to Israeli measures?

Khatib:  It is true that there are Israeli obstacles in the way of the Islamic Religious Endowments organization, especially when it comes to some of its projects in Al-Aqsa — in addition to breaking-and-entering operations by Jewish extremists. An exceptional situation prevails these days in Al-Aqsa due to the numerous extremists who enter the mosque. We have also lost the tourism file through our own fault. Moreover, allowing many extremists to enter the mosque mainly contributed to the deterioration of the situation in Al-Aqsa. Israel’s control over Mughrabi Gate opened the door for it to make unilateral decisions and allow extremists to enter without coordinating with the Islamic Endowments. This was the organization’s fault when in 2000, former Prime Minister Ariel Sharon broke into Al-Aqsa Mosque. Sovereignty was supposed to remain in the hands of the Endowments, but circumstances changed due to personal or other initiatives. Still, I blame the decision-makers at the time for not reopening the door to tourism to the Islamic Endowments.

Al-Monitor:  What is the estimated budget of the Islamic Endowments? How much of that budget does Jordan finance?

Khatib:  Jordan fully funds the Endowments. It gives us everything we need. We have around 650 employees. A few days ago, I personally asked the king for an official letter to appoint 50 guards. He responded immediately, and ads were published in local papers to appoint these guards. All the salaries are provided by Amman. The Jordanian Ministry of Endowments pays around 10 million dinars [$14.1 million] from its budget as salaries. The projects of the king, including the reconstruction ones, are covered by the Hashemite fund, which is managed by Prince Ghazi and personally overseen by the king. The projects are estimated in millions and they are known to the public. The mosque has never seen such projects throughout its entire history and since its establishment.

Al-Monitor:  There have been recent attempts on the part of the Knesset to pass a series of laws affecting the role of religious endowments. How do you think this will affect your organization?

Khatib:  The Israeli government has frankly explained to Jordan that no decision will apply to Al-Aqsa Mosque and that the status quo established since 1967 will remain respected. But there are some right-wing extremists, such as Chairwoman of the Knesset Interior Committee Miri Regev and Knesset member Moshe Feiglin, who are trying to make decisions in the committee. They, however, have failed to do so thus far, and the issues are still pending in the Knesset. There are some ministers, such as Yuri Ariel, trying to disrupt the work of the government, the police and even the Islamic Endowments in making these decisions, but so far no decision has been issued regarding Al-Aqsa Mosque except for those issued by the Supreme Court of Justice in 1982 and 1987. However, no decision has been implemented against Al-Aqsa Mosque. There is information according to which the Israeli police will not allow any Jewish extremist to perform any Talmudic prayers in Al-Aqsa, and will not allow any temporal or space division. This will never happen.

Al-Monitor:  But why are we seeing Jewish extremists performing religious rites in Al-Aqsa?

Khatib:  We are only witnessing Jewish extremists taking tours under police protection in Al-Aqsa Mosque.

Al-Monitor:  Back to the subject of tourism in Al-Aqsa. How can the Endowments restore this dossier?

Khatib:  There have been calls with Israeli parties regarding tourism to restore its previous status, before Aug. 28, 2000, when it was still under the control of the Endowments, which welcomes everyone to the mosque. However, if any changes occur and tourism is used as a cover to allow extremists to enter Al-Aqsa with the approval of the Endowments, then restoring the status will not happen.

Al-Monitor:  Do you think that controlling the tourism sector is very important for the Endowments to restore its control over Al-Aqsa entirely?

Khatib:  At least restoring part of the control of the Endowments to allow the entrance of tourists and Jews to the mosque. We are not against the entry of non-Muslims into Al-Aqsa, but we are against those who enter it and say this is their temple. Those are our enemies and the enemies of the Jews themselves.

Al-Monitor:  Do you think that the Arab countries are neglecting Al-Aqsa?

Khatib:  All Arab countries are neglecting it, and we only have a relationship with Jordan, which funds the financial matters. All what we are asking of the Arab nation is to support Jordan's position in the city of Jerusalem in terms of its protection of Islamic holy sites and sponsorship of these sanctuaries. We also hope that the Arab and Islamic nation will seriously support Jordan to protect these sanctuaries.

Al-Monitor:  Do you think that some Arab countries are directly intervening in Al-Aqsa through civil institutions in Jerusalem?

Khatib:  Nobody is interfering in Al-Aqsa, and we will not allow anyone to interfere to protect the mosque and the Islamic Endowments organization. The Arab nation is well aware of an official and legitimate way to help through Jordan. We do not accept any financial donations except through the Hashemite fund for the sake of the Endowments and its official affairs. I forbid Israel from interfering in this.

Al-Monitor:  What are the consequences of any Israeli attack on Al-Aqsa Mosque?