With Israel's daily incursions into the Al-Aqsa Mosque compound, Jordan's King Abdullah may have no choice but to press for diplomatic sanctions, threatening 20 years of peace between the two countries. 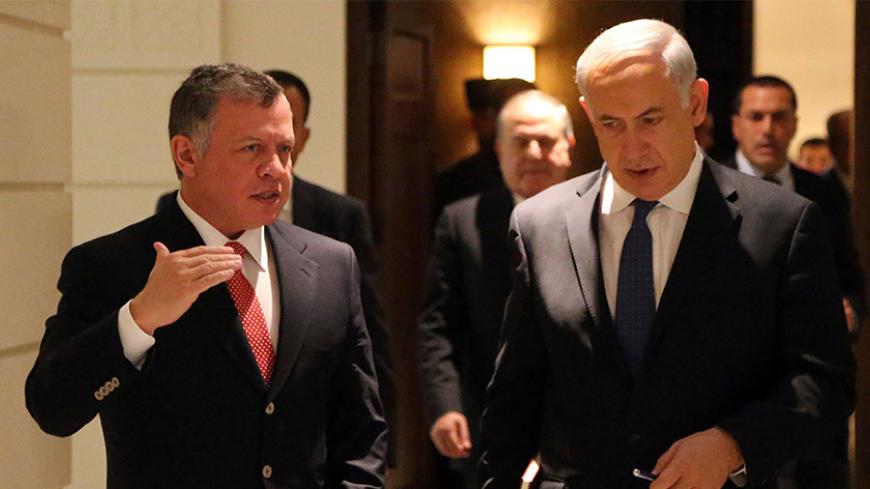 Jordan’s King Abdullah is waging an unprecedented diplomatic offensive against Israel following a week of daily incursions into the Al-Aqsa Mosque compound by Jewish settlers under the protection of heavily armed Israeli police. On Sept. 14, the king said, “Any more provocations in Jerusalem will affect the relationship between Jordan and Israel, and Jordan will have no choice but to take action.” His statement came in the wake of what the government in Amman described as “provocations and attacks” following clashes between Palestinian worshippers and Israeli police on Sept. 13, which injured more than 20 Arabs and resulted in damage to a small mosque adjacent to Al-Aqsa.

But the incursions continued in spite of Jordan's protests, heightening tensions between Amman and Tel Aviv and threatening the 20-year-old peace treaty between the two countries. Under the peace accord, Israel recognized Jordan’s special role in administering and protecting Muslim holy sites in East Jerusalem and vowed not to change the status quo. King Abdullah, like his father, King Hussein, has been keen on presenting himself as a custodian of Al-Aqsa Mosque. In the view of most Jordanians, any attack on the mosque is an affront to the king and the role of the Hashemite family in East Jerusalem.

The latest Israeli provocations in what Israelis call the Temple Mount are seen as a breach of personal commitments that Prime Minister Benjamin Netanyahu made to the king last November in the presence of US Secretary of State John Kerry. Netanyahu pledged in the Amman meeting not to change the status quo of Al-Aqsa Mosque and to respect Jordan’s administrative role over Muslim holy places in East Jerusalem.

Reports say that Netanyahu has sent messages of reassurance to Amman since the king issued his warning. Despite this, the incursions continued until Sept. 17. Pundits in Jordan believe the recent attacks — which have been condemned by the Palestinian Authority and a number of Arab countries — are meant to prepare for a right-wing Israeli scheme to allow Jewish worshippers into the mosque. Non-Muslims are permitted to visit the compound but not to enter the mosque itself.

Former Jordanian Prime Minister Taher al-Masri told Al-Monitor that what is happening now in Jerusalem is part of a public Israeli policy to “Judaize the city and empty it of its Arab residents.” Masri said Israel is making good use of the fact that the Arabs are busy with their own problems and the Palestinian problem is no longer a priority. “The endgame is to take over Al-Aqsa completely and turn it into a Jewish temple as many Israeli extremists are saying,” he said.

Masri said that Jordan cannot stop these incursions by itself. “Amman will take strong diplomatic steps against Israel, but Arabs and Muslims must realize that protecting Al-Aqsa is their responsibility as well,” he said.

Since he issued his warning, King Abdullah has made a number of calls with regional and world leaders, including US Vice President Joe Biden and Egyptian President Abdel Fattah al-Sisi, urging them to intervene. But observers here are asking what else Jordan can do? The head of the Center for Strategic Studies at the University of Jordan, Mousa Ishtaiwi, told Al-Monitor, “Israel has no respect for its peace treaty with Jordan and is taking the kingdom for granted. This is why the relationship has always been tense due to continued Israeli provocations.” Ishtaiwi said that Jordan will not go to war with Israel, but the king will use his extensive contacts, especially in the United States, to put pressure on Netanyahu. “What I can tell you is that the cold peace with Israel will get colder,” he said.

The press in Jordan has reported the king’s warning and his latest diplomatic moves, but there has been little public reaction. On Sept. 16, deputies and professional union representatives staged a sit-in and called on the government to expel the Israeli ambassador, sever diplomatic ties with Israel and suspend the peace treaty. Few believe that Jordan will do anything that might threaten its peace agreement with Israel.

But if Israel continues its provocations or allows Jewish worshippers to enter the mosque, then Amman will find itself in a difficult position.

Islamist columnist Yasser Zaatra agreed. He told Al-Monitor that Jordan should prepare for the worst-case scenario. “Israel will go ahead with plans to allow access to Al-Aqsa because of what that means to Jewish extremists,” he said. “But I don’t believe that diplomacy will work this time. We should prepare for a new intifada [similar to the one in September 2000], because this is the only language that Israel understands,” Zaatra said. But he added that the Palestinians’ worst enemy is their leadership, which will not permit the eruption of a new intifada.

For now, King Abdullah is limiting his response to building international pressure on the Netanyahu government to stop its provocations. But if the incursions continue, he will be forced to adopt drastic actions. In the view of Masri, the king is considering all options seriously.