Jordan king fends off critics of IS war, holds firm on Al-Aqsa

Jordan’s King Abdullah is facing increased domestic criticism, primarily from Islamists, over his handling of Israel’s incursions into Al-Aqsa Mosque and the US-led war on the Islamic State. 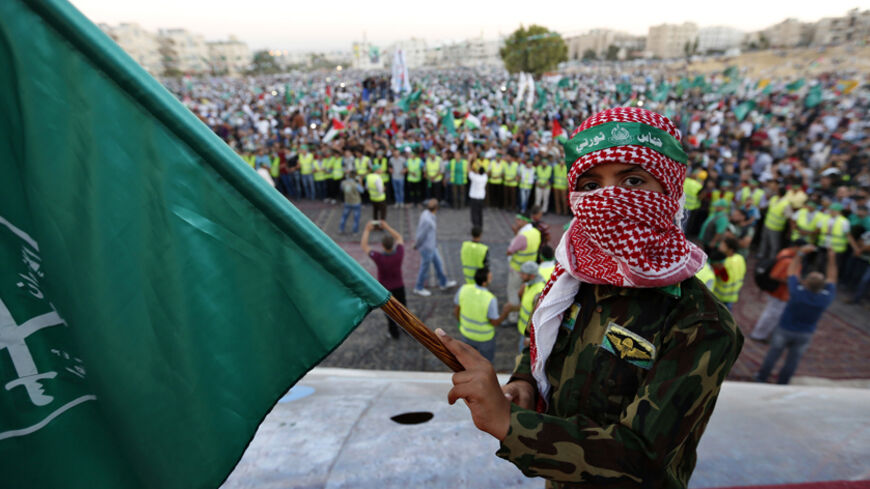 A boy holds a Muslim Brotherhood flag during a rally in support of Palestinians in the Gaza Strip, in Amman, Aug. 8, 2014. - REUTERS/Muhammad Hamed

The regime in Jordan is facing increasing domestic pressure over its involvement in the international war against the Islamic State (IS) in Iraq and Syria, on the one hand, and on Israel’s repeated incursions into Al-Aqsa Mosque in East Jerusalem on the other. The Islamist movement in the kingdom had criticized Jordan’s decision to join the United States and other Arab and Western countries in the war to destroy IS. The Muslim Brotherhood, the main opposition group in the country, declared through its political arm the Islamic Action Front (IAF) in September that "this was not our war," as did other moderate Islamist figures.

But the biggest denunciation came from Abu Mohammad al-Maqdisi, the spiritual leader of the Salafist jihadist movement in Jordan. A few days after condemning Jordan’s participation in the international coalition, he was arrested by the authorities for using the Internet to promote radical views. He had published an article on Oct. 27 calling on IS and Jabhat al-Nusra “to unite against the US-led alliance.”

The internal debate over the risks entailed in joining the fight against IS coincided with repeated incursions by Jewish extremists at Al-Aqsa compound in the Old City of Jerusalem. Under the Israeli-Jordanian peace treaty, signed in 1994, Jordan maintains a special role as custodian of the holy Muslim sites in East Jerusalem. Palestinian President Mahmoud Abbas recognized that role as well last year. For decades, the Hashemite kings of Jordan were seen as protectors of Al-Aqsa Mosque. With repeated incursions, Jordan issued warnings to Israel against violations of the peace treaty and changing the status of the mosque. Jewish extremists want to have access to the Muslim shrine, which they call the Temple Mount, and some have openly called for demolishing it to build a Jewish temple in its place.

Diplomatic contacts between Jordan and Israel have failed to defuse tensions, as both countries marked the 20th anniversary of the bilateral treaty. Despite assurances by Israeli Prime Minister Benjamin Netanyahu that the status of the mosque will not change and news of a secret meeting between him and King Abdullah in Amman on Nov. 1, Jordan withdrew its ambassador to Tel Aviv in protest and threatened to take the case to the UN Security Council.

In response to Israeli attacks on Al-Aqsa, local political parties called on Jordan to take action, including the termination of the peace treaty. Jordanian officials said that continued Israeli provocations in Jerusalem will threaten peace between the two countries. But in spite of Israeli official assurances, tension over Al-Aqsa continued to mar bilateral relations. On Nov. 9, Prime Minister Abdullah Ensour told reporters that Abdullah was “extremely angry” over Israeli policies in Jerusalem adding that Jordan believes Israel is bent on changing the present conditions in the Old City. He was responding to calls by demonstrators, led by Islamists, on Nov. 7, who asked the government “to arm the people” and “allow jihad in Palestine.”

During these demonstrations, which took place across the kingdom, leader of the Muslim Brotherhood Hammam Said said, “Our fight is in Jerusalem and not in Iraq or Syria or anywhere else.” He called on the government to expel the Israeli ambassador and tear down its embassy in Amman.

But Abdullah, in a stern speech at the Jordanian parliament on Nov. 2, responded to critics, especially Islamists, of Jordan’s participation in the war against IS by saying, “Our religious and humanitarian duty demands that we confront with strength and firmness all those who try to instigate sectarian wars or distort the image of Islam and Muslims.” He added, “The war on these terrorist organizations and their radical ideology is our war because we are targeted and we must defend ourselves, Islam and the values of tolerance and moderation by fighting extremism and terrorists.”

Responding to the Islamist groups that stood against Jordan’s role in the anti-IS coalition, the king said, “Everyone who supports this extremist takfiri ideology or tries to justify it is an enemy of Islam.” Observers believe this was a direct response to controversial statements made by senior IAF official Naim al-Khasawneh, on Oct. 22, when he said, “There is no choice for moderates and those who reject the US international war on Islam but to support IS.”

Political analyst Fahd al-Khitan told Al-Monitor that the king’s speech has left the door open on the future role of the Jordanian army “beyond Jordan’s borders.” He said that such a scenario “terrifies Jordanians because of unimaginable risks.”

Still, the king has managed to woo Jordanians with his remarks on Oct. 27, where he said, “Radicalism is not the embodiment of Islam but a phenomenon that exists in all religions and ideologies, including Zionism.” Speaking to parliamentarians, the king made the bold move of equating Islamic extremism with “Zionist extremism,” adding that “stakeholders should acknowledge there is extremism in all camps.”

For now, it appears that the king has managed to silence critics of Jordan’s role in the anti-IS coalition. The security organs are keeping a close eye on Salafist jihadist sympathizers of IS, although the threat of reprisals has not receded as the country marked the annual anniversary of the bloody Amman bombings in 2005.

On the other hand, tensions are high over repeated Israeli provocations at Al-Aqsa Mosque and in East Jerusalem and the West Bank. While revoking the peace treaty with Israel is not a viable option, the authorities, aware of rising domestic pressure, are ready to escalate and resort to available legal and political routes.