Jordanian King Abdullah hopes Israel understands the serious message he is sending by recalling Jordan's ambassador due to escalations at Al-Aqsa Mosque. 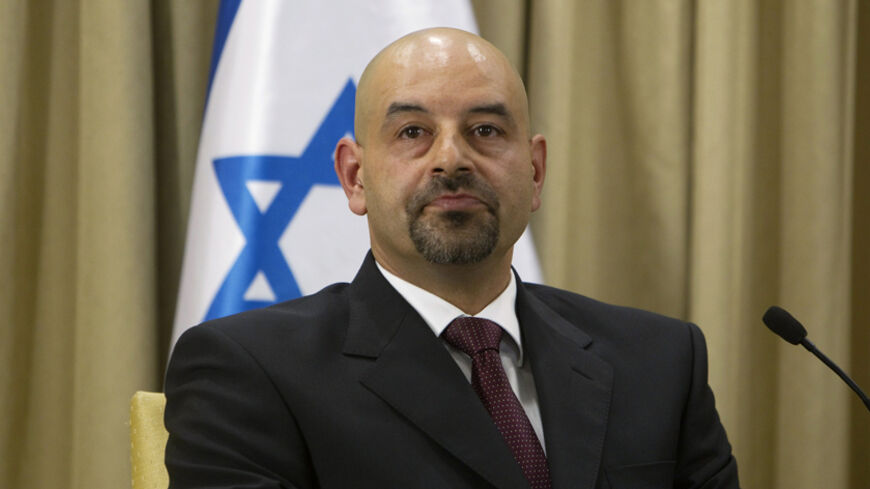 Jordan's ambassador to Israel, Walid Obeidat, sits with Israel's President Shimon Peres (not seen) after presenting him with his credentials in Jerusalem, Oct. 17, 2012. -

Jordan’s ambassador to Israel, Walid Obeidat, received warm applause on Oct. 28 while giving a speech in Tel Aviv on relations between his country and Israel. “This 20th year of the peace treaty has witnessed the advancement of major projects that ultimately serve the advancement of bilateral and regional interests,” said the ambassador. Obeidat, speaking two decades after Jordan and Israel signed a peace treaty, also referenced recent agreements on water and gas between the two countries. Yet, Jordan’s national media paid little attention to these aspects of the speech, instead stressing the Jordanian ambassador's slamming of Israel for its settlement policies in East Jerusalem.

The Jordanian diplomat, who refused to heed the opposition of his own tribe, was lonely in the Israeli coastal city. He was the only acting Arab ambassador in Israel. Egypt recalled its envoy to Cairo in 2011 following the Israeli shooting of three Egyptian border security officers. He has not returned since.

Obeidat had survived the breakdown of Palestinian-Israeli talks, the sharp increase in Jewish settlement activities, the killing of a Jordanian judge on the King Hussein Bridge (for which a joint investigation has yet to produce results) and the 51-day brutal Israeli war on Gaza. And, despite repeated calls from parliamentarians, civil society activists and a weekly vigil held every Thursday, diplomatic relations have remained normal.

On that day, Jordanian Prime Minister Abdullah Ensour recalled Jordan’s ambassador in Tel Aviv. The recall did not follow any specific protest call or petitions, and most likely occurred upon the advice of the palace. Jordan, a member of the UN Security Council, will also table a complaint to discuss the Israeli actions in Jerusalem, specifically at Haram al-Sharif, which includes the Dome of the Rock and Al-Aqsa Mosque.

In March, angry public calls to suspend diplomatic relations over the judge's killing led to a failed vote of confidence. Yet, King Abdullah and his government refused to recall their ambassador, expel the Israeli ambassador or abrogate the peace treaty with Israel.

Following the recent recall decision, callers to Jordanian radio stations stated the obvious. “Why did we wait so long?” asked Thaer, who called into Amman's Radio al-Balad. Another caller, Ziad, also questioned the delay. He cited an Arab proverb mocking those “going to Mecca while the pilgrims are returning from the hajj."

A senior source in the Jordanian Foreign Ministry explained to Al-Monitor the difference in reactions during the war on Gaza and recent events at Al-Aqsa Mosque. “As much as we were unhappy with Israeli actions in Gaza, this was a Palestinian issue that was being dealt with by the Palestinian government,” he said. “We were happy to give them the support they needed, and we used our diplomatic relations with Israel to press for an end to the violence and to allow humanitarian aid into Gaza.” The source preferred not to be identified because his boss, Foreign Minister Nasser Judeh, was out of town.

The Jordan Hashemite Charity Organization has been the only Arab aid organization able to dispatch hundreds of trucks carrying food and medicine to the embattled Gaza Strip.

Marwan Muasher, Jordan’s first ambassador to Israel and former foreign minister, told Al-Monitor that Jordan's response was rare. “Jordanian officials' statements about the issue have been exceptionally harsh, which speaks to the extent of Israeli actions and the frustration Jordan feels because of it,” he said. Muasher, who is currently vice president for studies at the Carnegie Endowment for International Peace, cautioned that “Israel should take such statements very seriously.”

King Abdullah is said to be the 43rd direct descendant of the Prophet Muhammad, so the issue of custodianship over Al-Aqsa Mosque is a personal matter. Jordan’s media often refer to the issue as the "Hashemite," rather than Jordanian, custodianship.

The issue is even more sensitive these days as Jordan is an active member of the US-led coalition against the radical Islamic State militants. As one radio caller said after the recall decision: “We can’t be in a coalition against an Islamic extremist group while being quiet about the Israeli soldiers and extremists desecrating the third holiest mosque in Islam in Jerusalem.”

The details of the recent private meetings between King Abdullah and Israeli Prime Minister Benjamin Netanyahu are still unknown. The Kuwaiti daily Al-Jarida revealed that the Israeli and Jordanian leaders met privately on Nov. 1 to talk about the crisis in Jerusalem and the need for immediate calm. Netanyahu has gone on the record stating that there are no changes to the status quo at Al-Aqsa, though he did make a public appeal for calm. But the Nov. 5 violence by Israeli police inside the mosque itself reflects a clear escalation — the crossing of a red line that must have triggered Jordan's sharp reaction.

In his speech in Tel Aviv, Obeidat made clear where the red line was drawn. He talked about Jewish radicals’ continuing desire to enter and pray on the grounds of the holy mosque and Israeli reluctance to stop them. “If allowed to continue, it will ultimately imperil the [Jordan-Israel] treaty, adversely affect peace efforts and regional stability, fuel tension and feed extremism,” the ambassador warned.

The recall of the ambassador for consultation might be a small step, but Jordanian officials and the king hope it will send a clear message. Otherwise, Amman will have little option but to escalate the situation even further, thus putting the peace treaty in real jeopardy.