Tensions are mounting between Jordan and Israel after the latter arrested members of the Islamic Waqf Council for entering a supposedly banned prayer room at Al-Aqsa Mosque. 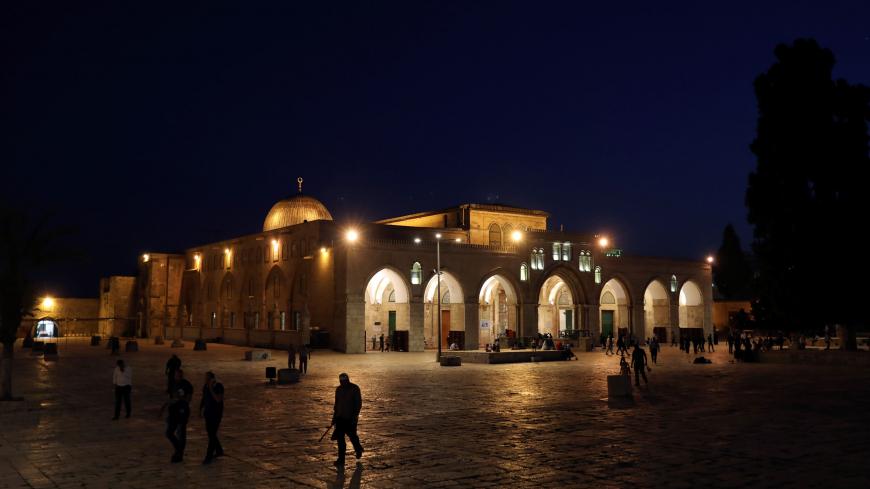 Visitors walk past al-Aqsa Mosque at night on the compound known to Muslims as al-Haram al-Sharif and to Jews as Temple Mount, in Jerusalem's Old City, May 9, 2017. - REUTERS/Ammar Awad

Al-Aqsa Mosque is again causing a major rift in the once friendly relationship between Jordan and Israel. Relations turned sour in the past week when Israeli security officials conducted a humiliating arrest of Jordan’s most senior official in Jerusalem. Heavily armed Israeli security forces arrived at the East Jerusalem home of Sheikh Abdul Azim Salhab at 5:30 a.m. on Feb. 24. Salhab’s deputy and a score of other employees of the Jordanian Ministry of Awqaf were also taken away, as were leading Palestinian activists.

The Israeli police said the arrests were made because Salhab, 75, and hundreds of Muslims broke an Israeli imposed ban forbidding Palestinians from entering or praying at the Bab al-Rahmeh prayer room in the mosque. They called the protest act a “change in the status quo.”

The prayer room on the eastern side of the UNESCO World Heritage Site was ordered closed in 2003. The newly appointed and expanded Islamic Waqf Council had made a symbolic protest move Feb. 14 by entering and praying at the site.

Israel responded by putting chains on the door — a move that resulted in daily protests and brought Muslim worshippers to pray outside the banned location. On Feb. 22, hundreds of Muslims led by the Waqf Council entered the site and held Friday prayer there, which infuriated the Israelis, especially the radical Jewish groups that have been trying to reclaim the mosque saying that the location used to contain a Jewish temple thousands of years ago.

Wasfi Kailani, director of the Royal Hashemite Fund for the Restoration of Al-Aqsa, told Al-Monitor that the original 2003 ban was made after a group headed by Sheikh Raed Salah used the site. “The ban in 2003 was an arbitrary military decision taken without any attempt to respect the rights of Muslims to pray in their own mosque. Besides, Sheikh Salah, who lives in the Israeli town of Umm al-Fahm, has not set foot in Al-Aqsa for about 12 years due to Israeli bans.”

Since 2003, Jordan has requested every year that the site be reopened, but the Jordanian requests were summarily dismissed. At the time, Israel said it closed this location because it was used by Salah and the Turath (Heritage) Islamic Committee dedicated to defending Al-Aqsa Mosque. Salah, a charismatic leader belonging to the Islamic Movement in the north of Israel, has been regularly barred by Israeli courts from setting foot in Al-Aqsa Mosque saying he was inciting violence. Salah is now under town arrest inside Israel.

The arrest of Salhab caught the attention of Jordan. The Jordanian parliament, government and even the small Jordanian Evangelical Council all issued strong statements of condemnation.

Jordanian Awqaf Ministry lawyers, who are usually reluctant to use the Israeli courts to resolve such diplomatic issues, were forced to defend the head of the council in court. Within hours of the arrests, as the sheikh was brought in for an arraignment in court and in the presence of the Awqaf lawyers, it became clear that the supposed 16-year-old military order banning prayer at the Bab al-Rahmeh room does not exist. It is not clear if there ever was an order or if it had simply elapsed over the years.

The Israeli Court of First Instance ordered on the same day, Feb. 24, the release of the sheikh and all others who had been arrested for that reason on condition that they stay away from the mosque for seven days. A quick attempt by the Israelis to appeal the Lower Court decision was rejected and the Waqf officials were released the day of their arrest.

Saeb Erekat, secretary-general of the PLO's Executive Committee, told Al-Monitor that relations with Jordan are very close. "We have a very close relationship with Jordan in many aspects, the most important being our coordination in order to protect Jerusalem from the Israeli policies of colonization, including attempts at changing the status quo."

The secretary-general of the Palestinian Authority's Islamic-Christian Council for Jerusalem and the Holy Places, Hanna Issa, told Al-Monitor that Jordan’s leadership in reinstituting a council provided Jerusalemites the courage to stand up. “The efforts of His Majesty the King was evident in the reopening of Bab al-Rahmeh gate because it gave Jerusalemites the bravery to stand up with their bare chest to the Israeli occupiers.”

Issa said that the Jordanians have been carrying out their duties as custodians since 1924 and have been enforcing the Palestinian-Jordanian agreement signed in 2013 guaranteeing that Christian and Muslim holy places fall under the Jordanian custodianship.

Khaled Abu Arafeh, Jerusalem minister in the Hamas-led government in 2006, told Al-Monitor that the situation had evolved over the years as the popular sentiment in Jerusalem had risen and forced officials to take responsibility. “The new Waqf Council reacted, the Jordanian government was unhappy with the repeated Israeli violation of agreements and all sides were keen not to leave the scene as heroic Jerusalemites stood up for their rights.”

Ofer Zalzberg, a senior analyst with the International Crisis Group and an expert on Jerusalem affairs, told Al-Monitor that Palestinian elation with what happened and Jordan’s role is matched by Israeli frustration. “Jordan's assertive participation in confronting Israeli restrictive measures at Al-Aqsa Mosque is matched by a sense of frustration in the Israeli prime minister’s office from the way in which the Holy Esplanade [Esplanade is a neutral reference to the site of Haram al-Sharif/Al-Aqsa Mosque] crisis reveals the low point in Israeli-Jordanian relations writ large,” he said.

Zalzberg argued that “although the king is pleased with the domestic popular support for Amman's recent role at Al-Aqsa, at the same time he seeks a way to restore the delicate balance between Jordanian-Palestinian and Jordanian-Israeli relations.”

Issa Kassissieh, the Palestinian ambassador to the Vatican and member of the PLO’s Higher Church Council, told Al-Monitor that Jordanians and Palestinians are working closely with each other. “What we saw in the last weeks of coordination at the highest level to challenge attempts against Haram al-Sharif — including the addition of well-respected Jerusalem figures to the Waqf Council — are signs of this unique relationship that will ensure the protection of Bab al-Rahmeh and the rest of the mosque as well as its living stones.”

What transpired in Jerusalem’s Old City over the past two weeks has shown again the tremendous value of “people power” and the importance of leadership. But now that the genie is out of the bottle and the people of Jerusalem are aware of their rights to the entire 144 dunams (35.5 acres) that constitute Haram al-Sharif/Al-Aqsa Mosque, it will be next to impossible to reverse things. And as the saying goes, you can’t put the toothpaste back into the tube.