An Israeli court has temporarily closed an embattled Al-Aqsa site in an effort to relieve the simmering tension there and pressure Jordan into engaging with it. 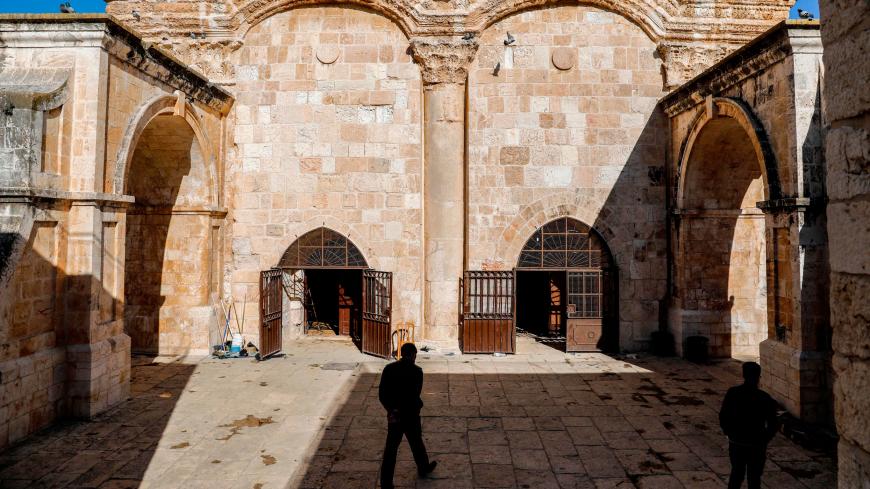 A Palestinian Muslim walks toward the Golden Gate at Al-Aqsa Mosque in the Old City of Jerusalem, March 17, 2019. - AHMAD GHARABLI/AFP/Getty Images

The Israeli courts have been brought into the ongoing pre-election tensions over access to a site within Al-Haram al-Sharif/Al-Aqsa Mosque. The Israeli prosecution has asked the courts to help resolve the conflict that has left the Old City of Jerusalem in constant tension ever since Muslim worshipers decided they are not obliged to accept the unilateral Israeli ban on using the site.

Since the newly appointed and expanded Islamic Waqf Council held prayers at Bab al-Rahmeh on Feb. 14, the issue of who has the right to use the location — which lies within the UNESCO World Heritage site — has been a source of controversy.

Israeli political and security officials have been battling with worshipers who insist on their right to use the facility as they see fit. Israel claims that turning the site into a mosque is a violation of the status quo.

The Israeli government petitioned the Jerusalem Magistrate’s Court to issue an interim injunction closing the site. In the court's ruling approving the closure of Bab al-Rahmeh, Judge Dorit Feinstein wrote that the site may only be used with prior coordination with Israeli security.

The March 17 decision gave the Islamic Waqf Council 60 days to respond before the temporary closure becomes permanent. No details justifying the decision were made public. Most of the deliberations were held behind closed doors. Israeli courts have often accepted information from the security authorities that is not made public.

Jordan, which administers Islam’s third holiest site, has refused since 1967 to recognize the jurisdiction of Israeli courts on the rights of Muslims to their own mosque in Jerusalem. Jordan’s top official on this matter, Wasfi Kailani, told Al-Monitor that Jordan and the Islamic Waqf Council will not respond to an illegal occupational system even if they're confident they would win the case.

Kailani, director of the Royal Hashemite Fund for the Restoration of Al-Aqsa, gave two reasons for Jordan’s refusal to engage Israel’s courts: “International law states that all Israeli post-1967 legislation and actions in East Jerusalem are null and void and must be rescinded.” He added that according to Sharia, “The mosque can never be under a non-Muslim law/court system.”

Kailani argued, “If Israel is truly keen to preserve the status quo, freedom of worship and respect of its treaty with Jordan, it must not follow the agenda of extremist Jews who announced their aggressive plan to occupy Bab al-Rahmeh and convert it into a synagogue.”

Israeli courts are supposed to give the injured party in a decision sufficient time to prepare a rebuttal to its interim decisions. Sources told Al-Monitor that the 60 days are also meant to allow the situation to calm as well as bypass the upcoming Israeli elections.

But Ofer Zalzberg, a senior analyst with the International Crisis Group who specializes in Jerusalem issues, told Al-Monitor that the court’s 60-day window has invited pressures from radical Israeli activists on this issue. He believes that these elements are using the election season to pressure the sitting government to act against the Waqf Council.

“The Regavim movement [a pro-settler Israeli NGO] petitioned the Israeli High Court of Justice asking that it instruct the prime minister, the police commissioner, the attorney general and the Israel Antiquities Authority to take all possible measures against the Waqf’s illegal takeover of the Bab al-Rahmeh area and prevent it from establishing a mosque there,” Zalzberg said.

Khaled Abu Arafeh, former minister of Jerusalem for the Palestinian Authority, told Al-Monitor that the Israelis are approaching a dead end and trying to buy time for the popular uprising Jerusalem to fade. “They are coordinating between the courts and the prosecutors on one hand and on the other, they are trying to reach a political understanding with Jordan, which has the legitimate custodianship over religious sites in Jerusalem, with the aim of provoking the Waqf Council into engaging with them in the courts.”

Abu Arafeh said that Israel has very few options. “They can continue arresting activists and keep them away while giving open opportunities to extremists, but these efforts will not succeed.”

Daniel Seidmann, an Israeli lawyer working in Jerusalem, told Al-Monitor that the Israeli government typically hides behind the court and the court hides behind government. “No one wants to be responsible for making a decision or its consequences.”

Seidmann said that the lack of communication between the leaders of Israel and Jordan and the absence of US brokerage has forced both sides to harden their positions. “The courts have tried to defer a decision until after the April 9 elections with the hope that cool heads will prevail. But until then, we are on a collision course. Israel is in a defiant mood before the elections that are so crucial for Netanyahu, and the youth of Jerusalem have been empowered and will not give in. We are dealing with a ticking bomb that can blow up any minute.”

The last time Jordan’s King Abdullah and Netanyahu held talks was in July 2017, Jordanian and Israelis sources confirmed to Al-Monitor.

Hanna Issa, the secretary general of the Palestinian Authority's Islamic-Christian Council for Jerusalem and the Holy Places, told Al-Monitor that the Israeli court decision is a “violation” of the rights of Muslims to their mosque. “Al-Aqsa Mosque is for Muslims alone and they have the right to all of its locations, mosques and prayer areas.”

By shifting from intimidation of Islamic leaders and activists to using the courts to justify their actions, the Israeli authorities are clearly trying to appease right-wing elements in Israel. These extremists understand the vulnerability of Netanyahu, who is in the fight for his political life. Netanyahu needs to win at any cost to deal with his corruption indictments from a strong position. But any misstep in this closure could blow up into a major confrontation that would be difficult to control, regardless of the timing of the Israeli elections.