Jerusalemites have publicly welcomed the new Islamic Waqf Council as a leadership vehicle that will allow them to forge ahead with a clear and implementable strategy for Jerusalem and its holy places. 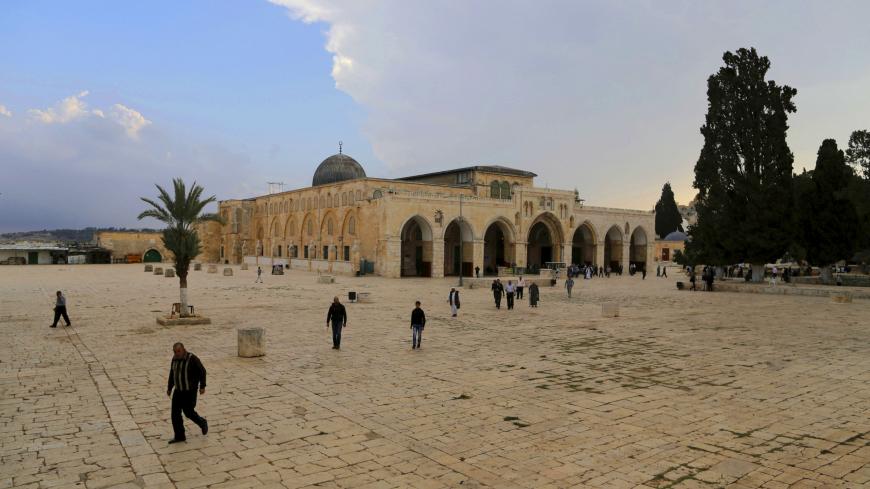 People walk on the compound known to Muslims as the Noble Sanctuary and to Jews as Temple Mount in Jerusalem's Old City, Oct. 26, 2015. - REUTERS/Ammar Awad

After years of being relegated to the sidelines for worry of angering the Israelis, a newly appointed Jordanian Islamic Waqf (Endowment) Council has roared to life, proclaiming a new era in Palestinian-Israeli politics in the holy city of Jerusalem.

More than 1,000 waqf employees in Jerusalem are part of the Jordanian Ministry of Waqf, but until recently Jordan has shied away from taking any proactive role in Jerusalem.

The new two-year council was announced by the reinstated chairman of the council, Sheikh Abdel Azeem Salhab, Feb. 14 in Jerusalem. Salhab stated in press reports that the Jordanian Cabinet approved the new council.

​Wasfi Kailani, director of the Royal Hashemite Fund for the Restoration of Al-Aqsa and a key Jordanian official dealing with Jerusalem affairs, told Al-Monitor that the goals of the newly appointed Islamic Waqf Council is to support Jerusalemites and their steadfastness t hrough their solidarity with the custodianship mechanisms.

“Upon the direction of his majesty King Abdullah II, the custodian of Islamic and Christian holy places in Jerusalem, the new council has been expanded from 11 to 18 members and has been entrusted to draw up an initial strategy to address the extraordinary and unprecedented circumstances that threaten Al-Aqsa Mosque, the Islamic Waqf and the historic identity of the city,” Kailani said.

The new council includes religious and political figures that played a leading role in the 11-day standoff in June 2017, when Muslims refused to enter the mosque through the Israeli-installed metal detectors at the entrances of Al-Aqsa Mosque. These figures include the former mufti of Palestine, Sheikh Ekrima Sabri, and Mahdi Abdul Hadi, the head of one of Jerusalem’s leading think tanks, as well as current and former Palestinian government ministers of Jerusalem, and leaders in the educational, media and business fields in the city.

Abdul Hadi, the founder and director of the Palestinian Academic Society for the Study of International Affairs (PASSIA), told Al-Monitor that the new council is taking over during the Donald Trump storm, Palestinian divisions and Arab normalization. “The people of Jerusalem are laying on our shoulders a historical national responsibility to protect Muslim and Christian holy places and to preserve the cultural identity of the city,” he said.

Hatem Abdel Qader, a former minister of Jerusalem affairs in the Palestinian government and a current member of the new council, spoke on Jordan TV’s program “Eye on Jerusalem” Feb. 18, saying that the council is balanced, pluralistic and includes well-qualified members.

“This new council reflects the large current cooperation and coordination between the Jordanian government and the Palestinian National Authority,” he said, further expressing his hope that the "new council will strengthen support for Al-Aqsa and prevent any Israeli effort to divide the mosque physically or time-wise.”

The addition of political symbolic figures and the presence of a senior representative from the Jordanian royal court, coupled with the initial action of the council when it entered the banned Bab al-Rahmeh gate, signal a clear change toward a more proactive stand by the new council, with political support from Amman.

Ofer Zalzberg, a senior researcher with the International Crisis Group and an expert on Jerusalem affairs, told Al-Monitor that the new council has been appointed against “the backdrop of growing cooperation between the Israel police and [radical Jewish] Temple movements.”

Zalzberg said that the reconstitution of the council reflects an attempt to “strengthen the Waqf by providing the Muslim religious authorities with shared institutional capacities as well as the prestige and skills of prominent, experienced figures respected by Jerusalemites.”

The new council wasted little time in showing that they are serious about their new mission. As part of the Waqf Council’s initial meeting, council members, including the representative of the Royal Hashemite Court, decided to enter the Bab al-Rahmeh prayer hall that Israel had made off-limits to Muslims since 2003. It is unclear why Israel used the protests of the second Palestinian intifada to bar Muslims from using this prayer hall.

Kailani, who attended the first session of the new council and joined the council in a protest prayer inside Bab al-Rahmeh, told Al-Monitor that Jordan has been officially protesting the ban on entry of this location.

“Israel has rejected our repeated requests since 2003 to remove this unfair decision to bar us from using the prayer hall at Bab al-Rahmeh," Kailani said. "So, we decided to visit the location with experts to check out its status after years of denial. We also carried noon prayers at that location to stress that this location is part of the entire Al-Aqsa Mosque and to declare that we reject any attempts to deny us our rights to our holy places.”

The entry of the council members broke a unilateral order of the Israelis. The move of the new council caught Israel by surprise. Israeli police came rushing to the location and placed heavy chains at the gate. This was followed by four days of protests by Palestinian Jerusalemites. Israel arrested dozens of Palestinians, used tear gas against protesters and closed the mosque for a short period of time before an understanding was apparently reached to remove the chains, without giving approval to Muslims to use their own prayer hall at Bab al-Rahmeh.

Jordanian officials, including Kailani, insist that the Islamic Waqf Council’s mandate “doesn’t include in any way the return of Jordanian responsibility outside of the parameter of the holy places.”

The statements of Jordanian officials notwithstanding, the new council has given impetus to the people of Jerusalem and has revived their hopes that they are no longer political orphans without anyone paying attention to their future. The previous council was not empowered by the Jordanian government, but Jerusalemites feel that a new dawn is approaching and have publicly welcomed the all-inclusive council as a leadership vehicle that will allow them to express themselves and to forge ahead with a clear strategy for Jerusalem and its holy places.