The lack of coordination between Israelis and Palestinians at Al-Aqsa Mosque is threatening to dial up tensions at the disputed site. 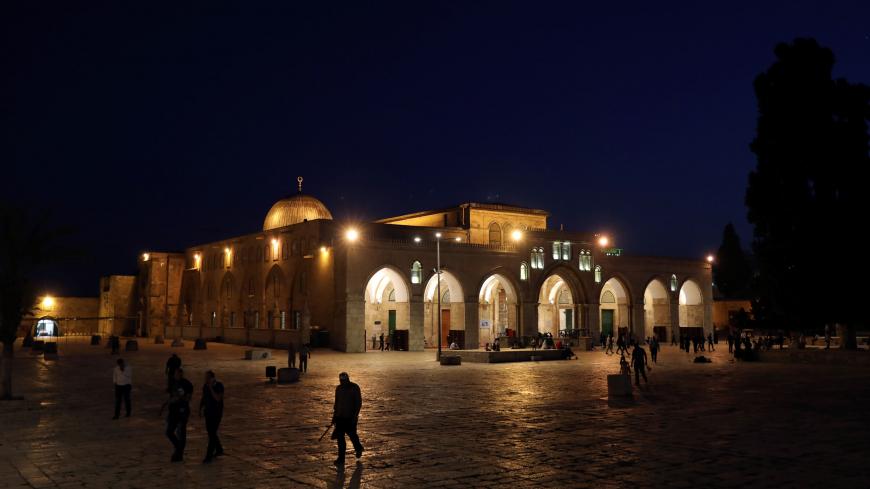 Visitors walk past Al-Aqsa Mosque on the compound known to Muslims as al-Haram al-Sharif and to Jews as Temple Mount, in Jerusalem's Old City, May 9, 2017. - REUTERS/Ammar Awad

Israeli police closed part of Al-Aqsa Mosque compound for seven hours Jan. 14 after a confrontation between guards and an Israeli policeman who tried to enter the Dome of the Rock shrine wearing a Jewish head covering, or kippah.

The violation of the accepted norms of Israeli and Palestinian relations created extreme tension at one of Islam's holiest mosques. Security at the site is regulated by armed Israeli police and unarmed civilian guards; the latter are employed by the Jordanian Waqf (Endowment) Ministry. Jordan is the official custodian of the site.

That day, guards stopped the Israeli security officer from inspecting the dome because of his kippah. Israeli security makes inspection rounds at the site regularly, but never while wearing religious garb. Tensions quickly escalated, leading Israeli security to close the Dome of the Rock. The closure went on for seven hours, forcing Muslim worshipers to conduct their prayers outside. Hundreds of Muslims gathered, and the situation became very tense.

Khalil Assali, publisher of Akhbar el-Balad, a Jerusalem-centric news site, told Al-Monitor Israeli security officials know they must differentiate between their job as police and their religious attitudes. “If he hadn't been wearing the religious head cover or [if he instead] had security headgear on, there wouldn't have been any problem. But the religious head cover became part of the problem between Muslim worshipers and religious Jews who covet the mosque and consider it part of their Temple Mount.” The disputed site, known to Jews as the Temple Mount, is considered holy by Muslims, Jews and Christians.

Wasfi Kailani, director of the Hashemite Fund for the Restoration of Al-Aqsa Mosque and the Dome of the Rock, an institution of Jordan's Royal Committee for Jerusalem Affairs, told Al-Monitor the position of the Jordanian Waqf Ministry and the Palestinian Jerusalemite Islamic institutions since 1967 has been clear.

“Israeli policemen must remain outside Al-Aqsa Mosque/Al-Haram Al-Sharif, and their security duties, legally defined as an occupying power, should be outside the gates of the holy site,” Kailani said.

He added that Israel's police interference and security breaches are unacceptable, regardless of whether a skullcap is involved. “The policemen’s incursion into the Dome of the Rock constitutes a new violation aimed to establish and normalize unprecedented Jewish presence inside Al-Aqsa Mosque, to change its 1,440-year-old status quo.”

Jordan closely monitors the troubles in Jerusalem. “We are always keen on lowering tensions while preserving the rights of Muslim worshipers and Islamic holy sites," he said.

Kailani, who works out of the Royal Hashemite Court in Jordan's capital of Amman, said the tensions were finally resolved after Sheikh Azzam Khatib, head of the Jordanian Waqf in Jerusalem, intervened and the Israeli police agreed to pull back and allow the Dome of the Rock to reopen.

Unfortunately, once those tensions ended, Israeli police arrested the five Jordanian guards who had prevented the Israeli policeman from entering. The Jerusalem Islamic Wafq issued a statement calling on the Israeli government to “release [the] employees immediately and to end unprecedented activities that violate the sanctity of the mosque.” Israel released the guards that same evening after asking them to sign a commitment not to enter the mosque for at least seven days.

Former Palestinian Minister of Jerusalem Khalid Abu Arafeh told Al-Monitor that the guards, who feared the policeman intended to pray inside the Islamic holy site, had acted properly. “The Israeli police could have easily resolved the problem within minutes, but they brought in a large number of soldiers and security to attempt to reinstate their claims that they have sovereignty over Al-Aqsa Mosque.”

Ofer Zalzberg, senior researcher at the International Crisis Group, told Al-Monitor that coordination between Islamic Waqf officials and Israeli police is at an unprecedented low.

“In the last few months, Israel has stepped up its arrests of Muslim guards employed by the Jordanian Waqf. This is highly [unacceptable], and it signals that things are getting out of control and the coordination that could solve such problems is absent."

Zalzberg confirmed there are a number of religious Zionists among the Israeli police force, and the current Israeli government is in tune with these activists and their ambitions regarding Al-Aqsa Mosque. “This affects the conduct of the police and makes their position much more politicized,” he added.

While the tensions reportedly ended without violence, the underlying lesson is that the entire 144-dunam (36-acre) Al-Aqsa Mosque compound, which includes the Dome of the Rock, is a ticking time bomb. Levelheaded leaders are needed to deal with the situation. As the Israeli elections draw nigh, it's very likely that many politicians will be looking for ways to improve their electoral chances. Israeli leaders will be competing to win over religious Zionist voters. Very little effort will be made to ensure that this sensitive and religious site isn't used as a pawn in a political game or as part of Israeli election campaigning.