Jerusalemites are preparing for another battle at Al-Aqsa Mosque compound as Israel moves to close a prayer house worshippers forced open in 2019. 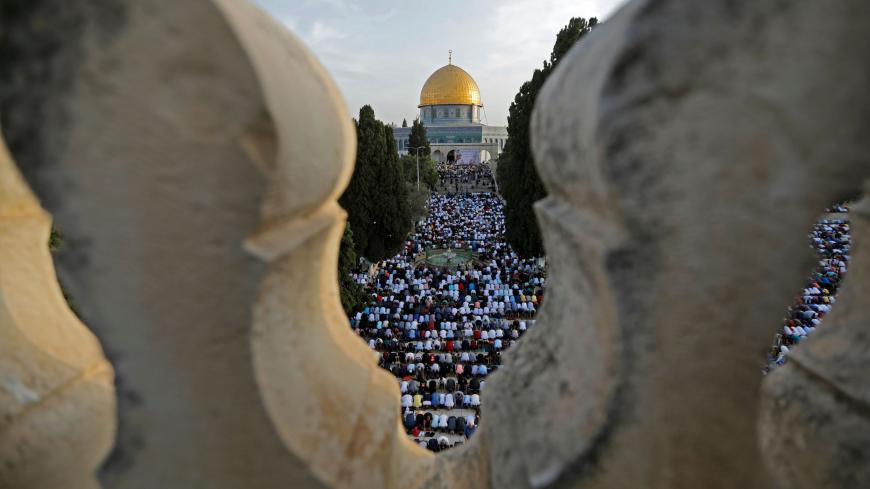 The Jerusalem Islamic Waqf Council received a notice on July 2 that the Israeli police had submitted an urgent request to the Jerusalem Magistrate to close the prayer house.

According to the notice, the council has until July 27 to respond. If it does not, the court will rule on the request to shut it down, Hatem Abdel Qader, a member of the Islamic Waqf Council, told Al-Monitor.

As of this writing, the prayer house is still open.

Abdel Qader said the Islamic Waqf Council will not respond because it does not recognize Israeli jurisdiction over the mosque. He added that the religious authorities in Jerusalem said in a joint statement July 13 that the prayer house closure will have serious repercussions, and that the Jerusalemites will not stay silent.

The 11.5-meter (38-foot) Bab al-Rahma gate is one of the biggest gates in the compound's eastern wall. A building inside the gate served as a prayer house starting in 1992 until the Islamic Heritage Committee rehabilitated it and made it its headquarters. The committee used the building until 2003, when Israel dissolved it.

The Israeli police shut down the prayer house in 2003, claiming that it housed an illegal institution, namely the Islamic Heritage Committee (founded in 1990 and dissolved in 2003), which they labeled a terrorist organization. The decision to close the prayer house was renewed on a yearly basis by the Israeli police chief until the Israeli Magistrate's court ruled in 2017 that it would remain closed indefinitely.

On Feb. 23, 2019, accompanied by the mufti of Jerusalem, Muhammad Hussein, as well as the head and members of the Islamic Waqf Council and Jerusalem sheikhs, Muslim worshippers forced open the Bab al-Rahma prayer house for the first time in 16 years.

If Israel closes the prayer house, Jerusalemites are likely to protest. Abdel Qader stated, “We will counter any Israeli court decision to close the prayer house, which will not be closed again. We are on the way to a situation similar to the battle of the gates in 2017 if the court decides to close it.”

He went on, “No one will be able to stop the worshipers from breaking into the prayer house if it is closed, nor from praying there. … Israel will be responsible for the serious repercussions.”

The battle of the gates was ignited July 16, 2017, at Al-Aqsa Mosque compound after the Israeli police installed metal detectors with which to screen the worshippers. The worshippers protested in front of the mosque where they held their prayers until Israel removed the detectors on July 27.

Jordan has held custodianship of the Christian and Muslim holy sites in Jerusalem since 1924. Jordanian-Israeli relations have worsened over Jordan's opposition to the US Mideast peace plan and the Israeli plan to annex parts of the West bank.

Abdel Qader said it's possible “that the Israeli practices are designed to weaken the Jordanian custodianship due to the Jordanian position against the 'deal of the century' and the annexation scheme. Jordan is subject to US and Israeli pressure and the tense relations with Israel have had an impact on Israel's actions at Al-Aqsa. They are trying to pressure Jordan through these measures.”

“The Jordanian custodianship is total and exclusive. It is a red line for us. We will not accept any other custodianship of Jerusalem. It is a legal, legitimate and historical custodianship and President [Mahmoud] Abbas signed an agreement to this end with the king of Jordan,” he noted.

If Israel shuts down the Bab al-Rahma gate, it could ignite a popular uprising in Jerusalem or a military confrontation with the Gaza Strip. Hamas warned in a July 14 press release that “any attack on Al-Aqsa Mosque or its status could lead to war,” and said that the closure is an Israeli scheme to divide the mosque.

Speaking at a July 15 graduation ceremony in Gaza, Hamas political bureau member Khalil al-Hayya said, “Getting near Jerusalem or Al-Aqsa is like playing with fire. The resistance will stand strong against the occupation.”

The grand mufti of Jerusalem told Al-Monitor, “The prayer house will remain open to worshipers and is an integral part of Al-Aqsa Mosque. These decisions are rejected. We cannot accept them.”

The head of the Supreme Muslim Council in Jerusalem, Ekrima Sabri, told Al-Monitor that the Israeli measures “targeting Bab al-Rahma prayer house seek to change the status quo at Al-Aqsa Mosque and to turn it into a Jewish synagogue.” He went on, “When the occupation authorities insist on closing the prayer house, we will have take action. Muslims opened Bab al-Rahma in February 2019, and they will decide its fate."