Israel’s decision to reclose the Bab al-Rahma building reflects once again the government’s provocative and dangerous policy over Temple Mount and Jerusalem. 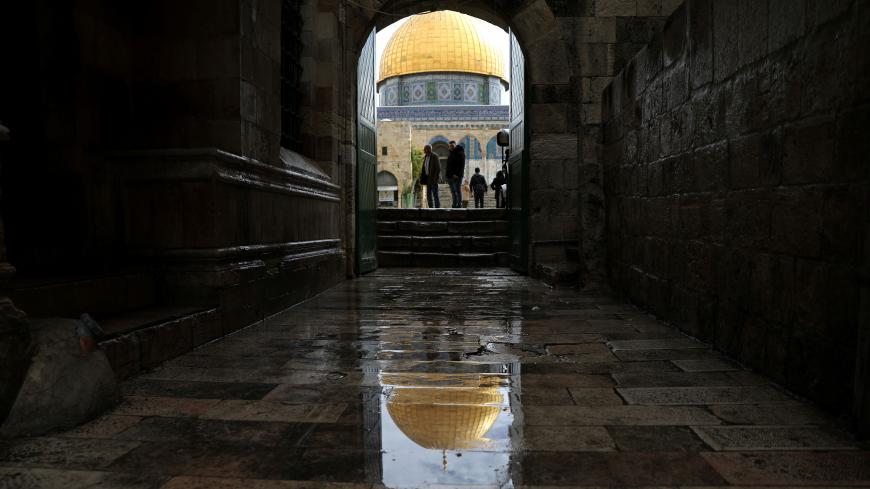 Al-Aqsa Mosque reflects on the floor next to a gate to the compound known to Jews as Temple Mount and to Muslims as the Noble Sanctuary, in Jerusalem's Old City, March 14, 2019.

The government of Israel scored another victory in its struggle against Palestinian Muslims on March 17 when the Jerusalem Magistrate’s court issued a temporary closure order against the contested site known as Bab al-Rahma (Gate of Mercy) on the Temple Mount compound. It is now up to Public Security Minister Gilad Erdan to instruct police to reseal the site the court shut down in 2003. Given the sensitive nature of the area, revered by both Muslims and Jews, this hot potato will likely end up on the desk of Prime Minister Benjamin Netanyahu. A decision to enforce the court order could ignite flames in Jerusalem and the West Bank and spark a crisis in relations with Jordan. However, a stay of the order and acceptance of the Muslim decision last month to reopen the site and use it as a mosque would play into the hands of the political right vying with Netanyahu’s Likud for every vote in the April 9 elections. Chair of the Muslim Waqf in Jerusalem Sheikh Abdelazeem Salhab on Feb. 18 warned, “The mosque is a red line.” He added, “No Muslim would give up a single grain of its sand.” Salhab also said the Waqf, the custodian of the site, planned to renovate the structure and reopen it as a mosque and as offices. Following the latest court order, the Jordanian Foreign Ministry announced that it does not recognize the authority of an Israeli court over East Jerusalem, including Al-Aqsa Mosque compound, which it views as territory unlawfully occupied by Israel since 1967.

On the other side, the New Right party announced March 6, “Allowing the Waqf to revamp the Gate of Mercy site is a capitulation to terrorist thuggery.” The party urged Netanyahu “not to surrender to terrorism." “Laws are enforced with an iron fist not by giving in to a gang of hooligans that identifies weakness and abuses it,” said the party. The last time Netanyahu decided to flex his muscles on the Temple Mount, giving in to similar political pressure in July 2017 and going along with police recommendations to place metal detectors at the gates of the compound, violent protests erupted in East Jerusalem and the West Bank.

In a March 7 article on the Ynet website, lead researcher of the left-wing Ir Amim nonprofit Aviv Tatarsky recalled that at the time, police assured those opposed to the metal detectors that “the Palestinians will simply have to get used to them.” No sentence refutes more clearly the accepted assumption that as an alternative to ending its occupation and conflict with the Palestinians, Israel had opted to manage the conflict. In fact, the precise definition of Israel’s policy is “fanning the conflict,” and nowhere does this policy fuel the flames higher than on the Temple Mount.

The Jerusalem syndrome is not confined to the walled Old City. The right-wing government aims to bury the 1993 Oslo Accord with the Palestinians and use it as a tool to dig the grave of the two-state solution — a solution not feasible in any way absent a change in the current legal status of East Jerusalem.

At the end of January, by virtue of the 1995 interim agreement with the Palestinians (known as Oslo II), Erdan signed a periodic injunction banning the Palestinian Authority (PA) from “opening, operating a representative office, holding a meeting or any activity within Israel’s territory.” The order limits the activity of the Orient House, which served as the headquarters of the PLO in East Jerusalem, and of other institutions, including the East Jerusalem Chamber of Commerce, the Supreme Council for the Arab Tourism Industry, the Palestinian Prisoners Club, the Center for Palestinian Studies, and the Office for Social and Statistical Studies. In signing the order, Erdan said, “Extending the closure of the Palestinian institutions is a message to the PA and the residents of East Jerusalem that the State of Israel does not intend to relinquish its sovereignty in East Jerusalem and will not allow any [other] foothold there.”

Erdan based his statement on the 1967 decision by the Israeli government to apply Israeli law on east Jerusalem — a decision later anchored in Israeli law. This decision contradicts international law and the stances of UN member states, including the United States. Those states do not recognize the ‘’unification’’ of the city. It seems that Erdan had forgotten (or maybe he relies on people’s short memory) the April 2003 Road Map for Peace in the Middle East, approved by the Sharon-Netanyahu government and unanimously adopted by the UN Security Council. The document, as it appears on the Knesset and Foreign Ministry websites, stipulates that as a first stage and by the end of that year, Israel would reopen the East Jerusalem Chamber of Commerce and other closed Palestinian institutions in the east of the city. The reopening was to be conditioned on these institutions operating only in accordance with previous agreements between the sides.

Israel has not implemented a single line of that clause. Rather, the government has been trying to push out the Palestinian presence from the eastern part of the city, especially from the Old City Basin. The Gate of Mercy/Bab al-Rahma conflict is a typical example of the use Israel makes of the Jewish narrative about Jerusalem while denying the Muslim narrative. Indeed, Muslim worshipers were the ones to break into the Bab al-Rahma building last month, but it was Israel that locked it 16 years ago.

Ran Bar-Yaakov, a Jerusalem researcher of Bab al-Rahma, refuted this week prevailing Israeli-right claims that the site was never used as a Muslim prayer house. Writing in Haaretz, he noted that Bab al-Rahma served as a separate mosque in both the early Arab and Mamluk periods. In his 2014 book, “Eretz Israel in Medieval Arabic Sources (634-1517)," researcher Uri Tal cites the impressions of an 11th-century traveler to Jerusalem who described “a handsome mosque decorated with all types of carpets, with an allocation of servants, into which many people come to pray.”

The first episode of a documentary series by filmmaker Roni Koban titled “The Exceptions,” which aired on March 17 on the Kan public broadcasting channel, provides a peek at individuals and groups plotting to demolish Al-Aqsa and other mosques on the Temple Mount to make way for a third Jewish temple. These religious zealots operate unhindered and even enjoy the support of prominent public figures, chief among them the popular ultra-right candidate running for the Knesset, former Knesset member Moshe Feiglin, and Likud Knesset member Yehuda Glick. As far as they are concerned, the Muslims are foreign invaders who should have no part of Jerusalem.

Such victories in the war over competing narratives, closure orders of worship sites in Jerusalem and bans on the activity of civil society bring to mind the saying, “Any more victories of this kind and we are doomed.” Throughout history, Jews, Muslims and Christians lived peacefully in the Old City as good neighbors. Jerusalem is far too dear to be abandoned in the hands of politicians and far too volatile to be left in the hands of religious zealots, who would set it on fire.