Israeli Prime Minister Benjamin Netanyahu and Jordanian King Abdullah II share a similar dilemma: They both need for tensions on the Temple Mount to calm down, but cannot afford to appear as the weak side in this affair. 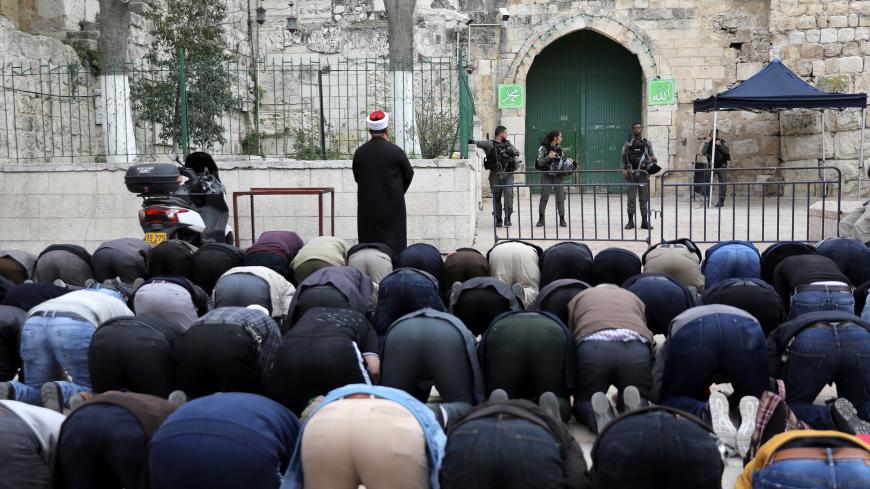 One small building in the most volatile spot in the world, the Temple Mount in Jerusalem’s walled Old City, threatens the stability of Jerusalem and beyond. The tense standoff between Israelis and Palestinians over the ancient, rundown building adjacent to Bab al-Rahma, the Gate of Mercy, could set off an explosion similar to the 2017 clashes that erupted after Israel placed metal detectors at the entrance to the Temple Mount, holy to both Muslims and Jews.

At issue are the fragile status quo at the site, Prime Minister Benjamin Netanyahu’s electoral constraints, Palestinian pride, the authority of the Jordanian-controlled Muslim Waqf that is the custodian of the site and Hamas, which has its fingers in every anti-Israel pie. The movement is taking advantage of the crisis, calling “Muslims everywhere” to defend with their bodies the holy mosque that the “Zionists” are trying to desecrate and shut down. Hamas enjoys the backing of Turkish President Recep Tayyip Erdogan, who has been seeking a foothold on the Temple Mount in recent years in defiance of Israel’s anger.

With slightly over three weeks to go before Israel’s elections, on April 9, Netanyahu finds himself in a bind. On the one hand, he must signal a tough, uncompromising line on this conflict to stem any defections by Likud Party voters to other right-wing parties. On the other hand, the last thing he needs right now is a blowup on the Temple Mount.

The events leading up to the latest cycle of violence escaped the attention of various Israeli security agencies including the Shin Bet, Israeli Police and even the Mossad agency responsible for providing intelligence on Jordan. As aforementioned, the building in question is located adjacent to the Temple Mount gate known as Bab al-Rahma, which can only be accessed from the Temple Mount itself. Israel shut down the gate and adjacent building in 2003 under a court order after discovering that the nonprofit organization running the site was not legally registered and was associated with Hamas. The building was locked and empty until last month.

“The closure order expired,” a senior Israeli source dealing with the crisis told Al-Monitor on condition of anonymity. “When the Waqf realized it, they quickly organized a tour of the site for the media and declared the building open for public prayers.” Prayer rugs were spread out and prayer services began. Israel realized belatedly that the Waqf was recently expanded to include 18 rather than 11 members.

“They added members considered close to the Palestinian Authority [PA] at the expense of Jordan’s influence on the custodianship,” an Israeli intelligence source told Al-Monitor, speaking on condition of anonymity. The additions to the Waqf, and reports that US President Donald Trump’s “deal of the century” for Israeli-Palestinian peace would soon be unveiled, created a clear Palestinian interest in illustrating the volatility of the Temple Mount issue and signaling to the United States and the rest of the world that anyone who lays a hand on the Temple Mount risks a regional conflagration.

The contested building served as an ideal trigger for stirring up anger and highlighting Palestinian sovereignty claims to the site. Israeli intelligence did surmise that the Palestinians would try to stir up unrest in Jerusalem and on the Temple Mount ahead of the US peace plan presentation, but no one pointed to the specific building that would set off the clash. The expansion of the Waqf passed under the radars, taking Israel by surprise. Now Netanyahu is trapped. Hard-liners are accusing him of being soft on the Palestinians and trying to contain the conflict without insisting that the building be shuttered once again. On the other hand, he does not really want to set fire to Jerusalem and possibly the entire area just weeks before the April 9 elections.

Netanyahu has tasked the head of his National Security Council, former senior Shin Bet official Meir Ben-Shabbat with handling the delicate issue. Over the past two weeks, Israeli delegations have visited Jordan, perceived as the only party able to restore calm. The Jordanians have reciprocated with visits to Jerusalem. Earlier this week, the palace in Amman issued an urgent order to the Waqf to exercise restraint and de-escalate tensions, but the unrest continued.

Hamas is doing its best to open a “second front” with Israel in East Jerusalem. Erdogan’s Turkey is enthusiastically adding fuel to the flames. Hamas, which received March 11 its latest cash aid installment from Qatar, via the United Nations Relief and Works Agency for Palestine Refugees, is restoring calm in the Gaza Strip but needs an external front on which to keep harassing Israel without paying a price. The Temple Mount is an ideal solution. Since the PA cannot afford to be far behind Hamas in confronting Israel, it too has entered the fray and is trying hard to fan the flames.

Israel is now gearing up for Friday, March 15, when tens of thousands of Muslims will converge on the Temple Mount for weekly prayers, fearing the event could spark riots. “On any other day we can prevent them from breaking into the building with relative ease because there aren’t too many people there,” a senior Israeli diplomatic source told Al-Monitor on condition of anonymity. “But on Friday, with the Temple Mount filled with tens of thousands of people, thousands of police will be required to control the situation.”

Right now, no one in Israel is willing to deploy thousands of Israeli police officers to face off the Friday Muslim worshippers. Netanyahu is trying to buy time. Israel went back to the Magistrate’s Court in Jerusalem to ask for an extension of the closure order that expired to allow it to shut down the building once again. The Shin Bet has issued an opinion justifying this move on security grounds. On March 12, the court rejected the state’s petition. At the same time, a compromise is in the works that would not allow the building to be turned into a mosque and leave Israel and Jordan to decide its fate together.

Jordan’s monarchy is also in a bind. King Abdullah does not want riots on the Temple Mount, presenting him as a weak ruler. On the other hand, he cannot appear to be doing Israel’s bidding. Abdullah and Netanyahu are in fact in a similar bind — both want calm restored, neither can afford to compromise and appear weak.

Given this state of affairs, everyone is gearing up for Friday prayers. On March 12, a firebomb was thrown from the Bab al-Rahma building at the Israeli Police position on the Temple Mount, slightly injuring a policewoman. Police vacated the site and violence broke out, but did not spread beyond the compound. No one is prepared to promise that similar violence will not erupt this coming Friday when the Temple Mount is packed with Muslim worshippers and Israeli Police.