With President Donald Trump set to unveil his much-hyped peace plan and Israel deducting Palestinian tax revenues, the disputed compound of Al-Aqsa or the Temple Mount is crackling with tension. 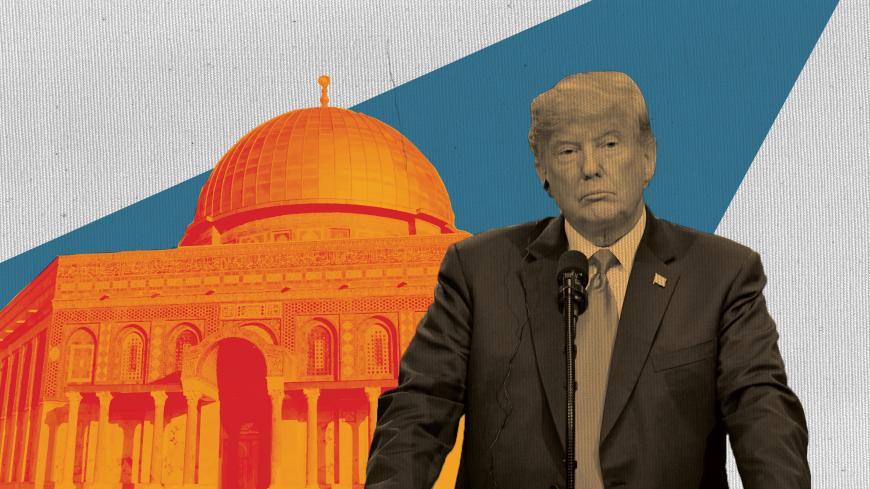 Israel arrested Adnan Gheith, governor of the Jerusalem District of the Palestinian Authority, sometime in the night between Feb. 26 and 27. On the backdrop of growing tensions over the Temple Mount compound and Al-Aqsa Mosque, Gheith was one of many senior officials arrested, including Waqf Council chairman Sheikh Abdel Azzam Salhab, in response to a Feb. 22 incident in which thousands of Muslim worshippers broke into the Bab al-Rahma (Gate of Merci, or Golden Gate) structure and held a mass prayer service there.

Israel shut down the building in 2003 upon the order of the chief of the Central Command, later backed up by an administrative order from the Jerusalem District Court. The argument was that activities taking place at the site were connected with the Northern Branch of the Islamic Movement (which has since been outlawed) and Hamas. The building has been locked since then and worshippers are denied entry. There were no protests when the building was first closed, nor were there any problems at the site during the Temple Mount riots of 2015 and 2017.

Israel is convinced that the Palestinians’ seizure of the Gate of Merci at this point in time had been planned well in advance by the Jerusalem Islamic Waqf (custodian of Muslim holy sites) with Jordanian knowledge. At the order of Jordan’s King Abdullah, the Waqf was recently expanded from 11 to 18 representatives, with the seven new members representing the PA. The change in the group’s composition was unusual, and can be taken as evidence of a change in Jordan’s policy. Ever since control of Al-Aqsa Mosque was transferred to the kingdom after the 1967 Six-Day War, Jordan has been an ardent protector of its rights and responsibilities over the Muslim holy sites in Jerusalem. So far, the kingdom has allowed no one much room to maneuver there so as not to risk its control of the compound.

One of the new members of the Waqf is Fatah activist Hathem Abdel Qadr. In a Feb. 24 interview with the Palestinian press, he noted that the Waqf Council has a meticulous strategic plan “to protect Al-Aqsa Mosque and Jerusalem” and that the Gate of Mercy is one of its focal points. According to him, close cooperation between the Palestinians and Jordan has put Israel into a situation where it has no choice but to allow worshippers to break into the Gate of Mercy structure. “As evidence of this, Israeli security forces did not prevent worshippers from entering the Gate of Mercy compound on Friday,” he noted, and he was right. Both the police and the military refused to act.

Even before last Friday, worshippers had attempted to break into the Gate of Mercy structure, prayers rugs in hand. The Waqf appointed an imam for the mosque, so the Israeli security forces must have been aware of the activity. They must have assumed that a significant build-up of forces around the Temple Mount to protect a single building would boomerang against Israel, intensify tensions in the area and increase the likelihood of an incident with casualties.

It looks like Israel preferred to allow thousands of Muslim worshippers to enter the sealed building and then handle the situation through quiet diplomacy. Israel did send a message to Jordan that it must get involved to avoid an escalation and that Israel’s political leadership would not allow any changes to the status quo. Nevertheless, it looks like the Jordanians have no plans to act. An Israel security source who spoke with Al-Monitor on condition of anonymity said that the Jordanians “really don’t care” about the Israeli message.

The decision by the security forces to act under the radar is based on the regrettable experiences of the past. The second intifada erupted following riots on the Temple Mount in September 2000 after a much-publicized visit by then-opposition leader (and future prime minister) Ariel Sharon to the site. Then again in September 2015, 15 years later (and coinciding with the Jewish holidays), violent riots erupted following a visit by right-wing Knesset members and ministers to the Temple Mount. As a result, Prime Minister Benjamin Netanyahu banned elected officials from visiting the Temple Mount until the Arab outrage had subsided.

Two years later, in 2017, three Israeli Arabs from Umm al-Fahm committed a terrorist attack on the Temple Mount, leaving two border police officers dead. Israel responded by installing metal detectors on the site, but was later forced to remove them after a protest led by the Waqf as well as tens of thousands of worshippers who gathered to pray outside the Temple Mount compound. Netanyahu folded, the metal detectors were removed and quiet was restored, if only briefly.

Now, the Temple Mount is back in the eye of the storm, and once again it looks like Israel’s hands are tied. The arrest of the Jerusalem governor and the Waqf Council chairman (both of whom were released immediately after questioning) seem to have been intended to allow Israel to make it clear to the Waqf how dangerous the activities they instigated are. But it would be naïve to think that the Waqf’s representatives acted independently. One senior security source told Al-Monitor that he believes Fatah is preparing for the release of the US peace plan by establishing facts on the ground, particularly in Jerusalem. That explains why Fatah is willing to gamble, even at the cost of riots spreading across the West Bank.

All of this comes against the backdrop of Israel’s decision to offset tax revenues it collected on behalf of the PA. On Wednesday, Israel deducted 40 million shekels ($11 million) from the 700 million shekels ($193 million) it was supposed to transfer to the Palestinians. Palestinian President Mahmoud Abbas announced earlier that he would refuse to accept the money if Israel withholds any of it. It therefore seems clear that the PA is getting ready for a fight, and as far as it's concerned, Al-Aqsa Mosque is the perfect place to launch the campaign.

How should Israel prepare for a conflict that seems inevitable? It is possible that Netanyahu will be forced to fold on the issue of the tax money, but the chance of that happening tends toward zero. There are less than six weeks left until the election, but it looks like another round of violent riots on the Temple Mount is even closer.