The International Crisis Group report on Al-Aqsa compound in Jerusalem tackles this controversial issue for Muslim Palestinians and Israeli Jews, and proposes recommendations to de-escalate the tension between all concerned parties, including Jordan. 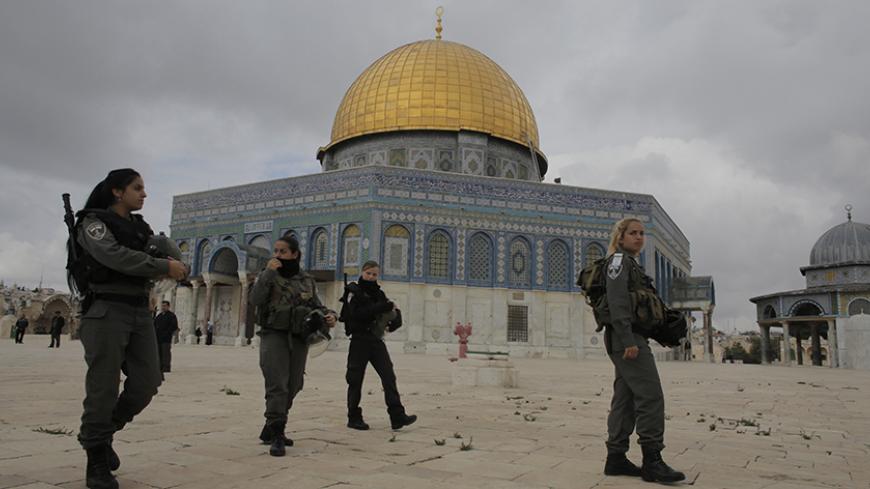 Israeli border police officers walk in front of the Dome of the Rock on the compound known to Muslims as Noble Sanctuary and to Jews as Temple Mount in Jerusalem's Old City, Nov. 5, 2014. - REUTERS/Ammar Awad

The status of Islam’s third-holiest site, Al-Aqsa Mosque, has been the subject of many academic and research efforts, most of them with an ideological bias. Israeli Jews consider the site of utmost importance to them and most research associated with Israel reflects this view. Some right-wing Israelis often try to stir up other Jews about access to the compound that houses the mosque, emphasizing that the Jews who won the 1967 war still “don’t have unfettered access,” including the right to pray at the mosque.

Arab Muslims fear Israeli attempts to Judaize the site, or, at best, to impose a policy where the site is shared with Jews, similar to the arrangement at Hebron’s Ibrahimi Mosque, where over the past 48 years prayer areas in parts of the mosque are shared by Jews and Muslims. For Muslims, the entire walled and guarded compound that includes Al-Aqsa Mosque — Masjid Omar, the Islamic Museum and the courtyards — is generally referred to as Haram al-Sharif (Noble Sanctuary) and is regarded as one holy site.

The highly sensitive issue of Al-Aqsa compound was addressed by the International Crisis Group (ICG) in Brussels with an unprecedented in-depth study. To avoid any linguistic bias, the nongovernmental organization referred to the compound — known to Muslims as Haram al-Sharif and to Jews as Temple Mount — as the "Esplanade."

When Israel occupied Jerusalem in June 1967, the issue of Jews entering the Esplanade area was indefinitely postponed as a result of a convenient ruling by the Chief Rabbinate on June 10, the last day of the June 1967 War. It ruled that because the location is holy to Jews, no religious Jew is allowed to set foot on any of the area that is referred to as the Temple Mount by Jews in order not to defile it. The statement said: "In view of the fact that the holiness of the area never ceases, it is forbidden to ascend the Temple Mount until the Temple is built."

While the rabbinical order still stands, some cracks appear to have been found in this edict. Some rabbis who have individually permitted entry to certain parts of the Esplanade gave the advice that Jews entering do not wear shoes in case they happen to step on an area that might be holy to Jews.

The ICG report noted that whereas 30 years ago rabbis of the religious Zionist camp categorically rejected Jewish ascent to the area, “today they are split on the question, though they remain united in opposition to moving ahead to construct the Third Temple.”

In its recommendations, ICG addressed the issue of access, prayer, archaeological digs and other elements related to the Esplanade. The well-researched 35-page report is based on research and interviews with all relevant groups, including Israelis, Jordanians and Palestinians. The latter get the least attention in the report because of the unique situation at Al-Aqsa compound, where the Islamic Waqf — an affiliate of the Ministry of Awqaf in Jordan — is entrusted by the Muslim world to administer and control the entire site together with the Israelis.

In its summary, the report deals with two issues where it deviates from the accepted opinions of the two conflicting parties. It doesn’t accept the repeated Arab and Muslim claims that Israeli archaeological attempts are aimed at destroying the mosque, and at the same time it accepts Muslim demands that organized and planned visits by Jews to the site should be tightly regulated and that Jews should continue to be disallowed from praying at the compound. Al-Aqsa has banned non-Muslim prayer since 1187.

A long section of the report and recommendations are devoted to the issue of access by Jews to the Esplanade. The ICG accepts that in the same way tourists are allowed visits to the area at certain hours after buying a ticket for a symbolic amount and respecting the dress code, Jews wishing to visit should be permitted to do the same — without being allowed to pray. The report’s researchers said senior Israeli officials at the prime minister’s office were considering allowing the Waqf to again collect entry fees, but also do not want to renew the Waqf’s authority to veto who would enter.

The practical problem is that since the second intifada — which erupted following Israeli opposition leader Ariel Sharon’s provocative visit on Sept. 28, 2000, to the Temple Mount — one of the compound's entryways, the Moghrabi Gate, has come under full control of Israeli security. Unlike the other gates that have an Israeli and a Jordanian Waqf guard, the Moghrabi Gate has no Muslim guards. As a result, and since October 2000, Jews (and others) visiting the Esplanade using this gate have not had to buy a ticket or be obliged by the Waqf guards to obey religious traditions. The only exception, the report notes, has been that the Israeli security and Waqf Muslim guards have made sure that Jewish visitors are not allowed to make any expressions of prayer while visiting the Esplanade.

According to the ICG, the Israeli side’s willingness to return to the pre-September 2000 understandings of buying tickets from the Waqf and abiding by its terms has not come to fruition because of one issue: Israelis are afraid of the veto power that Jordanian Waqf officials would have on the entry of some radical Jews. The ICG researchers noted that Jordanian officials promised that this veto power will not be abused, but this has not convinced Israelis to allow a Jordanian-employed Waqf guard to be stationed at the Moghrabi Gate. The researchers strongly believe that this issue is resolvable, but will require some high-level political intervention.

Another problem that has caused anger among the Palestinian worshippers and led to the escalation of the Esplanade issue has been the size and high-profile membership of the visiting groups. For years, groups of up to five people only were allowed access by the Jordanian Waqf guards. But last year, groups, including Knesset members, reached 35 to 50 people. The repeated large and high-profile visits escalated tensions that caused major violence between the worshippers and the Israeli security.

The clashes in the fall of 2014 also led to restrictions by Israel on visitors to Al-Aqsa Mosque for Friday prayer, further exacerbating the issues. Finally, on Nov. 5, 2014, and after a violent confrontation and an unprecedented Israeli restriction on Muslim worshipers' access to the holy site, Jordan intervened and withdrew its ambassador to Israel.

Since then, a noticeable de-escalation has taken place; a unilateral Israeli decision to prevent extremists and Knesset members from entering the Esplanade rescinded entry restrictions of Muslim worshipers on Fridays. The number of Jews in a single group allowed access was sharply reduced after the intervention of US Secretary of State John Kerry, who made a surprise visit to the region and met with all key leaders. "Israeli authorities reduced the size of groups of religious Jews permitted to enter, limiting them to five initially and currently to fifteen," according to the ICG report.

Another issue that ICG identified is the lack of any communications between Israel and the Palestinians regarding the Esplanade issue. Israel and Jordan communicate on the issue and Jordan’s high-level diplomatic intervention succeeded last winter to put a stop to Israeli provocateurs’ encroachments on the mosque, but at no time has Israel attempted to reach out to or carry out any discussions with any Palestinian official. ICG researchers concede that Israel is unlikely to deal with the Ramallah-based Palestinian government anytime soon, and therefore are suggesting that Israel agree to work with a Palestinian advisory group that is representative of Palestinians in Jerusalem without being officially linked to Ramallah.

Najeh Bkerat, who is in charge of Islamic manuscripts at Al-Aqsa, welcomed the recommendations of the ICG. However, in a phone interview with Al-Monitor, Bkerat insisted that the problems at Al-Aqsa are not limited to visitor regulations. He said, “We should not reduce the problem to that of visitations. Since 1967 we have been under occupation and all our religious sites are under siege.” Bkerat said that he welcomes all positive recommendations and will look carefully at those that are negative as well, and added that a full response by the Islamic Waqf to the ICG report will be made public once it is carefully studied.