Recurrent prayer by Jews at Al-Aqsa Mosque against regulations can be expected to continue to spark clashes at the site. 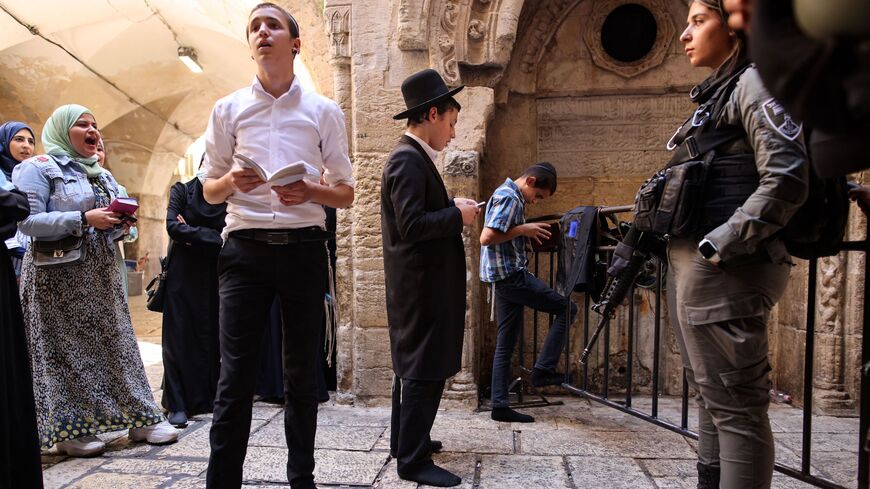 Ultra-Orthodox Jewish youths pray in front of a closure manned by Israeli security forces as a group of Palestinian women protest being denied entry outside the Al-Aqsa compound in Jerusalem on July 18, 2021. - AHMAD GHARABLI/AFP via Getty Images

For nearly a millennium and a half, Muslims have had control of Al-Aqsa Mosque in Jerusalem, Islam’s third holiest site, except for a span during the rule of the crusaders between 1099 and 1187. Even following the 1967 war, Israel was careful not to allow Jews to pray in the mosque compound.

Under an edict by Israel’s two top rabbis, Jews are not to set foot in the mosque area, which Jews call the Temple Mount. Jews believe the Temple Mount to be the site where the Biblical First and Second temples used to stand. The chief rabbis have reiterated their ban a number of times. But in recent years, and despite that ruling, Jews have insisted on entering the mosque in any way and trying to sneak in prayer here and there. In the latest twist, Israeli police in Jerusalem were forced to go to court and request that the court defend their position on barring Jewish prayer at Al-Aqsa.

The mosque area — officially called al-Haram al-Sharif/Al-Aqsa Mosque — is a protected UNESCO World Heritage Site. International rulings, as well as bilateral agreements between Israel and Jordan, recognize that the Islamic Waqf Council appointed and run by the Jordanian Waqf Ministry is the sole party responsible for managing this historic site.

Despite the edict banning Jewish prayer, which is stated in Hebrew on a sign at the entrance to Al-Aqsa closest to the Western Wall — some hardline Jews have found other religious edicts to circumvent it, and have been making regular visits to the mosque complex in an attempt to regain control over it or parts of it.

The mosque’s Jordanian custodians have never had a problem with visitors so long as they visit during set hours and respect the sanctity of the site in their dress and behavior. For a long time non-Muslims have been able to visit the site with permission from the Waqf Council, gaining access usually through Bab al Majlis and getting a visitor’s ticket from the Islamic Waqf council.

Each of the compound’s gates are guarded jointly by the Israeli police and an unarmed guard from the Waqf Council guard, except for one. The Moghrabi Gate, which is the closest to the Western Wall, has been guarded only by Israeli police ever since the breakout of the protests in October 2000 when Ariel Sharon visited the mosque as part of his election campaign to become prime minister.

The protests were put down violently, leading to the killing and injury of dozens of Palestinians, and the movement spread throughout Palestine and Israel to become known as Al-Aqsa Intifada or the second intifada.

Since then, the Israeli police have been making decisions about visitation to the mosque area without coordinating with the Waqf Council. The council issues a daily report of the number of visitors and protests their entry, calling them “infiltrators” — the term it uses to refer to non-Muslims who enter Al-Aqsa without the Waqf’s coordination.

Opposition to this uncoordinated entry by Muslim worshipers has led them to clash with the Israeli police — reaching the level that the United States intervened during the administration of former President Barack Obama.

Former Secretary of State John Kerry sponsored a summit in 2014 between then-Israeli Prime Minister Benjamin Netanyahu and Jordanian King Abdullah in Amman. The summit reached a simple but important understanding that stated Al-Aqsa is for Muslims to pray and for all others to visit.

But radical Jews did not abide by this understanding and at different times Jewish infiltrators would sneak in and appear to be praying. The Israeli police, who prevent Muslims from intervening, would try to stop them.

At one time a rabbi prayed repeatedly and the police ordered him not to return to the mosque area. He appealed the ban this past summer and a right-wing magistrate judge ruled that his silent prayer was not a crime. The ruling — which came a month after Israeli Prime Minister Naftali Bennett indicated support for Jewish prayer at that Islamic holy site only to quick retract it — was widely condemned in Jerusalem and throughout the Arab and Muslim world.

Given the increasing tensions in Jerusalem, Israeli police quickly appealed and the district court overruled the lower court. But while the cancelation of the ruling was well received, the problem of Jews trying to pray in Al-Aqsa has continued and will continue to be supported by Israeli politicians when they consider it to be the right time.

Palestinians in Jerusalem, Waqf officials in Amman, and Muslims around the world are going to have to stay on their toes as attempts by some Jews to pray at Al-Aqsa will certainly be a recurrent event.