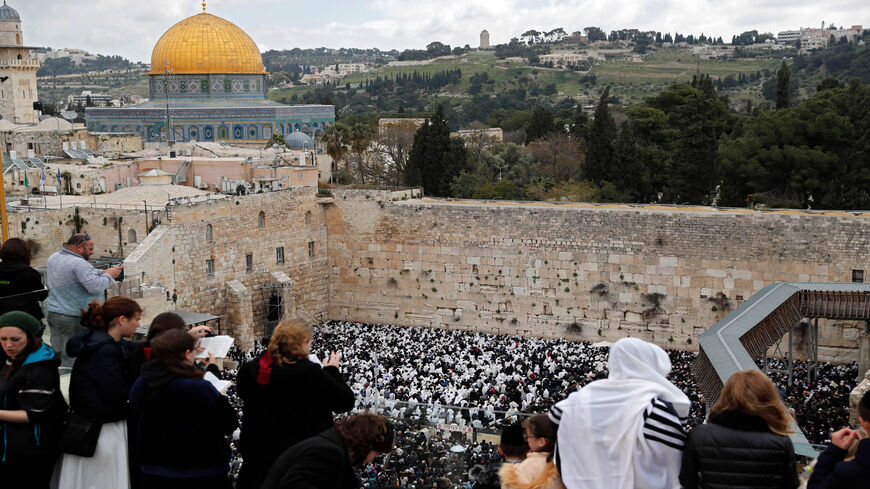 Pious Jews join prayers from a terrace overlooking the spot where Jewish priests covered with black and white Talit prayer shawls perform the Cohanim prayer at the Western Wall, with the Dome of the Rock shrine seen in the background, during the Passover holiday, Old City of Jerusalem, April 22, 2019. - Thomas Coex/AFP via Getty Images

The Jerusalem Magistrates Court, the lowest level of the Israeli judiciary, ruled Oct. 6 in favor of Rabbi Aryeh Lippo, allowing him to pray silently at the Temple Mount/Al-Aqsa Mosque compound. Lippo had petitioned against Jerusalem’s police, who had banned his visits to the site for 15 days. The ban decision came after a police officer ordered him to stop praying there during a visit Sept. 29, just after the Jewish Sukkoth festival. Jerusalem police has appealed the ruling. It maintains that Lippo had engaged in improper conduct in a public sphere.

The Jerusalem Magistrate Court ordered the Jerusalem police to shorten the ban and allow Lippo to return to his quiet prayer there. Judge Bilha Yahalom ruled that Lippo’s behavior did not violate the law or police instructions on the site, as he was praying by himself, without a crowd and quietly, in a way that was not external or visible. She wrote in her ruling, "The appellant stood in the corner with a friend or two, there was no crowd around him, his prayer was quiet, whispered. I have not found that the religious acts carried out by the appellant were externalized and visible." Yahalom noted that such prayer did "not violate police instructions." She continued that Lippo’s daily arrival at the Temple Mount indicates that this was a matter of principle and substance for him.

The ruling by the Jerusalem Magistrates Court is unprecedented, as it seems to question the status quo that has prevailed over the site for about five decades. Israeli law does not prohibit Jewish prayer at the compound. Still, since the 1967 Six Day War and the unification of the city, Israeli authorities have enforced a ban on Jewish prayer on the Temple Mount to prevent tensions vis-a-vis Muslim worshippers and the Arab world. More precisely, Jews are allowed at the compound on specific hours only. They must enter the site in groups and walk in a set path that circumnavigates the golden Dome of the Rock shrine. They are not allowed to pray at the site.

The Temple Mount/Al-Aqsa Mosque compound is considered the emotional/religious epicenter of Jewish-Muslim conflicts and one of the most volatile points in the Middle East. The Muslim Waqf, composed of Jordanian and Palestinian representatives, administers Muslim religious activities there. Jordan enjoys a special status of guardianship over the Al-Aqsa Mosque complex. It had complained several times against Jews allegedly violating the status quo, and so had the Palestinians. The status quo instructions that have been enforced by police over the years were the source of numerous conflicts there and in the Israeli political, diplomatic and security arenas. Thus, tensions there were partly the reason for the 11-day Gaza war in May (Operation Guardians of the Wall).

In addition to the status quo, designed to maintain public order, mainstream rabbinical authorities had opposed over the years Jewish prayer on the Temple Mount for a few reasons. One reason was that without a Jerusalem temple, Jews cannot really become pure as tradition requires for entering the holiest site of Judaism. Thus, Jewish worship has been centered for generations at the Western Wall Plaza below.

Despite rabbinical objections, several groups and individuals — mostly hard-line religious nationalists — have been active in recent years to encourage Jews visiting the site and praying there. In fact, the number of Israeli Jews visiting the compound keeps growing. More so, in recent months, reports indicate that police are enabling quiet Jewish prayer there, contrary to past years.

The Waqf called the Oct. 6  ruling a “flagrant violation” of the compound’s sanctity and said it constitutes clear provocation for Muslims worldwide. Jordan called the decision “a serious violation of the historical and legal status of Al-Aqsa Mosque.” Prime Minister Naftali Bennett did not react to the ruling.

Public Security Minister Omer Bar-Lev said Oct. 8 that the police would appeal the ruling, which implies support for quiet Jewish prayer at the Temple Mount compound, warning the decision would "endanger the public peace and could cause a flare-up." Bar-Lev added, "The State of Israel advocates freedom of worship and prayer for all. However, in view of the security implications, the status quo must be upheld that the prayer of Jews on the Temple Mount will take place next to the Western Wall and the prayer of Muslims will take place in Haram al-Sharif."