My visit to Temple Mount

With hundreds of tourists, I visited the Temple Mount, and contrary to Palestinian accusations, Israel is not trying to change the status quo but cooperates with the Waqf guards during visits at the site. 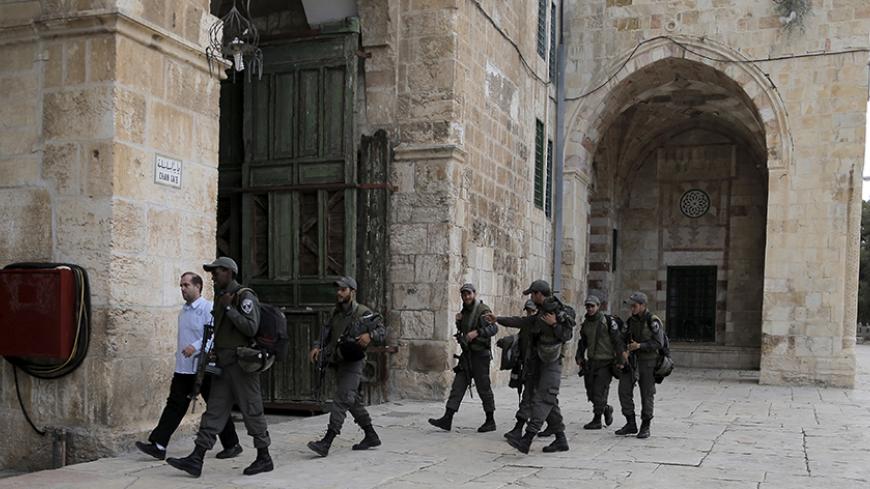 Israeli paramilitary police walk on the compound known to Muslims as the Noble Sanctuary and to Jews as Temple Mount in Jerusalem's Old City, Oct. 26, 2015. - REUTERS/Ammar Awad

I did not visit the Temple Mount for religious, political or ideological reasons. Rather, I came as a journalist wishing to know what the commotion is all about. I wanted to find out firsthand whether the Palestinian allegations that the Al-Aqsa Mosque is in danger are founded. Has Israel really changed the sanctified status quo at the Temple Mount or is it — as Israeli officials claim — the unbridled and deliberate incitement by the northern chapter of the Islamic movement in Israel and by Palestinian Authority (PA) officials that sparked the current wave of terror?

On Oct. 28, a day prior to my visit, Arab Knesset member Basel Ghattas from the Joint List, visited the Temple Mount despite a ban to do so that Prime Minister Benjamin Netanyahu imposed on Knesset members. Wearing a large hat to conceal his identity, Ghattas managed to fool the guards and sneak into the compound. “Israel continues to change the status quo and is intensifying its sovereignty and occupation there,” he alleged in the wake of his visit.

This was not my first visit to the Temple Mount. My personal photo albums contain pictures of the Temple Mount from the time when visiting the Al-Aqsa Mosque plaza was not a big deal. As a journalist, I used to come with a camera to cover the events at the compound, including a widely covered visit by senior Palestinian officials at the time when the PA was established. I recall the photographed visits of senior Palestinian officials Nabil Shaat, Saeb Erekat and others. But since then, tensions at the Temple Mount have intensified. Radical groups such as the Temple Mount Loyalists have started preaching for the construction of a third temple. Guidelines and directives were issued anew in a bid to dial down the tension, stop the deterioration and avert a flare-up. Every side hunkered down behind its positions in a series of control and power struggles, turning the Temple Mount into a volatile bone of contention that mixes political, diplomatic and religious motives.

Visiting the compound is possible only through organized groups or those that get organized on the spot. That’s why I asked to join a tour of the Temple Mount Heritage Foundation headed by right-wing activist Yehuda Glick, who heads the LIBA Initiative for Jewish Freedom on the Temple Mount. To my surprise, however, I discovered that I was the only tourist in the initiative, which is why I was privileged to have a private tour guide who gave me a detailed overview of the history of Jerusalem and the Temple Mount.

Orna — a certified tour guide and a secular woman — volunteers once a month, as do many other tour guides, to provide a free-of-charge professional tour “without religious, political and ideological agendas,” for anyone who wants to see the site and be informed.

When we arrived at the entrance gate another surprise awaited me: Hundreds of tourists from around the world were lining up, waiting patiently for the visiting hours. Buses packed with tourists parked close to the Western Wall parking lot. Column after column of visitors from different countries joined the long meandering line that sprawled all the way from the entrance to the Old City's Dung Gate. Naively, I thought that only a handful of people, mainly from right-wing Israeli groups that insist on changing the existing order, would come to visit this hot spot.

As it turns out, tourists have a priority accessing the compound. When a group of Jews gets organized, it has the last priority to enter. Jews wishing to visit the Temple Mount are assigned police officers, border police soldiers and Waqf security guards who make sure they bring no Jewish ritual objects whatsoever. They are also forbidden from praying, bowing, sitting down, quietly reciting prayers, bringing a prayer book, a photo of the compound or a Star of David. They are allowed to bring nothing that could potentially upset Muslim worshipers and stir up more tension. Before going in, Orna carefully stashed all the photos, drawings and maps she was carrying under the stairwell so as to meet the stringent visiting restrictions. Standing next to the long line of tourists were five Jews wearing skullcaps. Once organized as a group, they waited for the instructions of the security guards to let them in. After going through a rigorous security check at the entrance gate, they were assigned border police soldiers as well as Waqf security guards that surrounded them throughout the visit. As soon as they set foot in the plaza, the women of the Mourabitat (organized Muslim activists) started shrieking in loud voices: “Allahu akbar.” This was the first time I saw from up close the women who have been recruited by the northern faction of the Islamic movement in Israel and who receive pay for participating in the mission to “defend the Al-Aqsa Mosque.”

At the farther perimeters of the entrance, some 20 women in a religious study group were sitting down in a circle and reading the Quran. On a knoll across from there, outside the structure, were the Mourabitoun — the men — who were also having a Quran class. When they noticed the religious Jewish men they, too, started shouting in loud voices — which blended in with the yelping of the women — “Allahu akbar.”

Unflustered by those chants, the small Jewish group continued to walk slowly along the plaza all the way to the entrance to the mosque, which is marked by a strip on the ground. That’s where they stopped for fear that they would cross into an area that is prohibited. From there they proceeded to take another round along the plaza. Then they left the compound escorted by the guards and the Allahu akbar yelling.

I drew closer to the group of Mourabitoun men. I pulled out my cell phone and took their picture. All of a sudden a few Waqf guards showed up, demanding that I hand over my device, claiming that I had taken a photo of a sight that cannot be photographed.

“I have no objection deleting the forbidden photo,” I told one of the guards, who made sure I deleted all the photos showing the Mourabitoun and Mourabitat at the Temple Mount as well as photos of the Waqf security guards around the mosque. However, they did let me keep a photo of myself against the backdrop of the mosque. But then another group of Waqf security guards showed up with their commander (which is what I inferred from the tone of his voice and the orders he bossed around to his subordinates.) They demanded that I be removed from the Temple Mount because, according to them, I had violated the rules. “Nobody told me I couldn’t take photos of the worshipers,” I tried to explain. To support my argument, I added that I had taken the photos openly and in the presence of the security guards. “If I had known that you can’t take pictures of the Mourabitoun, would I have done so in front of your own eyes?” I wondered out loud.

Raising his voice, the commander of the Waqf detail said forcefully, “Get him out right now. Khalas! [That’s enough!] Out.” As they started escorting me to the exit gate, a border police soldier stationed at one of the security posts showed up where the altercation was taking place. At that point an argument about sovereignty at the Temple Mount ensued. “You have no right to remove any visitors from the plaza,” the soldier told his Waqf counterparts, who insisted on removing the “rogue tourist.”

One of the Waqf officials turned to me in English and said, “Here, we make the decisions. Here, we call the shots. Here, we are kings — the rulers.” He kept repeating the word “king” over and over. “Nobody can dispute what we say,” he argued. “We determine who comes in and who goes out and what they can or can’t do. We are the sovereigns at Al-Aqsa Mosque.” The border police soldier tried to calm him down, telling him that those were not the procedures and that decisions have to be made jointly. Yet, the Waqf guard insisted that they were the sovereign and that they had been explicitly ordered to banish me.

This ended my visit to the Temple Mount, from which I learned that if Waqf officials have the authority and ability to decide who gets to visit the compound and who fails to meet the threshold criteria, the Al-Aqsa Mosque is therefore not in danger.

As noted, Knesset member Ghattas alleged that Israel was deepening its control and occupation, yet I don’t understand what he saw. The Waqf security guards are densely deployed at the Temple Mount compound, going to great lengths to make sure that only small groups of Jews get to visit the site compared to the thousands of tourists that are allowed to visit almost uninterruptedly. While keeping order and security at the Temple Mount and at Al-Aqsa Mosque is shared jointly by Israel and the Waqf, the tension awards the Palestinian almost total control of who is allowed into the Temple Mount and who isn’t. This, of course, stands in total contrast to the Palestinian allegations that Israel has changed the status quo and that Al-Aqsa is in danger.

The Waqf security guards are Palestinians, mostly residents of East Jerusalem. Speakers of Hebrew, they get their salaries from the Hashemite Kingdom of Jordan, which funds the Waqf institute and by virtue of which is responsible for its security and functioning. Are the Palestinian allegations about a change in the Israeli policy and the tension surrounding the Temple Mount aimed, among other things, at creating new arrangements that would push the Jordanians out of the Waqf or at least weaken their standing and introduce Palestinians into the decision-making body?

The radicalization process and the power struggles raging at the Temple Mount have many causes. Undoubtedly, one of them is those Jewish organizations and movements that encourage pilgrimage to the site contrary to a long-held past perception prevailing amid Jewish law scholars that interdicted Jews from visiting the compound due to religious reasons. But from here to saying that Al-Aqsa Mosque is in danger, there is a great distance. What is going on right now is a political and not a religious power struggle to change the status quo, in which the PA and Israeli Palestinian groups are involved. Whether this stems from anxiety, fears or sheer incitement, this is nonetheless a political-diplomatic game with no holds barred. This time around, it is not Israel that is playing this game but the PA.

Yet, the greater danger is that if the current situation continues and spirals out of control, neither PA President Mahmoud Abbas nor Raed Salah, the leader of the northern chapter of the Islamic movement in Israel, or Waqf officials will be able to truly control the height of the flames.