Palestinian women have taken it upon themselves to protect the Al-Aqsa Mosque compound from the trespasses of Israeli extremists. 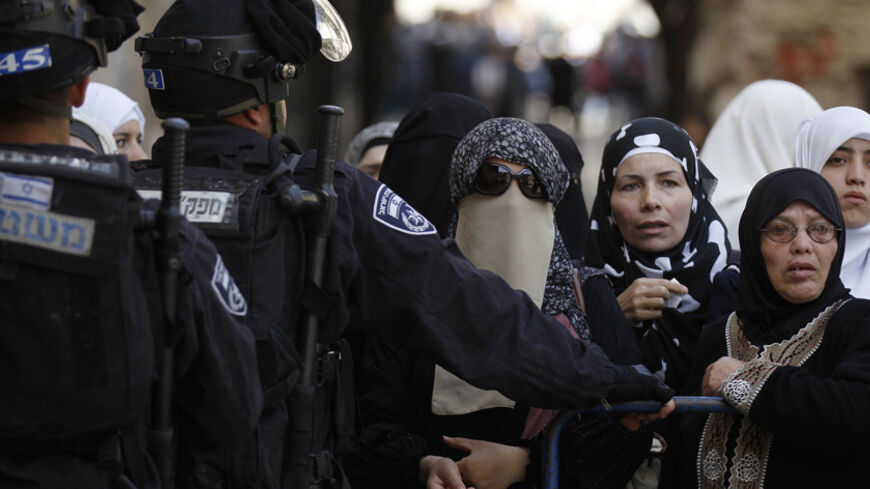 Israeli policemen prevent Palestinian women from entering the compound that houses Al-Aqsa Mosque and is known to Muslims as the Noble Sanctuary and to Jews as the Temple Mount, in Jerusalem's Old City, April 16, 2014. - REUTERS/Ammar Awad

While daily protests in East Jerusalem were triggered by the brutal July 2 burning alive of a Palestinian teenager from Shuafat, Mohammed Abu Khdeir, the emotional trigger for Palestinians has and continues to be the Al-Aqsa Mosque compound. Daily attempts by radical Israeli Jews to enter the Muslim holy place and lay Jewish claims to it continue to produce raw anger and rage.

In their efforts to quell Palestinian protests while adhering to the demands of extremists to further encroach on the mosque site, Israeli soldiers and intelligence officers have run into an unshakable and growing source of resistance.

They are mostly older women, mothers with grown children and many grandmothers who have taken it upon themselves to protect the mosque compound from Jewish worshipers simply with their physical presence. The women, commonly referred to as “mourabitat” (roughly translated, steadfast) basically hold group classes in the mosque courtyards and keep an eye on Jewish extremists attempting to pray. The status quo allows Jews to enter the courtyards on the same basis as foreign tourists. This means they are allowed to visit during non-Muslim prayer hours as long as they are modestly dressed. Attempts by Jewish fundamentalists to pray in the mosque compound are not allowed.

The women have organized themselves in three levels of classes: Literacy class for those needing to learn, read and write, general high-school level classes and university level advanced courses. They also learn Islamic tajweed, the musical chanting of Quranic verses. They set up plastic chairs and tables near the Mograbi gate, which has been a target of UNESCO oversight missions. It is the only gate to the mosque area that is controlled solely by Israeli police. All other gates have a joint guard of armed Israeli police with unarmed Islamic waqf guards, who are on the payroll of the Jordanian Ministry of Religious Endowments and Islamic Affairs.

Whenever groups of Jewish extremists enter, the women begin to chant Islamic verses. If the Jewish groups are seen attempting to pray, the women shout the Islamic religious phrase of Allahu Akbar (God is Great).

The stories of these women were vividly captured in a documentary produced by Palestinian director Sawsan Qaoud and shown on the Al-Jazeera Documentary channel. The women have become so effective in standing up to the attempts to force Palestinians to accept sharing the mosque compound with religious Jews that the Israelis arrested some and have even used some of the draconian emergency laws against them to prevent them from entering the mosque compound.

Zinat Jallad, one of the mourabitat grandmothers, spoke to Al-Monitor about the daily humiliations and pressures that are being used against them. “For 10 months, I was prevented from entering the mosque to pray even though I was never given any paper nor was I able to see a judge.” The documentary, titled “The Women of Al-Aqsa,” shows numerous times in which the Israeli police take these women’s IDs, enter them into a hand-held tablet and refuse them entry into their place of worship. In one scene, Muntaha abu Sneneh, one of the teachers and leaders of the women’s group, was in tears after being denied entry to the mosque on a Friday while others were allowed in.

Palestinian Israeli Knesset member Haneen Zoubi has protested the harassment and how women are being kept from practicing their right to pray in their mosque. She wrote to the Israeli Interior Ministry that this harassment constitutes a “dangerous precedent” and must be stopped.

Jallad said that these unauthorized deportations continued for 10 months, but apparently ended, she thinks, when the Israeli police chief in charge of the mosque area was replaced. However, new methods of control were instituted.

“Whenever there are Jewish holidays or news that Jewish groups are expected to enter, sometimes they ban all women from entering or they confiscate our IDs at the mosque gate,” Jallad told Al-Monitor. The women’s IDs are returned later, but sometimes the women have to go to the police station to claim them. The confiscation of IDs has had a chilling effect on many women; nevertheless, the mourabitat are still steadfast, she said.

Speaking to Al-Monitor by phone, Jallad said that the mourabitat, along with some youths, were successful twice in the last week in preventing some of the extremist Jews from entering and praying in the holy Islamic mosque area.

The efforts of these women, however, have not been without cost, as Israeli soldiers have arrested many of them during the past week. Jallad said that Samiha Shaheen, one of the mourabitat women, was arrested Oct. 26.

While religious women have taken on the mantle of defending the mosque, many other Palestinian women are also active in many ways. Sabreen Taha, a 24-year-old resident of the Old City of Jerusalem, told Al-Monitor that Al-Aqsa Mosque is an important symbol that must be defended. But she said troubles in East Jerusalem were not restricted to the mosque area. “I try and take people interested in the situation on alternative tours throughout Jerusalem to show them the depth of the problem in the city,” she said. Taha talked about the youth in the nearby neighborhood of Silwad who have resorted to using fireworks at night as their way of protesting Israeli oppressive practices and the Jewish settlers who have recently taken over homes in East Jerusalem's Silwan neighborhood. Israel announced on Oct. 26 the deployment of an additional 1,000 policemen in the city in an attempt to use further force to quell Palestinian anger and protests.

Jallad talks about the humiliation faced by women when their IDS are taken away and they are denied entry. But she insists that she and other women are not shying away from the mosque. “For me, Al-Aqsa is more important than my home. We now know our rights and we will insist on them, “she says.

“We want to study, we want to teach and we want to pray in our mosque. We have hurt no one and we are not doing anything wrong,” she added.