Who are Temple Mount's Mourabitoun?

In an Al-Monitor interview, a female Muslim activist discusses her organization's perspective on defending the Al-Aqsa Mosque compound against what it views as encroaching Jewish pilgrims and activists. 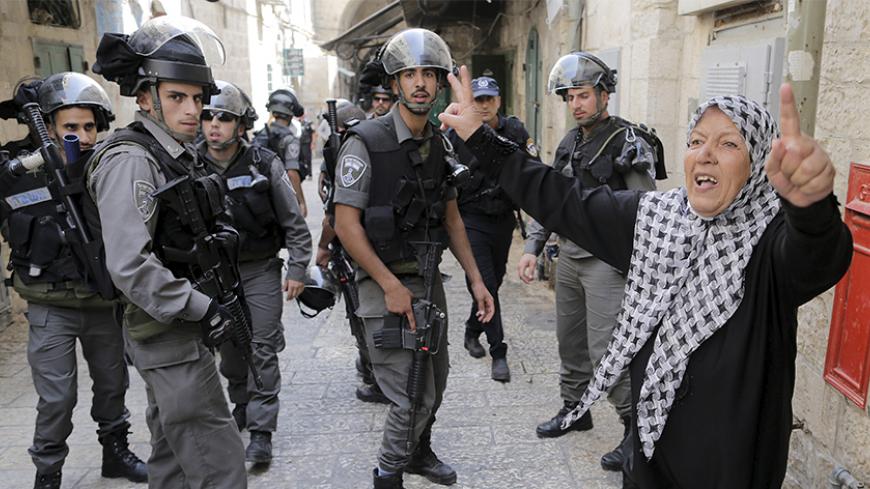 Israeli policemen prevent a Palestinian woman from entering the compound that houses Al-Aqsa Mosque, known by Muslims as the Noble Sanctuary and by Jews as the Temple Mount, in Jerusalem's Old City, Sept. 14, 2015. - REUTERS/Ammar Awad

The battle over the Temple Mount is heating up. It is no longer just an occasional violent clash between Muslims and Jews, but daily battles with increasingly violent and growing numbers of participants. Loyal “soldiers” in “God’s army” are deployed on both sides, willing to sacrifice themselves in the religious war being waged over one of their holy sites.

Heading the Jewish side is Yehuda Glick, chairman of the Temple Mount Heritage Foundation who narrowly escaped an assassination attempt in Jerusalem last October. On the Muslim side are two organizations acting together, one for men, one for women, who call themselves the Mourabitoun and Mourabitat, respectively. Their names are taken from a phrase in the Quran that obliges every Muslim to be a “mourabit” (defender) of Islam’s holy places and to protect them against heathens who threaten to desecrate them. As the struggle over the Temple Mount, or Haram al-Sharif (Noble Sanctuary), escalates, with the Muslims perceiving a real threat to Al-Aqsa Mosque, the number of male and female recruits has grown. The police and General Security Agency (Shin Bet) put their numbers at more than 1,000 women and hundreds of men, who are paid up to 4,000 Israeli shekels ($1,040) a month for their activism.

The funding is provided by Islamic charities, mainly the northern branch of the Islamic Movement, headed by Sheikh Raid Salah, who apparently conceived of the idea and jump-started the organizations’ activities. Israeli security services claim that Hamas also funnels money to the organizations. In November 2013, Shin Bet shut down the Jerusalem offices of Amara al-Aqsa, claiming that the organization served as a conduit for funding activities at Al-Aqsa, including those of the Mourabitoun.

On Sept. 9, acting on a request by Minister of Internal Security Gilad Erdan and the recommendation of Shin Bet, Defense Minister Moshe Ya'alon designated Mourabitoun and Mourabitat illegal organizations. The state’s attorney general validated the decision based on the determination of the security services that the groups were largely responsible for inflaming and fanning violence in Jerusalem in general and on the Temple Mount in particular. Outlawing the groups allows the state to prosecute anyone participating in their activities or donating money to fund their operations.

Therefore, activists in both organizations who in the past made no secret of their mission — to defend the Haram al-Sharif against Jews — are now treading carefully, concealing their involvement in the organizations and claiming that they are acting independently as individuals. The activists now say they are combining Quranic study with independent action against provocations by Jewish organizations that violate, so they claim, the sanctity of Al-Aqsa Mosque.

After I identified myself as a journalist, a central Mourabitat activist and resident of East Jerusalem asked me, “How do I know you are not a Jewish policeman or a military man wanting to interrogate me and get me in trouble with the law?” It took a lengthy conversation to convince her to be interviewed by Al-Monitor, with a promise that her name would be withheld. I shall call her “Mourabita.”

“There is a Hadith [religious teaching] in the Quran that says that anyone praying out of true belief is a mourabit, whether they pray at home, at work or at a mosque,” she explained. “Everyone is obliged to guard against desecration. In the holy Quran, it says specifically, ‘In the name of Allah the merciful and compassionate, be ready and willing to defend the places holy to Islam.’ This is a commandment that must be obeyed.”

Mourabita said that her fellow mourabitat stay in the classrooms at Al-Aqsa Mosque and the adjacent houses of prayer, holding lessons in the Quran and Hadith. Outside, the men of the Mourabitoun fan out across the compound, operating in shifts. When Jews are spotted arriving on the mount, the men signal a lookout standing next to the women’s classroom to call the women to action. The mourabitat, dressed in black, their faces veiled, repeatedly call out in unison, “Allahu Akbar” (God is great), to scare off the Jewish pilgrims in a type of psychological warfare.

The division of labor between the men and women has an operational origin: Only women can walk around the compound with their faces covered, meaning that police cannot identify them. They are instructed to refrain from physical confrontations with the Jews and the police to avoid the risk of arrest.

The activists from the Jewish organizations who go up to the Temple Mount claim that the police abandon them to their fate, refusing to protect them, even though it is within their legal rights to visit the Temple Mount once a month as ruled by the Jerusalem magistrate’s court in June 2015 following the submission of a petition by Glick.

The text of the interview with Mourabita follows:

Al-Monitor:  How is your job defined? It’s not just about prayer, is it?

Mourabita:  Those who come here as innocents [tourists] and visitors, we greet with words of welcome to Palestine and Jerusalem, but to the occupiers we say, “Get off our land.” They should go away from our Al-Aqsa. We fight mainly against the settlers. I have been living in Jerusalem for 43 years. Where were they? In the past, when they wanted to come to Al-Aqsa Mosque, the police would prevent them from coming and would even remove them by force. But 10 years ago, things started changing, and now they have reached a boiling point. All the time, they want to occupy another piece of land, and another piece of land, and to change the situation. You know, even the rabbis used to say that religious Jews are forbidden from going to Al-Aqsa Mosque. Now they come on a daily basis. Why? Once there was no trouble between us and the Jews, now the situation is about to explode. Every day there is a big mess.

Al-Monitor:  Are you not worried that the police will now change their attitude toward you?

Mourabita:  We are only afraid of Allah. To defend the sacred Al-Aqsa Mosque, we are willing to be “shahids” [martyrs], to die for a sacred cause, for the sanctification of God.

Al-Monitor:  According to the decree by the minister of defense, you are the ones making the mess and stirring things up. How do you feel about that?

Mourabita:  What are the mourabitat doing? Are they cutting down [olive] trees? Are they destroying houses? Are they building settlements or preventing others from building their homes? The mourabitat sit in Al-Aqsa Mosque so that the whole world will see and hear. They study the Quran, study Hadith, and when a settler arrives, they call out loud together, “Allahu Akhbar, Allahu Akhbar.” You tell me, as a Jew, if a Muslim walked into a synagogue in which you were praying, would you be accepting of someone bothering you while you are at prayer? Of course not. That is what guides us in protecting the holy Al-Aqsa Mosque.