Glick continues his campaign to bring Jews to Temple Mount

Talking to Al-Monitor, activist Yehuda Glick, who preaches for Jews to ascend the Temple Mount, says that following his yearslong activity, thousands of Jews have visited the compound and many rabbis have stopped being opposed to it. 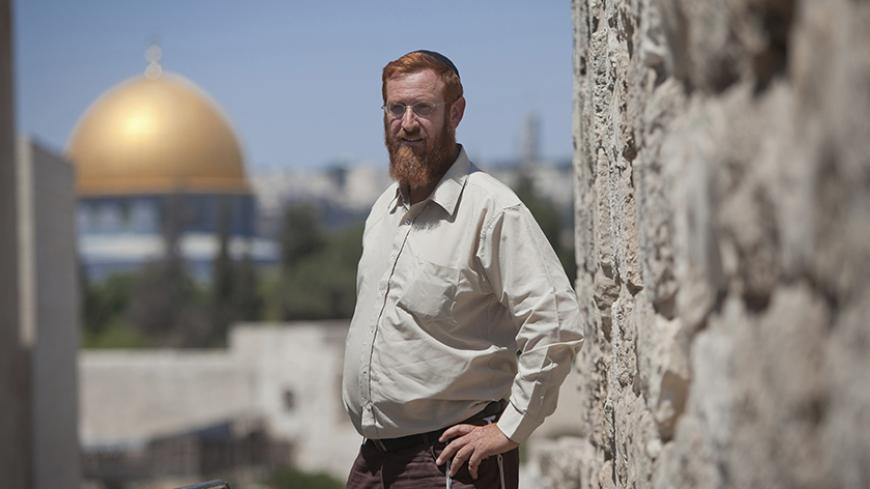 Yehuda Glick, an activist with the Temple Mount Heritage Foundation, poses for a photo in Jerusalem, June 30, 2011.

Yehuda Glick, a Likud member and chairman of the Temple Mount Heritage Foundation, gets angry when people suggest that were a third intifada to break out, he would be the person primarily responsible for it. He rejects the notion that the visits by Jews to the Temple Mount he has been promoting for the last 10 years are the cause of the high tensions between Jews and Arabs in Jerusalem in general and in particular on the Temple Mount, or Haram al-Sharif to Muslims.

Glick himself has been prohibited from visiting the site since the attempt on his life in October 2014. At the end of the annual conference of Temple Mount loyalists held at the Menachem Begin Heritage Foundation in Jerusalem, he was shot and seriously wounded by Muataz Hijazi, a resident of the Abu Tor neighborhood, in East Jerusalem. “They tried to get me to stop,” Glick told Al-Monitor. “If God spared me, he apparently thought that my mission had not been accomplished yet.”

The pilgrimage of Jews to the Temple Mount if for Glick a mission of paramount importance, although he stresses that an avenue for peace and understanding between Jews and Muslim Arabs must be found to allow religious coexistence at the site, which is holy to both religions. Meanwhile, the Temple Mount Heritage Foundation continues to organize trips from all over Israel for Jews wanting to visit the Temple Mount. Another Glick-led organization, the LIBA initiative for Jewish Freedom on the Temple Mount, trains people to be tour guides at the site. “Every day there’s a guide on our behalf who escorts Jewish groups visiting the Temple Mount,” he said. “I give talks around the country and encourage people to come and visit the place.”

Al-Monitor:  How can you attain coexistence at the Temple Mount?

Glick:  There is a very successful outline [for separate praying hours] that was implemented at the Cave of the Patriarchs. Unfortunately, it was established after a terrible attack by a Jew — Baruch Goldstein from Kiryat Arba — who murdered 29 Arabs in February 1994. And it was after the murder that people realized that things should be regulated in order to allow both sides to pray separately and avoid friction. It’s a shame they don’t apply the outline of the Cave of the Patriarchs also to the Temple Mount, and it’s a shame that this will only happen once blood is shed there too.

Al-Monitor:  In August, you met with the prime minister to discuss this. What did you propose to Benjamin Netanyahu?

Glick:  I proposed to him to set up a committee that will try to find a peaceful solution and prevent the daily friction. I even suggested appointing professor Yedidia Stern [vice president of the Israel Democracy Institute] as the committee’s chair. The committee could hold discussions with Jews, Arabs and Jordanian officials who have a vested interest in the Temple Mount. Prime Minister Netanyahu expressed interest in my proposal and noted that threats to my life were being made all the time. “There’s real intelligence about people who want to hurt you. Be careful,” the prime minister told me.

Al-Monitor:  Did Netanyahu ask you to dial down the intensity of your activity to reduce tensions in Jerusalem?

Glick:  At no point during the conversation did the prime minister try to dissuade me from my activity. He listened to my explanations and warnings about the Mourabitoun activists, who stage provocations at the Temple Mount. He also repeated 10 times at least the fact that I had to be careful and that people want to kill me.

Al-Monitor:  Do you get threats against your life?

Glick:  I get threats every day — on Facebook, via text messages and emails. Just today I got such a message: “I would like to inform you that your day of being sent to hell, just as we did with [Meir] Kahane, is fast approaching. Last time you escaped it miraculously … Next time we will do a more accurate job as we did with Rehavam Ze’evi [the Israeli minister assassinated in October 2001]. Signed: Imad al-Assam.”

The pilgrimage of Jews to the Temple Mount picked up momentum also thanks to another dear Jew, Mark Zuckerberg, the founder of Facebook. Thanks to his social network, we are able to reach out to larger audiences that were hard to access before.

In addition, religious groups that joined the Likud Party ranks have raised the curtain on the issue, making it mainstream. I agree that what was once considered an obsession by a handful of people has become prevalent among many. And I’m not feigning modesty. I was present at all these junctures and used all the tools to give the idea a serious push.

Al-Monitor:  You set up a lobby that was able to convince Israeli decision-makers to outlaw the Mourabitoun movements. How did you go about this?

Glick:  Three years ago, I wrote to the minister of public security [Yitzhak Aharonovitch] that there were Muslim groups screaming every time we went past them. He dismissed me uncouthly and wrote some unpleasant things about me. I also turned to him two days before I was shot and told him, “Sir, blood will be spilled here.” He told me to relax and that everything was under control, until we got to the point where the Al-Aqsa Mosque — a place for worshipping god — had become a munitions cache and a war room.

We submitted a detailed letter to Gilad Erdan, the current minister of public security, about the Mourabitoun’s conduct, its funding methods, the key activists in the organization and the transportation array that was set up to take men and women — Israeli Arabs — from the north and the south to the Temple Mount. All the detailed information was taken from open sources and gathered by the foundation. Just as they follow our activity, we follow and study theirs as much as possible.

Al-Monitor:  Your foundation is thriving, yet you are banned from visiting the Temple Mount. How do you fill in the blanks?

Glick:  I walk around feeling I have been through two assassination attempts. One was momentary and surprisingly unpainful, as I immediately lapsed into a coma. The second one was very painful. My demonization by the Israeli police is difficult for me. The Temple Mount is at the core of my life. I used to go there four, five times a day. It used to be my breath of fresh air. That’s my lifeline, and they’ve taken it away from me.

Al-Monitor:  It’s designed to keep you out of harm’s way.

Glick:  If anyone wants to protect my life, they should assign a bodyguard to me. The trick is not to keep the victim away while letting terrorism have its way.