Members of Benjamin Netanyahu's government are using the Temple Mount for political purposes, advocating the return of the Jewish people to the holy site at the risk of damaging the fragile status quo. 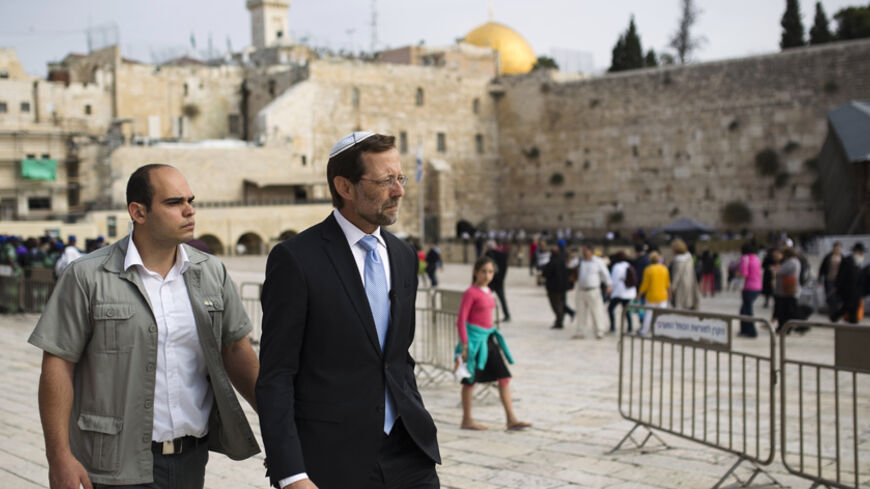 Moshe Feiglin (R), Israeli Knesset member from the Likud Party, walks near the Western Wall after visiting the compound known to Muslims as Noble Sanctuary and to Jews as Temple Mount in Jerusalem's Old City, Nov. 2, 2014. - REUTERS/Amir Cohen

A major event occurred in Israel this past weekend: Prime Minister Benjamin Netanyahu issued a special announcement on Nov. 1 calling on all Knesset members “to work to calm the situation on the issue of the Temple Mount and show responsibility and restraint.” The statement also said that Netanyahu had talked to Knesset Speaker Yuli Edelstein and asked him to ''work with the Knesset members on the issue.''

Indeed, this is a tremendously important move in the days following the assassination attempt on Temple Mount activist Yehuda Glick in Jerusalem. Netanyahu did well in asking Edelstein to restrain politicians who use the Temple Mount to grab another headline and satisfy another Likud Party central committee member on the backs of residents whose city is in flames. Unfortunately, Netanyahu addressed the issue only after a Palestinian terrorist shot a Jew, thus signaling the start of a new hate and incitement wave. As these words are being written, Netanyahu has yet to ''work on the issue'' with his own Cabinet member, Housing Minister Uri Ariel. Ariel has made a public commitment that the status quo of the Temple Mount would change.

It would be interesting to know how the conversation went between Edelstein and his Likud faction colleague Moshe Feiglin, the serial Temple Mount worshiper. What did Edelstein tell coalition Chairman Yariv Levin, who has said that when Jews prayed for a return to Zion, they probably did not dream of a return to the Knesset building or the prime minister’s office, but to the Temple Mount? How did the conversation go with Foreign Affairs and Defense Committee Chairman Ze'ev Elkin, who stated two years ago that without the Temple Mount “our national freedom is not complete.” And did Edelstein implore Deputy Transportation Minister Tzipi Hotovely to recant her proposal for erecting a temple on the Temple Mount “as a symbol of the people of Israel’s renewed sovereignty over their land”?

Of special interest is what Edelstein has to say today about what he himself wrote about the Temple Mount in February 2012, when he served as minister of public diplomacy and diaspora affairs: “My job is to deal with the day-to-day process, which connects and builds the people of Israel, leading to the Temple [Mount].” And indeed, in the current Knesset, the Temple Mount has become an almost daily issue for debate.

Since May 2013, the Internal Affairs Committee has held no less than 15 debates on the issue of Jewish entry to the Temple Mount and prayer there. By way of comparison, in all of the preceding 10 years, only five debates were held on the same issue. By the way, left-wing Knesset members were not present at most of these debates — the left-wing Knesset members, for some reason, permit themselves to abandon this important arena. But turning the Knesset Internal Affairs Committee into ''the Miri show'' (as in Knesset member Miri Regev, chairwoman of the committee) does not exempt responsible elected politicians from the obligation to balance the horror show staged at the committee over and over again by the right.

A position paper prepared by the nongovernmental organization Ir Amin ahead of the debate on Oct. 27 at the Internal Affairs Committee illustrates the constant expansion of limitations on Muslim access to the compound. Talks and acts such as these fuel Palestinian fears that Israel is planning “a Hebronization of Haram al-Sharif.” In other words, allocating set prayer hours for Jews-only prayers at the site, at the expense of Muslim exclusivity, like the arrangement at the Tomb of the Patriarchs in Hebron. During that debate of the Internal Affairs Committee, Minister for Homeland Security Yitzhak Aharonovitch related the following astonishing data: Since the beginning of the year, the entry of Muslims to the Temple Mount compound was prohibited or restricted 76 times — one day out of four. By way of comparison, in 2012, Muslim entrance to the Temple Mount was prohibited on three occasions and in 2013, on eight occasions.

Such a move is perceived as a declaration of war over the last Jerusalem bastion that expresses the national and religious identity of most Palestinians. There was a good reason that US Secretary of State John Kerry called Netanyahu and urged him to act decisively to prevent a violation of the status quo at the compound.

There is something more than symbolic in the fact that the conference titled “Israel Returns to the Temple Mount,” at the end of which Glick was shot, was held at the Begin Heritage Center. The late Prime Minister Menachem Begin was a member of the national unity government headed by Levi Eshkol. This government adopted the 1967 status quo rules, according to which the Muslim Waqf would be in charge of the civilian and religious aspects of managing the Temple Mount and non-Muslims would not be allowed to pray there — not as a group and not as individuals. The same year, that same government ordered the Israel Defense Forces’ chief rabbi, Shlomo Goren, to stop organizing prayers on the Temple Mount.

The process of religious nationalization that the Likud Party under Netanyahu’s leadership is undergoing — what professor Yeshayahu Leibowitz typified as “the prostitution of religion for the sake of national interests” — reaches its zenith at the Temple Mount.

Unfortunately, the thaw in the diplomatic process between Israel and the Palestinians — a process to which Kerry contributed greatly — is not a magic cure for the aggressive violation of the status quo on the Temple Mount. On the contrary. In the 1970s, right-wing activists planned to damage the Temple Mount mosques, hoping that the ensuing chaos would thwart the separation of forces agreement with Egypt in the Sinai Peninsula. Journalist Nadav Shragai, who authored the book “The Mountain of Disputes: Conflict over the Temple Mount," wrote in 2004 in Israeli daily Haaretz about a 1981 convention of the movement to stop the withdrawal from Sinai, a year before the evacuation of the Yamit settlement. One of the rabbis at the event spoke about “a resonating action on the Temple Mount … for example, bringing 10,000 people to the Temple Mount and not leaving until the withdrawal is canceled … and perhaps something even more radical.”

In September 2000, at the height of the Ehud Barak government’s attempt to save the peace negotiations with the Palestinians, which had derailed at Camp David, Likud leader Ariel Sharon decided the time was right to visit the Temple Mount. The widely covered visit, on which he was accompanied by some 1,000 police, started the second intifada. Some, like Yossi Beilin, who served as justice minister at the time, claim that the visit was the match that lit the fire.

Less than five years later, the plan to damage the mosques re-emerged. This time, it was intended to thwart Prime Minister Sharon’s disengagement plan from the Gaza Strip in 2005. Hezi Kalo, who headed the Shin Bet’s Non-Arab Affairs Division in the mid-1990s, was quoted in the article by Shragai as saying that a future Jewish terror attack on the Temple Mount was possible to derail a diplomatic process.

On Nov. 4, 1995, a Jew assassinated the prime minister of Israel to sabotage chances of an arrangement between Israel and the Palestinians. On Feb. 25, 1994, a Jewish doctor murdered 29 Palestinians while they were praying in the Tomb of the Patriarchs, in an attempt to stop the second Oslo Accord. And back in 1969, there was Michael Dennis Rohan who set fire to the Al-Aqsa Mosque, and in 1982 the immigrant Alan Goodman set out on a killing spree on the Temple Mount.

The best intelligence agencies in the world cannot locate the lone terrorist who sets out to damage the site revered by Jews and Muslims. There will always be zealots on each side who will pour fuel on the fire. Absent courageous adults in the political leadership, who are willing to reach a diplomatic accommodation, religious figures must reach a religious understanding. They must formulate a treaty recognizing the affiliation of both religions to the Temple Mount and create a joint mechanism for extinguishing the flames in emergencies. The welfare of the two people is too dear to be abandoned in the hands of wheeler-dealers, false prophets and the mentally ill.